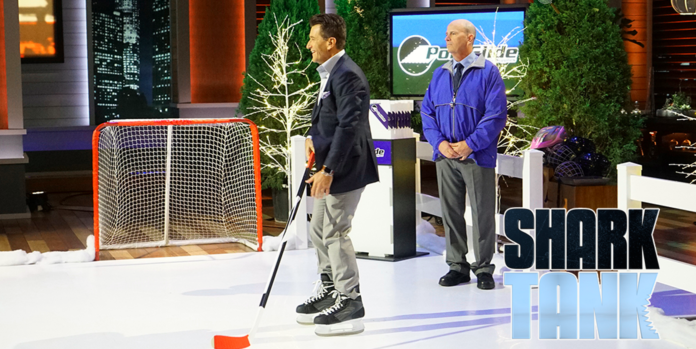 Before he began the PolyGlide Synthetic Ice ice company, Jim Loughran was your typical hockey dad. Every year in the winter, he would try making an outdoor skating rink for his kids. Unfortunately, it never lasted longer than 3 weeks at the most. Jim decided to research other options and found out that you could use polymers as a skating surface. The 1st thing he put together looked more like a giant cutting board, but he thought it would be a good idea to have the option of panels. In the 3 years before he appeared on Shark Tank, he was able to generate $1.3 million in sales. Let’s see if this will impress the Sharks so much that they invest. 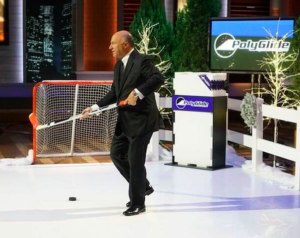 As the narrator said that the next business into the Shark Tank has a new way to do a favorite winter activity, a family dressed in hockey gear skated out onto the stage. A man walked up out of the group and greeted the Sharks. He introduced himself as Jim Loughran. Jim asked for $150,000 in exchange for 20% equity in his business. He said that he was here today to bring the skating rink home. He said that PolyGlide Synthetic Ice makes it easy to do that.

Jim stated that there is no need for refrigeration, and the customer didn’t even need ice. He illustrated clicking unlocking the ice panels together to convert any playroom, patio or garage into a home skating rink in a matter of minutes. Robert nodded in appreciation. Jim said that Polyglide was good for practice saying to be the next great player in hockey or the next Olympic gold medalist you’d be able to do all that at home. He had the kids illustrate what he was talking about, then skate offstage. He ended his presentation by asking who wanted to invest in a business that was guaranteed to score.

Barbara was 1st up, asking Jim where people really used Polyglide. Jim said that she would be surprised as to how many people are willing to convert the garage space into a rink for their kids to practice. Barbara said that she thought that that was great until she saw a hockey puck flying into the air and breaking something such as a window. Mark stated that not everyone uses it for hockey. Robert asked what people used it for. Jim said people use it for figure skating practice without going back and forth to the rink. They could set up the skating rink in their own garage.

Robert excitedly said that he had seen the product before. He wants to know what was different between Polyglide and other products like it. Jim stated that other products don’t have the scaled-down many panels, and claimed that no one else sold them. Kevin clarified, asking him if he was saying that his competitors were only commercial sized where is he was seeking residential customers. Jim said that that was correct. Market asked if he was just selling in smaller configurations, and Jim said that he had to change the size and the design of the product. He said that he also infused the plastic with the lubricant.

Kevin said that this concept was already tried in hockey arenas. Jim claims that he couldn’t just classify it as a hockey product. Mark said that whatever it is there was a certain feel when you’re on the ice versus something else. He asked if there is a difference between the ice and Polyglide. Jim said yes, and said that that was why he had infused his product with lubricants so that there is less restriction. Robert asked if he could come up and try it, and Lori asked him to hand out samples.

Robert got up and started sliding on the Polyglide, and he was able to put on skates and try it. Lori asked if you need to use special skates, but Jim said that it was a normal ice-skating skate. Jim handed out to different pieces to each Shark. One was infused with lubricant, the other was dry. Lori told him that the one that was lubricated felt like smooth ice, where the others felt like artificial plastic. Robert started skating, and Barbara got worried about him and told him to be careful. Robert tried to get fancy with his moves, and he almost fell. He skated up and down the hallway, and then went back to his seat.

Mark said that a tennis court would be a standard configuration that everyone understands. Jim said that 30′ x 50′ is $8 a square foot. Robert said that that would be about $15,000. Kevin asked Jim if he didn’t really know the answer to that question. He posts the scenario of calling Jim on the phone to ask him that if he had a tennis court how much it would cost to fill it with Polyglide panels, and Mark Cuban cut him again to say that would be $15,000 give or take. Kevin asked if he needed Mark Cuban on the phone in order to figure out the math. Jim insisted that no one wanted a rink without large just to skate at home.

Mark Cuban said that he was going to need to see a little bit more energy. He told Jim that millions of people were going to see this episode, and he couldn’t just be half fast about it. He said that it was his show. Jim kind of nodded placidly. Mark continued, stating that it had to be the most important thing to them in the world, and he had to sell it that way. Jim looks like he didn’t really get it. Lori asked him to tell the Sharks why he was better than anyone else making artificial ice. Jim said that it was because the product he developed his infused with lubricant and it gives the best performance. He said that this process was proprietary.

Mark said that he shouldn’t have to pull teeth in order to get him to say things like that. He said that he had to be aggressive in order to be able to repay the investment and make him an investor a lot of money. Mark said that he didn’t get that sense, so he went out. Kevin was up next, saying that no retailer was going to bring 1000 pounds of Polyglide slabs into their store, and it would be very hard for customers to take home enough in order to make a rink. Kevin said that it was a good business for Jim, but he couldn’t see it scaling as a product. Kevin went out.

Lori told Jim that Polyglide was a clever idea, but she likes to invest in things where she knew it was going to reach a large number of people, and have a mass appeal. She thought that it didn’t, so she went out. Barbara asked him if he had played hockey himself, and Jim said sure. Barbara said that he needs to change up his game big time. Barbara said that when she was 1st selling real estate, everyone loved her and wanted to spend time with her, and then they actually purchase the house from the next person. Barbara said that that was the moment she realized that she had to reach into herself to get excited and show energy. Barbara said that that was the point where she started to sell better than everybody. She said that she wished that Jim had come into the Shark Tank with his hockey helmet on and had been more aggressive about his selling technique. Barbara went out, citing his lack of energy as the reason. Jim thanked him.

Robert was the last Shark left. He looked pensive. He said that he really love the product, but he felt that Jim was going to need sales help. Robert said that he was going to need a lot of help, and he was one of 6 competitors. Robert didn’t see the wide scale of the product, so he was out. Jim thanked everyone, not showing much emotion. In his post-interview, Jim stated that if he had a 2nd chance he would go in and light the place up. Jim said that even though the Sharks couldn’t tell, he was aggressive when he was selling his product. Let’s see how Polyglide without a Shark Tank deal.

PolyGlide Now in 2018 – The After Shark Tank Update 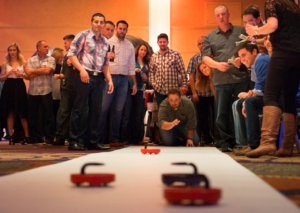 Even though Polyglot might not have mass appeal, it does have amazing reviews from the people that have purchased it. 87% of customers that purchased it on Amazon have rated it 5 stars. Customers stated that the ability to add size as they go, or the affordability as the main reason for purchasing. Customers also stated that when they had questions, the company was very responsive. On Amazon, the product sells for $275 for a pack of 4 panels, which is a good starting size. Polyglide synthetic ice also is sold on their website, where you can find it in different size panel packages. Click here to check it out.