Brad has been in the printing business for a while. His family owned their own printing company, and one day they received a custom tissue paper order from a customer that needs to be done within 48 hours. Brad was able to complete the order and was excited about the prospect of forming their own company, which turned out to be Digiwrap. They were able to do get in with Zazzle, and also sell their custom tissue paper on their website. They made $350,000 in their 2nd year of business. Let’s take a look and see if this will impress the sharks enough in order for them to get a deal. 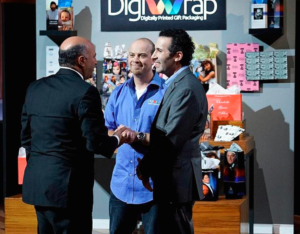 Two well-dressed men walked out into the Shark Tank and onto the stage. They faced the Sharks and introduce themselves. They said that they were there representing Digiwrap, and were requesting $150,000 in exchange for 10% equity in their company. Charlie insisted that Digiwrap was the only company that was taking gift bags and tissue paper to where it’s never been before. He said that everyone did the same thing, getting a boring bag, stuffing tissue paper and it, ends being done with it. Brad stated that in the new world of technology that was no longer acceptable.

Charlie moved the barrier that was blocking their real set up. On the table was a bunch of personalized gift bags with the Sharks faces on them. The sharks laughed and made impressed noises. Brad said that their unique processes allowed them to create bags and tissue the way no one else can. Digiwrap was able to produce a one-off bag, and customize it on demand. He also claims that customers would not have to wait a week or more to obtain their products. A buyer could get any amount of bags that they needed, and receive it in a few days. Charlie told them that everything was made right in America.

Charlie stated that Digiwrap was all about making gift wrapped personal, and ended his presentation by asking the sharks who wanted to go and get a deal wrapped up. It was a pretty bad pun. Barbara told them that their idea was very cute. Brad began to pass out personalized gifts for each of the sharks. He urged them to take a close look at each of the bags as there is quite a bit of detail in them. Lori stated that the bags had very nice pictures of them, and they were good quality. Robert stated that at their corporate events they gave out bags with the logo and a picture on it. Brad explains that it was possible to get large runs of bags like that, but no one currently is doing small batches of photo bags.

Kevin thought that that claim was outrageous. He said that there is at least 5 different platforms to do that on. Charlie explained that when they said small batches, they meant one-off bags. Barbara didn’t understand why someone would pay for just one bag. Charlie said that it would make a gift completely personalized. Barbara asked him what Mark would end up paying for that bag. Brad explains that the bag would cost about $10. Robert clarified that their advantage was that they can do extremely small runs since he would be able to easily find people to do it on a larger scale.

Charlie said that he wants to point out that they did have custom tissue paper in there as well, and that was unique to them. He said that they currently have 2 lines of business, the online site with a focus on tissue paper, but they also work with the large online retailer where they do wholesale orders. The Sharks asked which large online retailer and Brad told them that it was Zazzle.

Charlie said that they were on track this year to do $500,000 in sales. Robert wants to clarify that that was for the tissue paper, but Charlie explained that was for both the tissue paper and bags. Kevin said that Digiwrap takes innovative printing technology and scales out millions of sheets, and makes it easy for a simple order and the everyday consumer. Brad told him that that was a very assisting description of it. Kevin wants to know more about the numbers. He asked them how much they cost to make, and how much they sold it for her. Brad said that cost them an average of $.50 to make it and they sound so it for an average of the dollar. Kevin told them that the value of their company is not that exciting if they were just a supplier to a single customer.

Robert asked Charlie where the breaking point was for business to go to a competitor. He said that they were living almost on the fringe of the printing business. He said that was a unique problem that they had since if a customer becomes too big, it would be better for them to seek out another business. Robert said that it would work on a site where it would be part of something else such Zazzle, but it didn’t make sense for them to build their own company and acquire the customers. He thought it was going to be too tough to go large. He complimented them by saying that it was a beautiful product, but he still went out.

Mark Cuban said that Robert’s point was right on. He felt that it would take too many deals in order to get to a size that would make it worthwhile for him to invest. He told them that the challenge as an investor is being able to see a real rate of return. He said that if he provides them with the $150,000 that they were asking for, and they grew the business 5 times it was nice for them, but not as much for an investor. Mark went out. Brad thanked him for considering it.

Barbara told the entrepreneurs that she didn’t think that there is enough of a market for customized tissue paper to warrant having a partner in their business. She went out. Brad and Charlie both thanked her. Lori stated that printing had come a long way, and it was a really good-looking product. She said that she saw the keepsake part of it, but stated that people did not really like to spend a whole lot on the packaging since people just throw it away. She was out.

Kevin told the entrepreneurs behind Digiwrap that he thought it was a unique product, but he didn’t see a way to blow it up. Charlie told him that they’ve proved that the product is wanted and coveted. He said that every day someone else finds them, and someone spreads the word. Kevin decided to make them an offer, although it was a rough one. Mr. wonderful was known for taking advantage of entrepreneurs once all the other sharks were out. He offered them the $150,000 that they were asking for in exchange for a 50% equity in the business. That was a huge jump from their initial ask of 10%. Brad thanked him for his offer but said that the equity was a little steep.

Barbara told Kevin that he was downright greedy. Kevin denied that. He said that he wanted 50% of it. He told the entrepreneurs that that was the only deal, and if they didn’t want to he was okay. Charlie told him that they might be able to meet him in the middle since they were very eager to make a deal. Kevin wants to know what meeting him in the middle, and Brad came back with 20%. Kevin seems to consider it for a minute but then stated that it wasn’t really the middle. The Sharks all laughed, and Charlie said that was middle-ish.

Kevin laughed but quickly got back to business. He said that he was willing to come down to 40%. He said that it was a very generous offer and a huge discount. Charlie apologizes but said that they were unable to go up to 40%. When Kevin asked what they could go up to, Brad came back 25%. Kevin said no, and said that it was 35% or it’s not a deal at all. Charlie told him that he had to understand that they see it as a lot bigger than what it sounds like the sharks understood it to be. Brad cut in, saying that he knew that Kevin enjoyed royalty deals.

Kevin’s ears perked up, and he asked if he’d heard royalty. Charlie said that he did, and offered him equity plus royalty. Kevin wants to know how much equity he was looking at. Charlie said 15%, and they’ll give him a nickel for every piece of tissue paper, and $.40 for each bag that they sell. Kevin came back to say that he would give them the $150,000 that they were asking for in exchange for 20% equity and’s a nickel for every piece of tissue paper, and a dime for every bag in perpetuity. Originally, Charlie and Brad just wanted to offer him the royalties until his money was paid back. Robert pointed out that Kevin was literally nickel and dime-ing them.

Charlie stuttered a bit, saying that they couldn’t give him both equity and perpetuity. Kevin said that he would be willing to have the royalty go away at $450,000, and then he would still be their partner at 20%. Kevin said that he wasn’t worried about competition since no one else was going to go after the market. He told them to take it or leave it. It had been an impressive amount of negotiating so far. Charlie and Brad looked at each other and agreed. Let’s take a look at how they did after their stint on Shark Tank.

Digiwrap Now in 2018 – The After Shark Tank Update 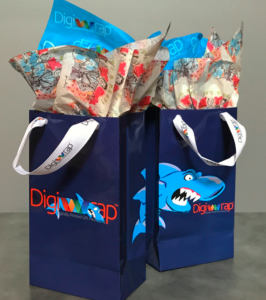 While it is pretty soon after Digiwrap did a deal with Kevin O’Leary which is still in negotiations, they still seem to be doing fairly well. In September 2017 they were invited to do a talk at Downers Grove North school for students in the Entrepreneurship Course. They shared their experience with running a business, and with appearing on Shark Tank. On their website, Digiwrap offers customized tissue paper with bridal themes, baby shower ideas, or even corporate branding logos. If you’re looking for a personalized way of wrapping your Christmas presents this year, click here to take a look at their website.