When Dale King came to his friend Renee Wallace and asked her to develop a first aid appointment with all-natural ingredients for the gym that he owns, she was all in. The goal was to meet the needs of that fitness community while also making something that would be used for the boots on the ground military. Doc Spartan was born.

Before their presentation on Shark Tank, the audience was treated to Doc Spartan’s audition tape.In it, they introduced themselves and told their backstory. Dale said that he was a military operations officer from 2003 to 2007. He served in two deployments to Iraq. He lived in Portsmouth Ohio all his life, and when he returned from the military it seemed like a totally different town. It had been ravaged by drug abuse and poverty.

He decided to open up a gym and help provide jobs to the local economy. Renée and Dale met when Renée became a member at his gym. She always had a passion for making all-natural products, and they decided to come together to start Doc Spartan. They ended the tape by saying that the American dream is alive in this one small town is everything. 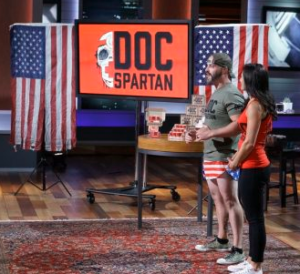 Dale King and Renée Wallace walked out into the Shark Tank and onto the stage. Dale began the presentation, saying that he loved short shorts, freedom, and the American dream. That was appropriate because Dale was wearing American flag short shorts. Renée said that while Dell saw himself as the beauty of the operation, she was definitely the brains. She requested $75,000 in exchange for 15% of Doc Spartan.

Dale said that life was like a contact sport, and war wounds were part of the game. He asked them to think of all the times that they or a loved one have encountered cuts scrapes rashes, burns, and even scars. He addressed Daymond as a fellow gym owner and said that his members were ripping their hands are busting their shins during the course of their intense workouts. Renée said that Lori should think of all of the curling iron burns that she suffered while prepping to go on QVC. Robert laughed.

Dale asked Kevin to think of all the paper cuts he got while counting his hundred dollar bills. He said that all of that changed now with the invention of the Doc Spartan ointment which was a completely natural, fast healing first-aid ointment which was trusted by the members of the special operations community. He asked the Sharks who was ready to join them on their mission to heal America’s wounds.

Dale said that he would love to give them some samples. Daymond asked why Dale’s shorts were so short, and Mark jokingly asked what was sticking out. Dale replied that it was “freedom” that was sticking out which got a laugh from all of the Sharks. He said that unfortunately, Barbara wasn’t there, but he was heeding her advice. She had suggested that if you want to get attention, you wear a short skirt with bright colors.

Robert asked what the appointment was, and how he would use it. Dale said that was more of what does it do. He said that’s a completely all-natural first-aid ointment. He said that everything that was in the packaging came from Portsmouth Ohio. Dale explained that when he went to serve some time in the military, he was an Army intelligence officer. He was fortunate enough to come back to his hometown after the deployment, but what he found was the most economically depressed and unhealthiest area in the state. He wanted to do something to make that better, so he opened a gym.

Dale found an abandoned warehouse and charged five dollars for a workout. That’s how he met Renée. Lori asked how Doc Spartan’s came to fruition. Renée explains that she was a mom of three, and she was married to of former Army pilot. She had begun researching the benefits of essential oils when she had a little girl. She started making her own skin care products, and Dale approached her to work on a healing ointment that they use when they rip their hands. Robert joked that it was because they weren’t using Natural Grip, which was a product that he sold. Dale said that he actually sold that line in his gym.

Robert wants to know about the applications of the product. Dale said that it would be used for any skin related element. Robert asked if he would put it on before a Band-Aid for cut and Dale said that it would accelerate healing that way. He showed some before and after photos on a television screen. The Sharks seemed impressed.

Robert asked what was in it. Renée explained that it contains coconut oil, beeswax, sweet almond oil, vitamin E, and essential oils. Robert asked as she put it all together just by trial and error, and Renée said that all of that was known medicinals. Robert wants to know where they saw the ideal position for the products if it got into a drugstore. Dale explains that they weren’t in any larger retailers yet, but it would be sold in the first-aid aisle. He said that since they weren’t selling in big-name retail, they sold 75% of the product online and then the rest was through independent gyms, as well as tattoo shops.

Robert wants to know what their cells were late today, and Renée explains that they’d done $56,000 in 11 months. The cost of goods was only $.95, and they sold to the ten for $9.99. They also sold larger tins for $14.99, and it cost them $1.70 to make. Mark said that he had been quiet because he had been freaked out because people make a lot of claims. He told them that no one had bothered them about it yet because they were still small, but they would have to be more careful if they are going to scale the business.

Dale said that they are going to be able to get those tests. Lori said that she was confused. She looked at the packaging and asked if combat ready meant combat healing. Renée said that it should say the first-aid ointment. Lori said that if you just took a quick look at it, it was scary looking. Dale said that they were in the Shark Tank to get advice and suggestions such as this. Mark let him know that they would’ve needed to already figure this out. That needed to be part of their research and preparation. He said that he didn’t think they’ve done the preparatory work that they needed to, and he went out.

Daymond said that Lori was really the expert in the Shark Tank in regards to testing and claims. Daymond announced that he didn’t know anything about that, so he would have to be out. Lori thanks them for their service, and said that they’ve done a good job in formulating an interesting product. To her, they had too long of a road ahead due to their competition. She thought that they had a good quality product, but she went out.

Kevin said that he liked the product and the eucalyptus smell, but it wasn’t an investable business for him yet. Dale lifted his hand to stop him, but Kevin went out. Robert said that he completely disagreed with the other Sharks. He liked the branding and thought that it would sell well at tattoo parlors and other places that ointment is sold. He thought that it could maybe be a new category, and Robert liked things that were new in a category.

Robert said that he wants to go along for the ride, and he offered them $75,000 in exchange for 25% of the business. Dale asked him if he could meet them at 20%, but Robert said no. Dale and Renée looked at each other for a minute, and then Dale asked Robert if the first beer would be on him. Robert grinned and said yes. Dale hugged Robert enthusiastically.  Let’s take a peek at how Dale and Renee do after doing a deal with Robert. 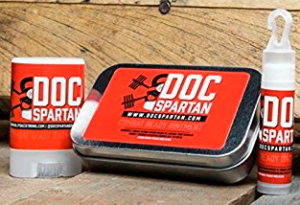 Since appearing on Shark Tank, Doc Spartan’s production has massively increased. After the show aired, the completed 4000 orders in a week were about $50,000-$75,000 in sales. They even had to hire a part-time or in order to handle the massive increase. Doc Spartan is also working on getting their products on to military bases, and going to trade shows specifically for military entrepreneurs.

In addition to selling the combat-ready ointment, Doc Spartan also sells other all-natural body care products for both men and women. Also, if you liked Dale’s signature short shorts on the show, you can purchase “ranger panties” on their store’s website. Take a look at the website by clicking here.