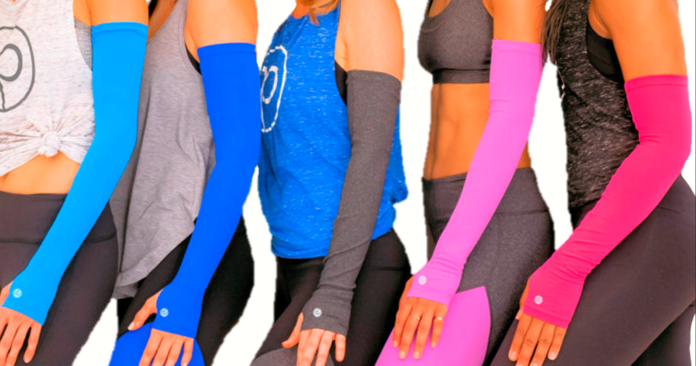 Lisa, the entrepreneur behind NicePipes Apparel, had been in the fitness industry for years before going into business for herself. She was a yoga teacher who was looking for a new way to keep warm in the winter on the way back to her house from her class. Lisa ends up designing her own arm and leg warmers out of the same material as yoga pants. She sold them on her website and out of her apartment until she made it onto Shark Tank. Let’s see if she was able to make a deal for her awesome business. 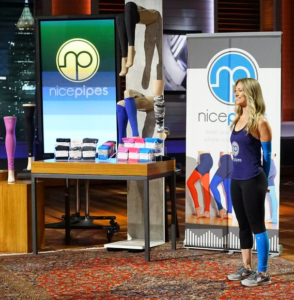 Lisa Binderow walked out onto the stage and into the Shark Tank. She was wearing a workout outfit – a tank top, knee-length leggings, as well as bright blue arm, warmers, and one leg warmer. Lisa introduced herself to the Sharks as the CEO and founder of NicePipes Apparel. She requested $100,000 in exchange for 10% equity stake in her company.

She claims that her clothes were the hottest new thing in the activewear market. First, Lisa wants to share her origin story with the sharks. She said that she was a yoga instructor who had been walking home from teaching her class one day, and she was freezing cold in her cropped pants. After that, she said that all she could find was sweater material like warmers. Sweater material like warmers are itchy, they don’t stay up, and they’re not that warm.

That weekend, Lisa decided to design her own like warmers and arm warmers using the same material that was in yoga pants. NicePipes apparel was designed with great colors, and different styles and they were naturally affordable. Lisa ended her presentation by asking the Sharks he was ready to show her their pipes. She went behind her display to get some samples to hand out.

As Lisa handed out her samples, the Sharks started on the questions. Mark asked if they were made in America, and Lisa told him that she made them in LA. Barbara wants to know what the leg warmers sold for, and Lisa told her that they were $42 for the pair. Robert questioned how much they cost to make, and Lisa informed him that she had gotten the cost of goods down from $10 to $7.50. Robert asked how she sold them, and she told him that she sells them both on her website and through retail. NicePipes Apparel was in 42 different stores – mostly yoga studios and gyms and other places like that.

As she spoke, Mark Cuban was gleefully trying on his arm warmers. He had them on all the way and was adjusting his suit sleeves over the warmers. Robert asked Lisa what her sales were. Lisa said that she had started 18 months ago in her apartment. She said that winter she’d done about $80,000 in sales.

Robert said that he loved everything about it, but was confused as to how it was supposedly worth $1 million according to her valuation. Mark told her that 10 times lifetime sales are a little much. Robert said that she seemed really reasonable and normal until he hears the evaluation. Lisa told them that she felt like there is a lot of potential with her business, and she knew that because he was also a customer. Lisa said that her target market was also her realm – she had been in the fitness industry for over eight years.

Lisa claims that every time she teaches a yoga class, she had people coming up to her wanting to buy her things. Kevin told her that he was about to say why it was not worth $1 million. Kevin told her that while it was a very creative product, it was not proprietary whatsoever. He thought that anyone would be able to knock her off very quickly. He said that the number of stores that she was in was tiny compared to the number of stores that it could be in. He thought it was sort of like a hobby. Barbara said that that was very insulting, and Lisa should tell him to take a walk.

Kevin started to say that if she walked downstairs, and got run over by a truck, her business would be worth that much. Lisa left incredulously and asked if those were her options. Mark Cuban said that that was how Kevin negotiated. Kevin said that he worried that there was no infrastructure. Lisa told him that the way he was thinking was wrong If someone had told the entrepreneur behind Spanx make them because Hanes was going to beat her up, then control top pantyhose would be in a worse position. Kevin said that he agreed, and he knows the woman who did it.

Lisa said that she was NicePipes, and Sarah was Spanx. Kevin tried to say that she currently has thousands of employees, but Lisa spoke to him, saying that everyone starts somewhere. Barbara told her that that was a good point.

Lori wants to know how much money she’d invested into the business. Lisa told her that she had put in $300,000. All the Sharks began exclaiming, wondering how she had spent so much money and where it had gone. Lisa explained that she was currently sitting on $65,000 worth of inventory. Mark wants to know what her core competency was. Lisa said that she was a valuable executive who understands people. Mark said that was too generic, but Barbara and Lori defended her. Lisa said that she thought that what she had managed was exceptional with absolutely no background in business.

Lisa asked Mark if he felt like companies don’t need CEOs. Robert cut in, stating that she was not a CEO. The entire company was her. Mark said that she was an entrepreneur, which was great, but she wasn’t a CEO. Robert said that when she stood on the carpet and tried to tell him that her business was worth $1 million, she had to have something to back that up. If she did, that all of the niceties and the other stuff goes out the window. Mark said that the fact that she had to spend $300,000 in order to get it off the ground was bad. It showed that she didn’t know what she was confident in.

Lisa said that she felt like that was not the case. She said that she had determination, which is more valuable than saying “Oh, I’m really good at design.” Mark wants to know if $300,000 was her entire life savings, and Lisa said that she was just going to say that she wasn’t planning on buying a house anytime soon. Kevin said that at the end of the day it was a business that had done $80,000 in sales, and there is no scenario that he could work out where it was worth $1 million. He went out.

Robert was up next, saying that he didn’t want to rain on anyone’s parade. Unfortunately, he felt like she lost all credibility when she said that NicePipes Apparel was worth $1 million. He told Lisa that it didn’t make him trust her since it was too incomprehensible. Lisa said that she hated hearing that he didn’t trust her over it. Robert said that he couldn’t get why she had made a valid decision to make it worth $1 million. He couldn’t get there, and couldn’t take it seriously. He decides to go out.

Mark Cuban told her to take the inventory that she already had, and get out there to sell it. He told her that she should be able to kill it with this product if she took all the spare moments that she had where she wasn’t designing something else. He said that she should be fine as long as she focused on sales. Marcus declared that it wasn’t a good fit for him, and he went out.

Lori was up next, saying that it was hard to decide exactly what a person was going to be great at when they first start a business. Lisa nodded in agreement. Lori said that she went through the same thing with no help and no mentor. Lori said that she liked the product, but she sees it as a nice business for Lisa. She went out.

Barbara was the last Shark left. She asked Lisa why she thought that NicePipes Apparel was a one-million-dollar business. Lisa said that she was just going to be brutally honest, and lay it out there. She did not know how to value a business. Barbara asked her if she came in to negotiate, and Lisa said absolutely. She said that she didn’t want to come in, ask for a lower number, and have no room to go from there.

Barbara said that there is also a huge contingency. Her company Grace and Lace would have to partner with her on the deal. She explained that Grace and Lace was a great leggings company. The company did $20 million a year without spending a dime on advertising. They do all their sales through social media. Barbara said that Lisa would be getting a partner and that she really needed. She also said that she wanted to have them in on the deal before Lisa would get the money.

Lisa considered the offer in front of her. She said that she wanted to counter for $100,000 in exchange for 25%. Barbara told her that was not doable. Lisa took a deep breath and said that she appreciated the offer, but she couldn’t give away 40% of her business. She said that maybe she wasn’t doing it the right way in the first 18 months, but she’d faith in herself that she would figure it out. Barbara told her not to second-guess herself, but Kevin asked her if she was sure. Lisa said that she believed in herself, and she was not going to take the deal this time. Barbara smiled and told her to go out and prove her wrong. Lisa thanked her and walked off stage. Let’s see how she does without Barbara’s help. 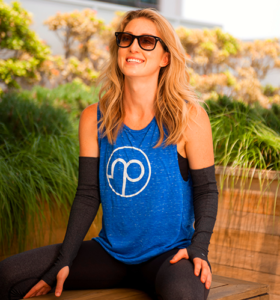 After her stint in the Shark Tank, Lisa did an interview with Entreprenuer.com. She explained that she learned something about herself in the Shark Tank – she was braver than she thought, and the millionaire life might not be for her. She was happy with the way she was able to run her business and still teach her yoga class. If her well-done social media posts are anything to go by, the NicePipes Apparel business is still going extremely well. Click here to take a look at her website.