Elena, the entrepreneur behind Mama’s Milk Box, knew what it was like to breastfeed two children and not feel good about what she was wearing. She wanted to make clothing that was stylish for nursing moms. She decided to go with the subscription box model and was able to get it to a thriving $83,000 as a side business. She is eventually able to make it her full-time job and got it on the shark tank. Let’s see if the Sharks would take a bite out of this breastfeeding clothing subscription service. 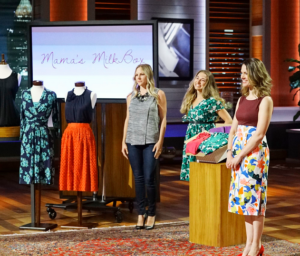 Elena Petzold walked out into the Shark Tank and onto the stage. She faced the Sharks and introduced herself as from being from Pittsburgh Pennsylvania. She said that she was the creator of Mama’s Milk Box, and she was seeking $200,000 in exchange for 20% of her company. She gestured to the two women that she had brought with her on stage. Both of the women were dressed fashionably. Elena asked the Sharks if they looked good, and when the Sharks nodded she said that they were also able to nurse their babies in those clothes.

Barbara looked understandably surprised as Elena handed one of the women a fake baby, and she pulled away a piece of the shirt to mimic the baby breastfeeding. She explains that mama’s milk box was a nursing apparel subscription service that delivered breastfeeding clothing to a mother’s door. Elena said that each box was $29. There subscribers completed a style profile, and that there breastfeeding stylist hand/nursing tops and dresses to match that style. A curated shipment was then sent to the consumer’s house, where they have three days to try on the clothes in the comfort of their homes. They were able to try on the clothes, and send whatever they didn’t want back to the warehouse within three days.

The $29 filing fee was applied as a credit to anything that the woman bought. The next shipment was automatically scheduled for delivery in six weeks. She said that in the breastfeeding world, breastmilk was called liquid gold. She asked who want to get in on the liquid gold rush with her.

Robert seemed amused at the phrase the breastfeeding world. Alayna said that she was the queen of breastfeeding fashion. Elena said that what she did for their sample boxes was try to envision their style profile. She said that Barbara usually wears bright colors, so there are a couple bright pieces in her box. She told Lori that she knew that she loved a play on structure, so she tried to include that element in her shipment. Mark Cuban pulled out of purple top, and said that he would look good in it. Elena told him to try it on since she doesn’t judge.

Robert attempted to clarify her business model. He said that he heard her say that she charges $29 a month for the curattion fee. Elena affirmed that that was the case. Robert asked if he wanted to purchase one of the items, then he would have to buy it. Elena explains that he would just keep it and then send back whatever in the box he didn’t want. Robert asked how he would pay for the shirt that he did want. Alayna told them that they would just automatically bill him. She said that they provide a 10% discount to customers that purchase everything in the box. Robert asked if she was simply a fashion stylist to curates other people’s brands. Elena said that they had their own private label.

Kevin asked her if it was just her picking out the clothing, packing the boxes, and shipping them out. Alayna said that she hired someone in March, and then another person two weeks ago to also assist. Kevin tried to pin down what was happening with the inventory, but Alayna kept interrupting him as he was talking. She tried saying that her model was more amazing than the traditional retail model, but the other sharks told her to be quiet and let Kevin finish his question. He said that as more and more people come onto the platform, now every week or every cycle there sending a box out, and she would have to buy the inventory. That would tie up capital.

Elena said that she had already negotiate a bunch of net terms, and she was crazy at driving down the wholesale prices. Mark told her that she had an answer for everything. Elena said that she wasn’t afraid, and told Mr. Wonderful to bring it. Kevin said that she was about to hit a brick wall and go out of business. He said it was a calculation called return on assets. He said it was a really important part of her model, and she need to quicken the cycle from one she had to buy the inventory to curate the fashion to ship it to somebody. Elena told him that the mothers could elect to get it sooner, but the way she did it was actually how she’s been able to get to the level. Kevin could hardly get a word out. It was weird that she was so defensive.

Barbara asked her to slow down on her answers. She felt like every time they ask Elena question, they can even get the words out. She told her that that technique was going to work against her. Barbara said that it was important to have enthusiasm, but Elena really need to take a breath. Barbara asked her what her sales looks like. Elena said that she had made $83,000 in sales as a side business. She said that this year they had already surpassed the sales, and by the time they closed out the month they would be at $100,000.

Mark Cuban asked her where she got the $120,000 to support that inventory. Elena said that she started the business with $11,000, and has never taken a salary. She just kept rolling over any profit that she got in order to buy more clothes. Elena also said that she did the line of credit for $40,000. Kevin asked her if that was debt now, and she said yes. She said that she also had $27,000 of credit card debt into the business. Robert asked her what the cost of goods was to get the hundred thousand dollars worth of revenue.

Elena made a face, and told him that she couldn’t tell him that. Mark asked her how she kept track of everything, and she told him that she uses Excel and paper. She said that was why she was in the shark tank to begin with, and it should be impressive that she was able to make $100,000 using Excel and paper. Robert learned know that she didn’t actually make $100,000. There is a difference between revenue and profit. Mark told her that it should’ve occurred to her to say that she need a bookkeeper or an accountant to make sure that she knew what was going on.

Elena tried to say that she had an accountant but he was her husband and wasn’t dedicated to the business. Mark let her know that that was the same thing is not getting it done. He was out. She clapped her hands together and said oh no. She has the sharks to reel it back in. She told him that she was here for deal, and she knew the business was going to make money. She repeated that she was the queen of breastfeeding fashion. She tried to say that there was no other business in the United States that was making clothing like this.

Kevin told her that there is a mistake in her presentation.Elena said that she wasn’t fancy so she didn’t know the numbers that she was supposed to know faster off the top of her head. She blew it off, stating that she could learn that too. She said that she doesn’t understand something, she will go in and learn it. Barbara talked over her and said that it was hard to see if she actually had a good business. Barbara stated that she was going out because of the confusion.

Elena said that Kevin kept looking at numbers, but what he wasn’t seeing was that she knew everything that there was to know about breastfeeding clothing. Kevin told her to stop selling. He said that he didn’t want to buy them. He told her that she couldn’t own the business, and on the clothing, and own it all while it moves around the country. Elena said that he was giving up on women, and Kevin said that it had nothing to do with that. He told her that he loved what she was doing with the breastfeeding clothing, but the subscription model was broken. He went out. She thanked him for his feedback.

Robert asked her why Mama’s Milk Box was such a passion for her. Elena said that she was a mom, and she breastfed two kids. She knew what it was like to not feel good. Robert told her that no one was doubting her enthusiasm because it was off the charts. He said that the business that she pitched was not adding up to her numbers. Robert went out.

Elena pleaded with Lori to give her a lifeline. She told her that if she wasn’t in now, she wanted to get her to a yes. Elena said that she was disappointed in herself for her presentation. Lori said that passion was only a fraction of running a business. She thought that the subscription model was going to be really challenging, and it wasn’t going to work for her. Lori said that she need a lot of help, and she wasn’t able to give it. She went out. Let’s see if Elena was able to keep it together without a deal, especially after giving such an erratic presentation.

About a year after filming for Shark Tank, Mama’s Milk Box subscription service came to an end. Elena made the announcement on Facebook as of November 28, 2017. She said that she would continue to sell directly to the consumer, but not with the subscription box model. Elena started a blog and began selling her close at the breastfeeding style studio, or BFSStudio.com. The new company’s business seems to be off to a slow start as their Facebook page only has eight followers. It seems like they didn’t get to where they wanted to be, but Elena is still trying to make a revolution as the breastfeeding clothing Queen.