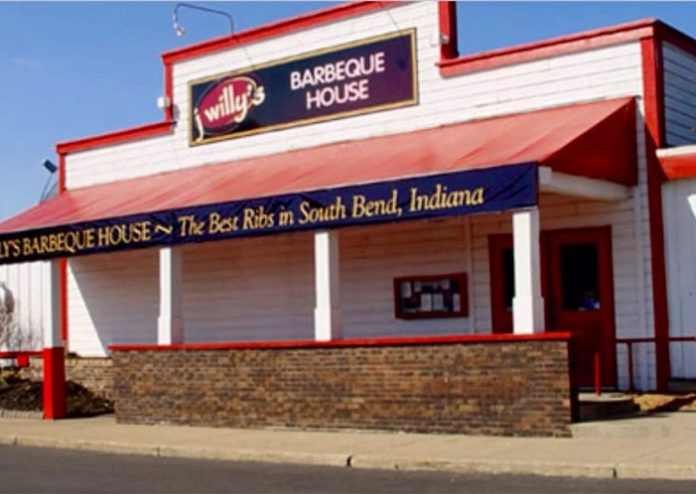 J Willy’s of South Bend, Indiana was a thriving business when it was bought by husband and wife Rick and Tricia, along with their business partner John, but in the following three years it’s popularity had declined sharply.

Rick and Tricia lived three hours drive away and also ran another restaurant in their hometown, which left John in charge of the day-to-day running of J Willy’s. Rick and Tricia were less than satisfied with how their partner was managing things. Rick blamed John for running the restaurant into the ground and Tricia believed he was too indecisive and unable to turn things around. Steve the cook revealed that food standards had dropped and complaints from customers were all too common.

John admitted that he had lost his passion for the business, he was frustrated at not getting much support from Rick and Tricia and believed that only a miracle from Gordon Ramsay and the Kitchen Nightmares crew could keep J Willy’s afloat.

Gordon’s first impression of J Willy’s isn’t particularly positive, he remarks that the ‘Ghastly’ flashing sign reeks of desperation and ghastly turned out to be Gordon’s favorite adjective for his first visit there. After meeting all three owners Gordon peruses the menu, which has a huge selection, all accompanied by ‘ghastly’ pictures, and he eventually chooses his meal, beginning with the loaded baked potato pizza.

While waiting for his food Gordon observes that the whole restaurant is ‘sad and grim’, and he criticizes the carpet, which he thinks looks as if a ‘Thousand buffalo’s had walked across it’. His less than enthusiastic observations of the décor are interrupted by the arrival of his pizza, but Gordon is so underwhelmed by the sight of it that he gets a priest at a neighboring table to bless his food before he tastes it, and having taken all possible spiritual protections he gets to grips with it.

Unfortunately, Gordon finds the pizza greasy, not particularly tasty and with a ranch dressing ‘Like wallpaper paste’. Having seen the pizza not meet with Gordon’s approval John ensures that his next selection, the ribs are cooked to perfection, and although Gordon doesn’t comment on the cooking, he does find fault with their quality, remarking that they are greasy, filled with fat and not even trimmed.

The final chance to impress Gordon comes with the pulled pork sandwich, one of J Willy’s most popular dishes and one that John is particularly proud of. Unfortunately but not particularly surprisingly Gordon is not quite so fond of the dish, which he describes as tasting of nothing, once again ‘ghastly’ and full of gluey processed cheese. Gordon finds this final course so objectionable that he liberates the priest at the next table of his own pulled pork sandwich, remarking that he’ll be rewarded in Heaven for such a charitable act.

After his meal Gordon sits down with the owners and discusses the problems with the restaurant, Rick reveals that the business is $1.2 million in debt and he and Tricia are barely able to cope with the stress, Tricia tells Gordon that part of the problem is that John has lost his passion to make J Willy’s a success, while John blames the lack of money for his inability to improve things.

The following day Gordon spends a lunchtime in the kitchen, during which countless meals are returned and complaints from diners received. Gordon thinks that John is ‘clueless’ and is cutting corners in all the wrong places. After lunch, Gordon sits down with the owners and all the staff where once again Rick places the blame for all the problems at John’s feet, but the staff sticks up for John, accusing Rick of never being at J Willy’s and leaving John to cope with everything on his own. Gordon eventually tells everyone that the biggest problem at the restaurant is the standard of the food, and that’s where he’ll start the recovery of the business.

After a day spent cleaning the kitchen up to Gordon’s standards, he teaches the staff a brand new specialty burger dish with a J Willy’s signature barbecue sauce all made from fresh ingredients. That evening the new burger dish is a big success and they are flying out of the kitchen, but then the pressure on head chef Chris begins to show. Not used to having such a busy shift Chris begins to rush the food out, and the complaints begin to come in, undercooked and overcooked burgers have been served and Chris is overwhelmed.

John finally makes a decision as the new J Willy’s house burger gets sold out, and the team resorts to the old style burger which is far cheaper and of much lower quality. The long waiting times combined with the disappointing food actually results in one lady in the restaurant bursting into tears, and after such a great start Gordon declares that J Willy’s is back to square one.

Gordon insists that everyone states that they are committed to making J Willy’s a success again and that night the Kitchen Nightmares team perform one of their trademark overnight makeovers. Gone is the ‘ghastly’ flashing sign and even more importantly that threadbare old carpet has been replaced by a far brighter version that is coordinated with the restaurants altogether more pleasing color scheme. The staff seems overwhelmed by the classy new look of J Willy’s and one server is even moved to tears by the high-quality tablecloths and everyone is far more upbeat.

Gordon wants J Willy’s to be famous for its signature barbecue sauce and he’s streamlined the menu too, it had 75 dishes when he arrived but now he’s cut the selection in half, and the new menu is quick to make and filled with freshly made dishes containing none of that gluey processed cheese. The relaunch night that night is busy but Gordon encourages John to put more effort into managing things, and apart from the odd hiccup here and there the evening is a big success.

Overall Gordon is pleased that everyone at J Willy’s is far more positive about the future and above all that the customers seem far more impressed that they had been before his visit, but despite his belief that J Willy’s would be able to once again become a successful and popular restaurant, it wasn’t very long before the serious financial problems the owners were in, combined with the economic slump of 2008, became the final nail in the coffin for J Willy’s.

J Willy’s Now in 2018 – The After Kitchen Nightmares Update

The J Willy’s episode of Kitchen Nightmares was first aired in October 2008, and at first, the added publicity combined with the new positive attitude at the restaurant brought big rewards for the business. J Willy’s won a competition with their brand new signature barbecue sauce, but mixed reviews on Yelp showed that although sometimes the food was highly commended, there were still lingering problems with the quality of the service overall.

With the economic slump of 2008 the three owners sought an investor to help them out of the immense debt they owed, but unfortunately, they couldn’t attract another potential partner in time, and in February 2009 they finally closed the doors of J Willy’s for good.

Rick and Tricia eventually left the restaurant business for good when they sold their other restaurant, Damon’s Grill, and these days Rick has a business restoring and selling classic cars.