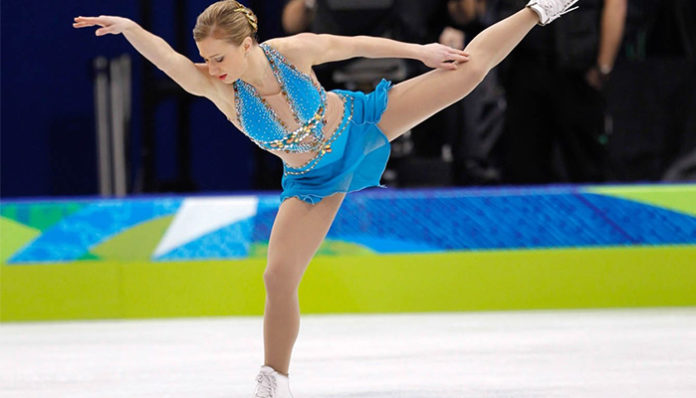 A Canadian figure skater, Joannie Rochette is perhaps best known for having won the bronze medal at the 2010 Winter Olympics. An emotional tale, her performance had been preceded by her mother’s unexpected death, just two days prior to her short program. Choosing to skate in her honor, she eventually went on to finish third on the podium.

Prior to that, she had medalled at several other events including the Four Continents Championships, Canadian Nationals, and Grand Prix Finals. With her skating career behind her, she is currently studying medicine at the McGill University Faculty of Medicine. Last August, she was inducted into the Skate Canada Hall of Fame.

How rewarding had her figure skating career been? How successful is she doing for herself now financially? Unfortunately, information on Joannie Rochette’s net worth is currently unavailable. While we get working on that though, why not take this opportunity to go over some of the greatest highlights of her career?

How did Joannie Rochette Make Her Money & Wealth?

Born on January 13, 1986, in Montreal, Quebec, Joannie Rochette was raised in the municipality of Ile Dupas. Like most figure skaters, she started skating at a young age- when she was only two years old. With diligent practice and hard work, she quickly moved up the ranks over the next several years. By the time she was thirteen, she had made it to the novice level.

The following season, she made her junior debut at the ISU Junior Grand Prix series. After finishing fifth overall, she qualified for the 2001 Canadian Championships, where she won her first junior national title. Shortly afterward, she competed in the 2001 World Junior Championships- though she ultimately finished off the podium.

Over the next few years, Rochette medalled at several events including the 2003 Skate Canada, Cup of Russia, and Cup of Ice. In 2004, the skater also won a silver medal at the 2004 Canadian Championships.

During the subsequent 2004-5 season, she received her first senior national title at the 2005 Canadian Championships. With that, she became the first female skater to have ever won the championships at all three levels- novice, junior and senior. From there, she finished eleventh overall at the 2005 World Championships, which earned her a ticket to the 2006 Winter Olympics.

Despite an impressive skate, however, Rochette placed 5th at the Winter Games. Ultimately, it wouldn’t be until her second Olympics in 2010, that she’d finish on the podium. Nominated to represent Canada that year at the Winter Games, she was practicing for the SP when she was hit with the tragic news- her mother had passed away from a heart attack shortly after arriving in Vancouver to see her compete.

Despite the tragic news, however, she chose to continue skating in her mother’s honor. In the end, she skated a new personal best; following a third-place finish in the LP a couple of days later, she successfully won the bronze medal.

Now retired from the sport, she is currently studying medicine at the McGill University Faculty of Medicine.

As far as we know, Joannie Rochette is currently single.

In the past, she had briefly dated Francois-Louis Tremblay.

Does Joannie Rochette Have Any Children?

Did Joannie Rochette Go to College?

The last that we’d heard, she was studying medicine at McGill University.

What is Joannie Rochette Famous For?

As a figure skater, Joannie Rochette is perhaps best known for having won the bronze medal for Canada at the 2010 Winter Olympics (despite her mother’s tragic passing just a few days prior).

Joanie Rochette currently resides in Montreal, Quebec. Photos of her home are not available at this time.

What Kind of Vehicle Does Joannie Rochette Drive?

Information on Joannie Rochette’s vehicle is unavailable at this time.

How Much Money Did Joannie Rochette Make Last Year?

Last summer, it was announced that the former skater had been inducted into the Skate Canada Hall of Fame. Unfortunately for us fans, she has not made any appearances in the media as of late.

Want to support the former Olympic medalist? If so, why not follow Joannie Rochette on social media? You can find her on Twitter at @JoannieRochette or on Instagram at @JoannieRochette. On Facebook, she also has an official fan page which you can visit here.