Twenty One Pilots Net Worth 2018 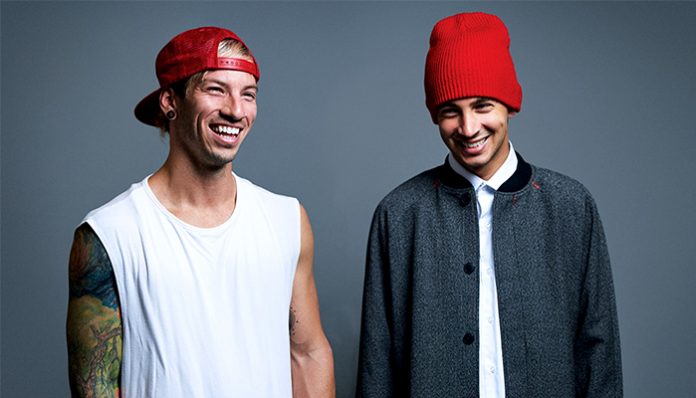 A musical duo, the twenty one pilots rose to fame in the mid-2010’s after churning out many independent releases. After signing to Fueled by Ramen, they dropped their major label debut, Vessel in 2013. A commercial success, it has since gone platinum in the United States with over one million sales.

Today, their most popular singles include Stressed Out, Ride, Heathens, and Tear in My Heart. The pair has also embarked on a number of concert tours- in fact, they had just recently finished up with their 2017 Tour De Columbus event.

With the fan base that they have, and the number of records that they’ve sold, how much have they pulled in over the years? How much has the pair accumulated throughout their career so far? As of 2018, the twenty one pilots have an estimated net worth of $10 million.

How did Twenty One Pilots Make Their Money & Wealth?

Formed in 2009, the group was formed by Tyler Joseph, the lead vocalist along with former members Chris Salih and Nick Thomas. After playing at various clubs and venues, they began to experiment with on-stage acrobatics and costumes. As one thing led to another, they eventually released their self-titled debut album, Twenty One Pilots on December 29, 2009. A mild success, it had peaked at number 139 on the Billboard Top 200. In support of the project, the group had also toured across Ohio.

From there, they released a second project titled, Regional at Best prior to achieving commercial success with their major label debut, Vessel in 2013. Their first album with Fueled by Ramen, it gave rise to several new songs including Fake You Out, Guns for Hands, and Holding on to You, all of which were later released as singles. Not only did it peak at number 21 on the Billboard 200, but it has also gone platinum in the US.

Since then, their popularity has only increased further with the release of their fourth album, Blurryface. A chart-topper in the U.S., it went on to spawn the multi-platinum hits Stressed Out, and Ride, two of their most successful singles to date. As for the album itself, it has gone platinum three times in the country.

Considering the number of albums that they’ve sold over the years, it’s obvious that they’ve contributed significantly to their financial success. On top of what they earn from record sales, however, they also headline tours on a regular basis; naturally, they would pull in a decent amount of earnings from each performance. For instance just last year, they traveled for their Tour De Columbus Tour. Prior, they performed across the world for their Emotional Roadshow World Tour.

If you’d like to support the twenty one pilots, they have set up an official merchandise store which you can visit here. From the looks of it, a variety of products are available from t-shirts to flags.

Are the Members of Twenty One Pilots Married?

Tyler Joseph: He has been married to Jenna Elizabeth Black since 2015.

Josh Dun: From what we can tell, he is currently not in a relationship.

Do the Members of Twenty One Pilots Have Any Children?

As far as we know, neither of them have any children.

Did the members of Twenty One Pilots Go to College?

No, neither of them have gone to university. In fact, Tyler had given up the opportunity to play basketball for Otterbein University, having instead chosen to pursue a music career.

What are the Twenty One Pilots Famous For?

The Twenty One Pilots rose to fame with the release of their major label debut, Vessel in 2013. From there, their popularity exploded with their fourth album, Blurryface.

Where Do the Members Live? Pictures of Their House

The group is based in Columbus, Ohio. Unfortunately, further details on the members’ locations are not available.

How Much Money Did the Twenty One Pilots Make Last Year?

Unfortunately, we do not have any information on the Twenty One Pilots’ annual salary.

Though they haven’t released any new albums in a while, the music duo has remained active with two concert tours over the past two years. Most recently, they headlined the Tour De Columbus in 2017.

Want to keep up with the latest news and announcements? If so, be sure to follow the 21 Pilots on social media. You can check out their official Twitter account at @twentyonepilots. For their official music videos and more, be sure to subscribe to their YouTube channel here.