In 2011, Wendy Colson founded Boobie Bar as a way of helping her patients. Wendy worked as a neonatal nurse and lactation consultant. The new mothers in her care were desperate to find a new hack that would help them produce more milk. As is typical of new entrepreneurs, Wendy began to experiment in her kitchen, baking nutrition bars that contain ingredients thought to increase lactation. Her first customers were her patients that she used as taste testers. Eventually, Wendy and her bars ended up in Walmart, on the Dr. Oz Show, and of course, Shark Tank. 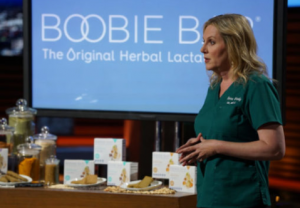 Wendy walked out into the Shark Tank wearing green scrubs. She faced the Sharks and introduced herself and her company, Boobie Bar. As she said that the name of the company, Daymond paused his writing and smiled at her. Wendy continued, saying that she was seeking $150,000 in exchange for 10% of her company.

Wendy started off her presentation with a joke. She told the Sharks that her company was the hottest bat in Las Vegas. As she admitted that it was a joke, Mark Cuban told her that he was already out. The other Sharks laughed uncomfortably. Wendy apologized for disappointing them she then explained that Boobie Bar was a lactation bar designed to give lactation increasing nutrients to new moms who are breastfeeding. She claimed it was the most convenient and portable way to support a milk supply.

Wendy told the Sharks that she was a lactation consultant who got to see the beautiful relationship between a baby and their mom when she was breastfeeding. She admitted that it could also be a stressful time when new moms were worried about the milk supply. Other alternatives out there to her product were lactation herbs in order to increase the milk production. Those herbs were not ingested easily. Wendy said that the new mom could be stuck brewing 6 cups of tea or taking 15 pills a day in order for the supplements to be effective.

Since most new moms don’t have time to prove 6 cups of tea in one day, Wendy decided to make a new product. She said that she combined organic lactation herbs into a proprietary blend into nutrition bar. She requested that the sharks help her bring the bars to the people that need it – time-crunched new moms. Wendy finished the presentation by asking the sharks to help make Boobie a household name.

As the Sharks laughed at her joke, Wendy told them that she brought samples. Sarah, the executive behind SPANX and the guest Shark for the show, asked her what would happen if men eat it Wendy took a moment to reflect on said that she would be thrilled if her bars could get men to lactate. She brought three different flavors with her. Kevin looked at the packaging and asked what her best-selling flavor was. Wendy told him that it was the oatmeal chocolate chip.

Daymond said that he likes the bar, and if he “had knockers” he would eat them every day. Mark went the serious route and asked how many other lactation bars there were on the market Wendy explained that there are no other commercial lactation bars in the market. You could find recipes online for them but no one sold them on a widescale basis. She said that she wanted to give a more convenient way for a breastfeeding mother to take her herbs.

Mark looked apprehensive, and he said that he had to ask. He wanted to know if she had any proof that they actually worked other than anecdotal evidence. Wendy said that there was for sure anecdotal evidence. Kevin cut in, asking if the story was that women used these herbs and spices for thousands of years in order to support lactation. Wendy agreed that that was the case. Lori wanted to know if there’d been any clinical trials done. Wendy said that she didn’t do clinical trials but rather her own independent study she gave a group of mothers that she didn’t know and asked them to eat one bar a day. Their progress was monitored, and the women ended up producing 4.6 ounces as opposed to 1.5 ounces per day she said it might not sound like much but it was a whole extra meal for the baby.

Wendy explained that she’d use the product since 2011 with her patients at the hospital. She explained that she is a registered nurse and a board-certified lactation consultant. Wendy told the Sharks that there is no higher education or certification for breastfeeding than what she had. Sarah cut in, stating that she wasn’t sure but she might be one of the only Sharks on the panel to the breastfed. Lori said that Mark did too. Kevin interjected and said that it might’ve been a few years ago, that he was also involved in the process. Daymond just buried his head in his hands.

Sarah continued, saying that most of the employees at her company were women and they had lactation rooms. She said that she is interesting. Mark said that anyone could he claims that mislead people about the products that they had. Wendy said that she wasn’t making a claim, but Mark refuted that statement. Mark continued, stating that nursing mothers who tried these bars were expecting the Wendy had no way to prove that they would be getting the notes that they wanted.

Sarah cut in, stating that there are a bunch of energy bars on the market and the combination of herbs ingredients are what is proven to give the energy. Before she could finish, Mark cut her off and asked if she was serious. Kevin wanted to know what her customers said. Wendy struggled to take control of the room again. She said that she had heard all of the Sharks concerns.

Kevin told her that that was a lot of potential customers. He wanted to know how Wendy was getting to the mall. Wendy explained that she was in 500 different stories. She just secured Walmart, and she was also in Babies R Us and Bye-Bye Baby. Kevin asked how many stories that Walmart was putting it into. Wendy revealed that there are trying it with 200 because it goes in the specific section. She knew that they were due to sell in January. Walmart had also made a whole aisle around this product.

Mark said that he saw the need for lactation experts, that was Lori of the product because she didn’t have any scientific studies. He thought making money off of desperate moms with a confirmable proof was immoral. He went out, stating that he saw her business is another curse of the supplement industry. Wendy looked a little shellshocked as she thanked him.

Only Kevin and Daymond were left. Wendy didn’t waste time on the other three, she just told the two that were left that she had a subscription box service for Boobie Bar. She said that she’s had women on club booby bar for over a year. She knows that there is no clinical proof but she didn’t think that the women in her subscription box service would continue purchasing the cars if they didn’t work. Kevin interjected, stating that his Wine and Design business was subscription box based. He had a massive fulfillment facility already in place. He said that he loved the business.

Kevin offered her $150,000 in exchange for 20% equity stake in her company. He told her that she had no idea will Walmart was going to be like. He told her that the hearing the Walmart deal was an amazing opportunity and achievement and congratulated her on getting it. He finished by saying that it was time for some serious work and serious full-time employees. Mark cut him that she should also prepare for legal work as well.

Wendy smiled and asked the other Sharks if anyone had another deal. Daymond spoke up and said that he didn’t agree with his other Sharks on whether or not it was legitimate. He said that you could look at the results from her current customers and see that it was working or not. Mark shook his head. Daymond continued, stating that he saw Wendy’s value to the company in her title and her informational offerings. He told her he didn’t want her stuck in manufacturing and said that the best way forward was to license it. He wanted to make her the face of the company and have other people do the work.

Daymond offered her the same deal that Kevin did in terms of equity – $150,000 in exchange for 20% equity. Wendy thanked him for his offers well. Wendy said that they were both amazing offers and she had a difficult choice ahead of her. Kevin said that she would have to make a decision. Daymond asked her if she was going to go with someone who was in the trenches with what the mothers were dealing with, since he had a kid, or if she wanted Kevin who was going through the male equivalent of menopause.

Wendy said that Daymond has a fantastic point. He did know what new moms were going through since he had a young son at home. She accepted his offer. She jumped up and down on the stage before he came up and hugged her. As Wendy walked off the stage, Lori rolled her eyes at Daymond and said that of course, he loves the business because he was now in the Boob business. He did not disagree.

Boobie Bar Now in 2016 – The After Shark Tank Update 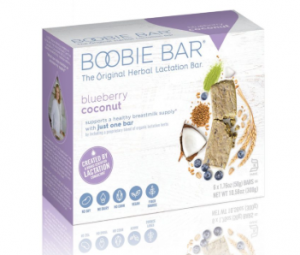 Soon after the episode aired on ABC, Boobie Bars were the featured lactation bar in the Mombie box, which doubled up on exposure for the company. It looks like they survived the Walmart test because the boxes are currently being sold on the Walmart website for $17.99 per six bars. They also launched a new product called Boobie Body, which is a plant-based protein shake in Chocolate Bliss flavor. Most importantly, Wendy posted on the company Instagram that she was meeting with people at Target to see about stocking the Boobie Bars there. There’ve been no updates on that so far.