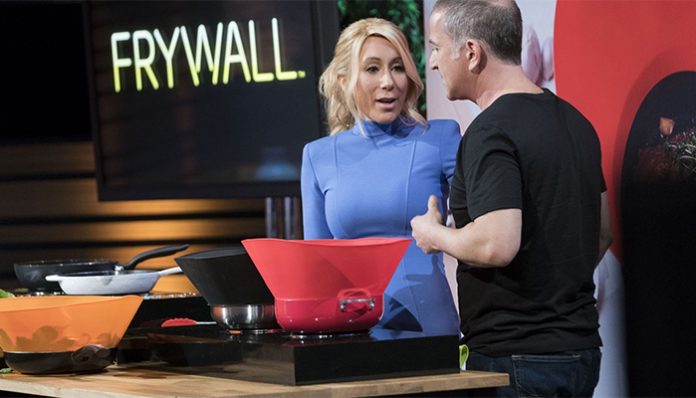 Since the cooking gadget was featured on Shark Tank, more than six months have passed. How are Reiner and the company doing nowadays?

Invented by Yair Reiner—the founder of Gowanus Kitchen Lab, the Frywall provides home cooks with a splatter-free way of sautéing and frying in the kitchen. A fan of cooking, but not a fan of the subsequent cleanup, Reiner had decided to create the Frywall after cooking a particularly splattersome duck breast one day. After experimenting with a few designs, he purchased a two-part silicone paste over the Internet, with which he used to create his prototype—a large cone that sits inside the rim of a saucepan.

At the time, Reiner had just lost his job. Focusing his attention on the Frywall, he managed to come up with a prototype within three months. From there, it wasn’t long before he started to sell it on the market. Fast forward a couple of years, and the product has been picked up several retailers across the country. Despite its success, however, the creator was well aware that pursuing the business full-time had its risks.

With a bit of luck, however, the Frywall went on to receive a considerable amount of attention after winning NBC’s Next Big Thing competition in April 2017. As the winner, the product not only landed a spot on QVC but was also featured in several publications such as the Los Angeles Times.

From there, it was announced that Reiner would be pitching the product on ABC’s Shark Tank. The episode eventually aired on January 7, 2018.

Donning a Frywall t-shirt, Reiner walks into the show to introduce himself to the sharks. Getting right to the point, he tells them that he is seeking $100,000 in exchange for 10% of his company.

Next, he introduces his product—the Frywall. Walking towards the impromptu kitchen on the set, he explains that the gadget provides a solution to a problem well known to home cooks—splatter. Giving the sharks a visual demonstration, he gestures towards a particular pan on the stove, one that is surrounded by splatter. 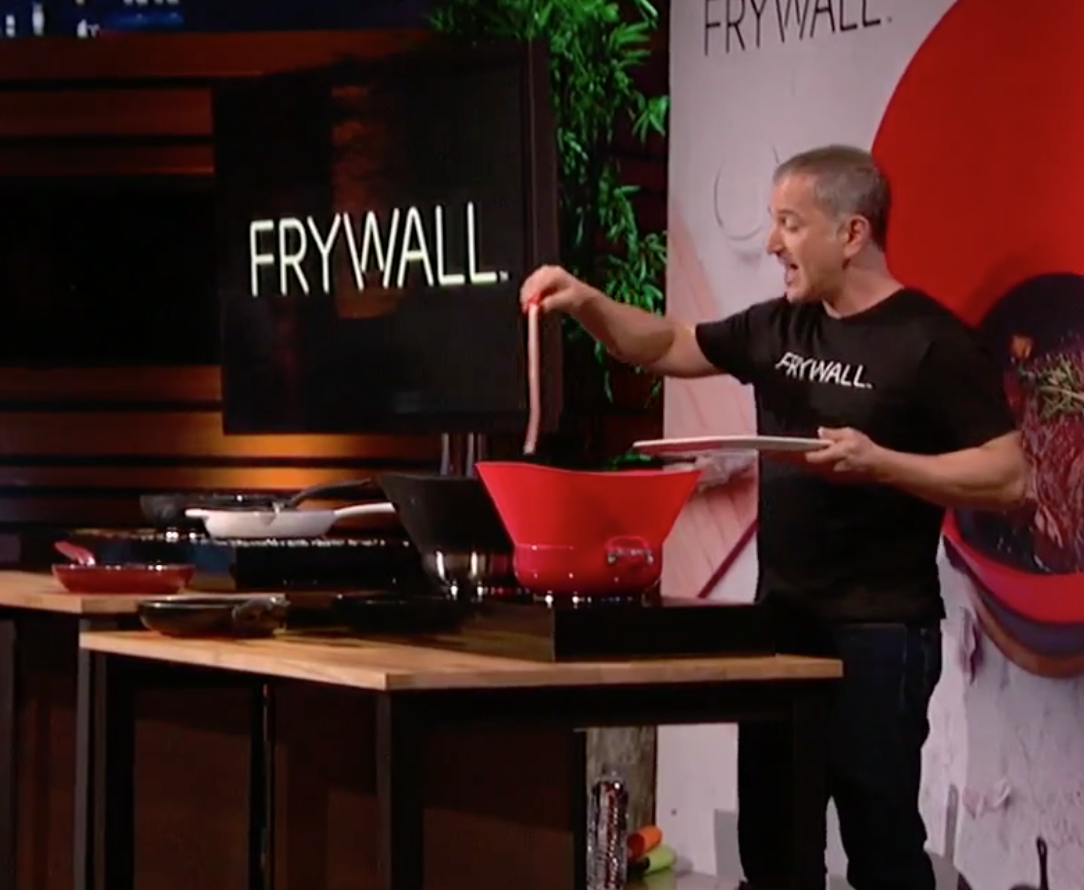 Standing in front of the other stove, he prepares to show the panel the Frywall. Taking it out, he swiftly puts it over one of the pans, and then the next. With that, he explains that the silicone “keeps the splatter off of you and the stovetop.” Continuing his demo, he begins to place a few strips of bacon into the pans, which leads to a noticeable sizzle.

“Unlike a lid or a splatter screen,” he begins, the Frywall “allows you to see, stir, and flip your food.” Not only is it suitable for meat, but it is also a great way to cook greens, the creator says. As the camera pans towards the sharks, many already seem impressed with the product.

Moments later, Reiner states that the Frywall can be popped into the dishwasher for easy cleaning. Once clean, it can then be “rolled up for compact storage.” With his demonstration complete, he offers to give the sharks some samples—as well as some wine.

Shortly afterward, Robert asks him about his background. Explaining, Reiner begins by saying that he has always been a home cook. After creating the Frywall in his own kitchen, he was surprised to learn that nothing like it had ever been made. Jumping at the opportunity, he subsequently turned it into a business. Still, he was hesitant to pursue the venture full-time due to “the great unknown.”

Continuing with his story, he tells the sharks that not long after creating the product, he had found out that he would be out of a job. With his newfound free time, he began to work on the Frywall, whose prototype he created in three months. From there, he began to sell it on the market just months later. 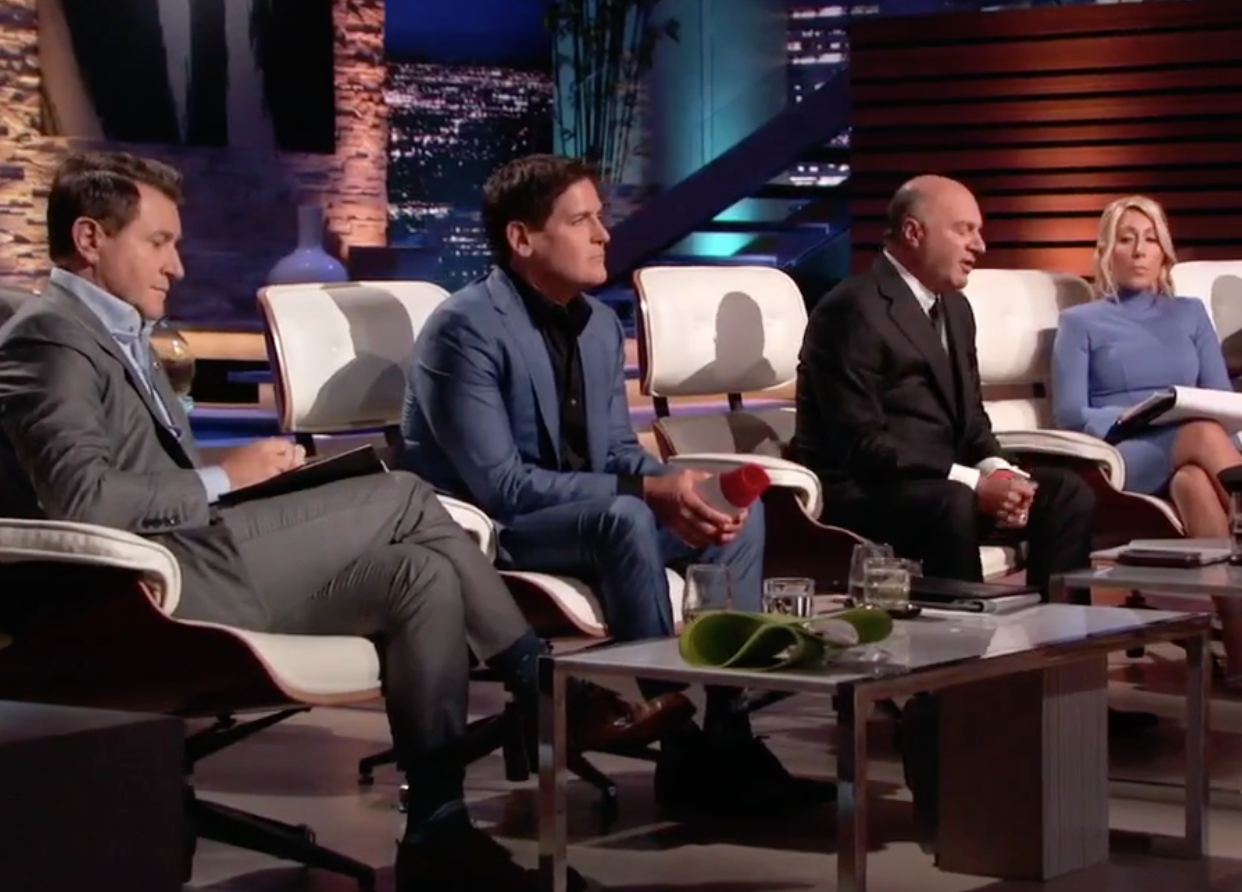 Impressed, Lori asks whether or not the product is patented, to which he says that it is utility patented. Next, the topic of the cost is brought up by Mark. In response, Reiner tells him that the Frywall sells for $25, while it costs about $5.50 to make. When asked about the route of sales, he states that approximately 70% is through their online website.

With further prompting, Reiner tells the sharks that the company has done over $800,000 in sales over the past year. Continuing, he states that the product is currently on the shelves of 55 independent retailers across the country. When asked whether or not he has been approached by any big retailers, he says that he is currently in talks with Bed Bath and Beyond.

A fan of the project, Kevin is the first shark to make him an offer—$100,000 for 15% stake in his company. Seconds later, however, Robert backs out, stating that while it is a great product, “it is not for [him].”

Asked by Daymond what he has planned for the brand, the creator is optimistic that there is still a lot of potential for the Frywall, as they’ve only skimmed the surface of the market. Continuing after some chatter from the panel, he reiterates the importance of going retail with the product. Agreeing with that point, Daymond subsequently offers him the same offer—$100,000 for a 15% stake. 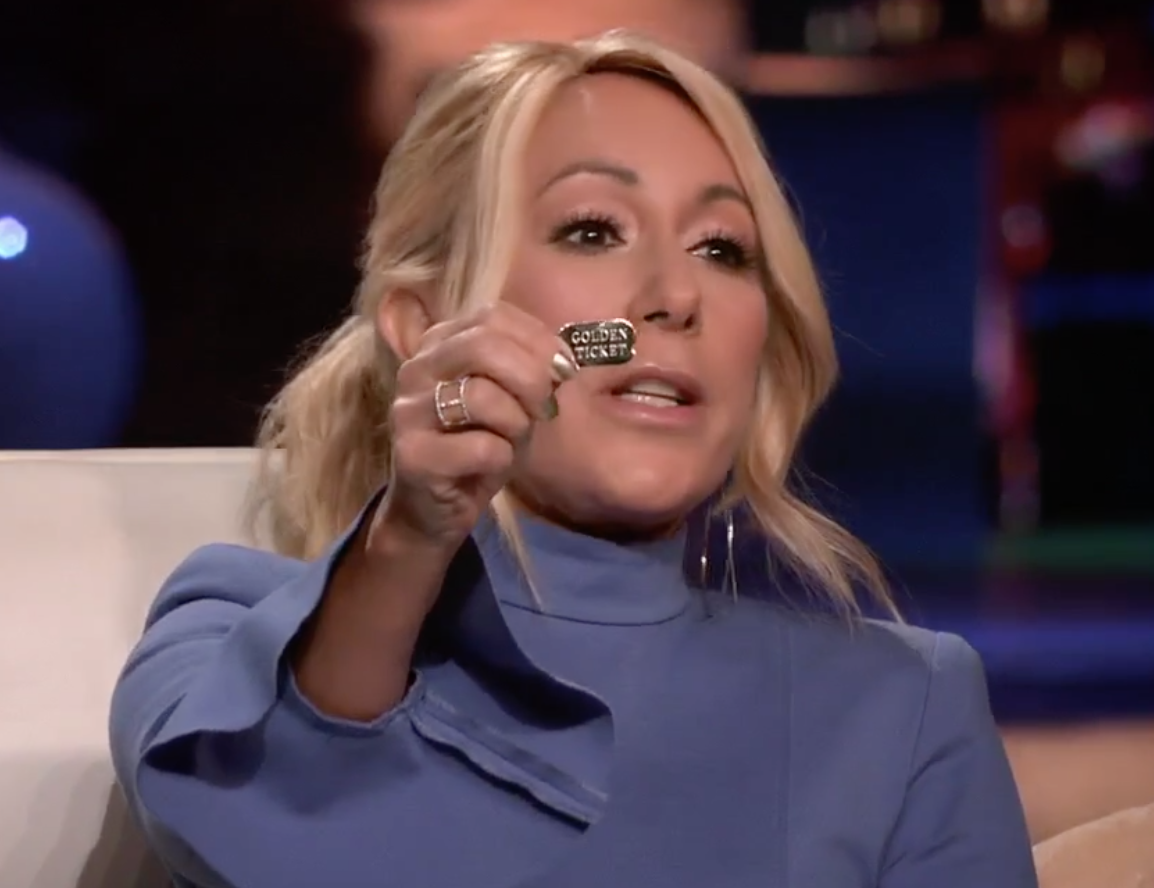 As Reiner contemplates his offer, Lori surprises everyone by showing off her golden ticket (literally, a small ticket made out of real gold). Explaining the item in her hands, she says that she gives the ticket to her favorite product on the show. As Reiner looks on with a smile on his face, however, the rest of the sharks can’t help but laugh at Lori’s silly gesture. Continuing, Lori tells him that she is willing to give exactly what he’s looking for—$100,000 for a 10% stake. As a bonus, she will even fund his orders, with a line of credit indefinitely.

Having said what she wanted to say, Lori leaves him with one question—“Are you going to take it?” With a grin, Reiner quickly tells her that he thinks she would make a great combination for the product. While they’re still talking, however, Daymond suddenly exclaims that he has a counteroffer. Revising what he offered before, he tells the creator that he’s willing to give him $100,000 for a 10% stake—as well as “his gold tooth from high school.”

Despite being offered what he was looking for by two of the sharks, however, Reiner doesn’t immediately accept. Instead, he asks Mark whether or not he has anything to say about the deal. To his surprise, however, he tells him that he is out. With that, he is back to considering the previous offers.

The decision seemed to be an easy one, however, for Reiner almost immediately pointed out at Lori. Giving her his full attention, he happily exclaims that they have a deal. As if on cue, the blonde quickly walks up to give him a brief hug, during which the rest of the sharks give their congratulations. Incredibly happy, the creator can be seen smiling from ear to ear. To top things off, Lori eventually hands him her golden ticket, which is made from real gold.

With a few thank yous, Reiner turns around to leave the set—with Lori’s golden ticket in his hands. Noticeably happy as he walks backstage, he exclaims that he is glad to have chosen to follow his dream, instead of having looked for another job “in an industry that he didn’t like anymore.” Excited to be able to work with Lori, he finishes by saying that with her, he believes that “the product will go everywhere, really really fast.”

Frywall in 2018 – The After Shark Tank Update

Since the cooking gadget was featured on Shark Tank, more than six months have passed. How is the company doing nowadays? Was Reiner able to bring the product to retail stores with Lori’s help? Let’s have a look. 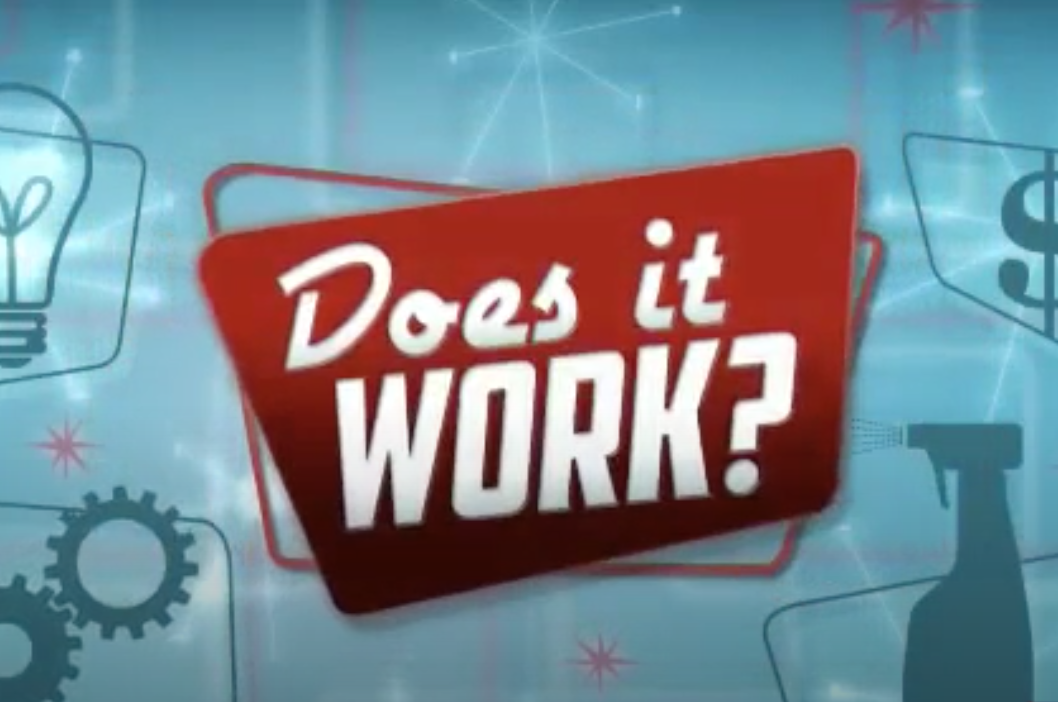 Just a month after the product was featured on Shark Tank, it was put to the test on KWCH12’s Does It Work?. For the segment, the Frywall was handed to Lara Shamblin, a store manager at Jimmy’s Egg—an award-winning breakfast and lunch diner. Upon examining the item, she quickly notes that “it looks like it might clean up nicely.” After briefly reading through the instructions, she subsequently drops the silicone cover onto a 10-inch pan.

Putting it to the test, Lara subsequently puts in some bacon, which quickly sizzles. Moments later, it becomes obvious that the Frywall is in fact, effective at keeping splatter to a minimum. Giving it a touch, she comments that the silicone has become quite hot—though not hot enough for her to start worrying about it melting.

Wanting to test whether or not it’d prevent splatters even during stirring or flipping, she grabs a sirloin steak from the freezer and puts it onto the pan. Flipping the beef, she is pleasantly surprised to see that there is indeed no mess around the cooking area. Continuing along, they subsequently put the Frywall into the dishwasher for a clean. Once again, it lives up to everyone’s expectations as it comes up clean, and ready to be used again.

A few months after being tested on KWCH12, it was announced that a few new colors would be added to the Frywall line—more specifically, a black for the 12”, a charcoal for the 10”, and a grey for the 8”. Not only that, but an “Ombre” set would be made available exclusively through the retailer Food52. In terms of the most recent news, the product was picked up by Target in June 2018.

As far as what people have to say about the Frywall, the general consensus has been tremendously positive. For instance, the silicone cover currently has a four and a half star rating from over 300 reviews on Amazon. Taking a closer look at the reviews, it would seem that most users agree that that the product is extremely effective at eliminating splatter in the kitchen.

Similarly, the reviews for the Frywall have been overwhelmingly positive on their official Facebook page. At the time of this writing, it has the five-star rating from over 260 reviews from verified buyers. For those who might be interested in reading some of the reviews, you can do so here.

Interested in getting a Frywall for yourself? If so, you’ll be happy to know that there is currently a promo on their official website, where you can get free shipping within the United States (offer lasts until July 13, 2018).

Considering the success of the product, will Reiner be returning to Shark Tank for an update anytime soon? Unfortunately, at the time of this writing, nothing has been announced. We’ll let you know as soon as we hear anything.