Eugenia Chen started her company Pandaloon in 2013. At first, it was a niche web store that sold panda related gifts and clothing items. She is fairly successful in that business and was able to make a profit in the first year. One year, she decided to design and hand sew a panda costume for her Pomeranian puppy Huxley. She made a video of it for Halloween and posted it on YouTube. It quickly went viral and obtained over 140 million views.

After that, she began to take preorders for the panda costume and designed other dog costumes as well. Frustrated at the lack of jobs in her field, Eugenia decided to take this a full-time endeavor. Since she needed money to build up her inventory in time for Halloween she decided to go on Shark Tank to face the Sharks and possibly get funded. Let’s take a look and see if the Sharks would be as enamored with the idea of a panda puppy as the Internet is. 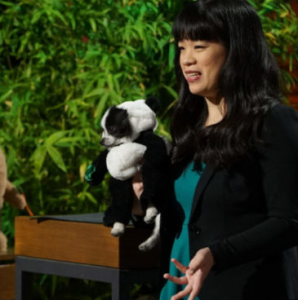 Eugenia walked out onto the Shark Tank and stopped on the stage to face the Sharks. She introduced herself and said that she was from California. She looked flustered and said that her business partner was not here yet because he was running late. She elaborated, stating that sometimes he wasn’t able to get himself dressed in the morning. The Sharks looked unimpressed. Eugenia surprised them by calling out for Huxley like she was giving commands to a dog.

The Sharks all laughed as a small dog ran onto the stage in a panda costume. Kevin and Mark were both confused, asking what it was. Eugenia told him not to worry – the panda was domesticated. She introduced Huxley as her panda puppy. She explained that she was seeking $60,000 for her company, Pandaloon. The investor would get 20% of the company in return as an equity stake.

Eugenia claimed that the panda party costume transformed pets into the perfect walking teddy bear. She brought up the video of Huxley walking around the panda costume and being adorable. The Sharks were all laughing uproariously. Daymond said that he felt bad for the dog. Kevin called making the dog wear the costume “sick” as he wiped tears from his eyes.

Eugenia continued, stating that the costume was perfectly engineered for both maximum cuteness and wearability. The costume is worn like a hooded sweatshirt, with the pets front legs going through the front legs of the costume. She showed him that the back had a pull string that adjusted to the size of your pet. It must’ve been difficult to continue her presentation because the Sharks were still laughing.

Mark said that the dog was going to have issues. Eugenia countered by saying that everybody loved the panda puppy. She insisted that the video of Huxley got more views than Beyoncé’s last music video. Lori asked her to clarify how many views, and Eugenia told her over 140 million. The Sharks seemed impressed. Eugenia explains that the video went viral by accident. She made the video as a fun thing to share with her followers on Halloween. It took off from there.

Eugenia said that Pandaloon started off with just the panda costume, and then graduated to the Panda Puppy Friends. On stage, she reveals for other costumes on stuffed dogs. There is a rabbit, a lion, a unicorn, and a polar bear. Eugenia stated that she brought samples, and she gave Huxley to Lori to hold. Once her hands were free of the dog, Eugenia passed out samples to rent the rest of the Sharks.

Mark asked Eugenia about her background. She said that she was from San Clemente was a small beach town in California. Her parents were immigrants from Taiwan. She ended up getting a Masters in computational science, and her bachelor’s degree was in math and applied science. She was researching genetic algorithms to optimize in your own network, and she taught math. Kevin raised up the lion costume and asked her why she was making costumes for dogs instead of using her degree.

Eugenia mentioned that she graduated during the recession and found it difficult to find a job. She found it necessary to string together up to five part-time jobs to make ends meet since she was having difficulty finding a full-time position. She said that was what drove her to the start Pandaloon. Lori asked her if she had any, word started manufacturing. Eugenia said that she had, and she was currently in the middle of the manufacturing process. The costumes would be ready in about a month.

Lori wanted to know what her costs were for each costume. Eugenia explains that each one cost about four dollars depending on the size of the dog. Sarah wanted to know how much he was planning on charging. Eugenia said that she wanted to charge $39.99 retail. Daymond looked shocked, and she addressed it. She explained that she had done her research with the largest costume manufacturer in the world, and they also have animal-themed costumes. She insisted that their price point was about the same for a costume that was more cheaply made. Sarah said that she thought it was a perfect price.

As she was speaking, Eugenia was putting Huxley in a new costume – the bunny. Mark cooed and said that it might not be as good as the panda, but it was still good. Daymond wanted to know if she was accepting preorders. Eugenia said that she was, but very quietly through her website. She already had a store called Pandaloon online. She explained that it had been open for three years, and she made about $100,000 in revenue each year.
Mark wanted to know what they sold, and Eugenia told him that they sold mostly panda related items such as apparel and gifts. Sarah asked her if the Sharks would be investing in Pandaloon as a whole or just the new concept of the costume. Eugenia said that she went and bundled it together because she didn’t have an impressive sales figure to show the Sharks with the costumes. This didn’t mean she wasn’t capable of selling $300,000 worth of merchandise over the lifetime of her business. She was profitable since her first year, and she did it all herself.

Sarah wanted to know what Eugenia wanted the money for. She answered that she wanted to expand her costumes into a line. She would need to roll out the inventory by Halloween. In order to do that she would need an investment of at least $60,000 to meet the minimum order quantity for the manufacturers.

Lori apologized as she went out, stating that she didn’t see a huge market for dog costumes. Eugenia nodded and looked sad. Daymond was up next, stating that he thought that dog costumes would bring joy, and that was evidenced by the fact that they almost fell off their seats laughing. He made her an offer of $60,000 in exchange for 35% equity stake. He said that he would donate 10% of his equity stake to animal charities.

Sarah also made her an offer. She said that she liked Eugenia and her products. She decided to match Daymond’s offer of $60,000 in exchange for 30%. She claimed that she had a lot more to bring to the table with her selling platform, and all of the women that she reached out to. Sarah thought that most people that bought dog costumes would be women. She continued, stating that she thought Eugenia was special and that she would be able to make it work. Eugenia thanked her for her offer.

Eugenia asked them if they would be willing to work together. Sarah looked open to it, that she wanted to make sure that Eugenia would give away more equity. Eugenia said that she would be open to that. Daymond said that he recognizes the value that Sarah could bring, but decided to stick with his own offer. Eugenia paused to make a decision and then addressed Daymond. She said that she recognized his influence in the pet market, and would love to accept his offer.

The two met on the stage to hug, and talk over their new business venture. In the after-interview, Eugenia said that she was excited to work with Daymond. She also liked the idea that some of her profits would be going towards rescue charities. Back in the shark tank, Kevin expressed his shock and dismay that someone had paid $60,000 for pet costume business.

Pandaloon Now in 2016 – The After Shark Tank Update 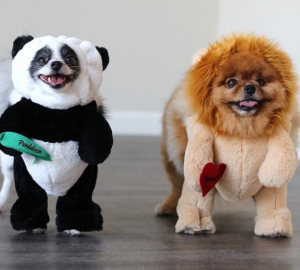 Since the Shark Tank episode aired, Pandaloon sales have gone through the roof. They pinned a tweet to the top of their Twitter account stating that they would be working as hard as possible to get everything shipped out as soon as possible from the rush of sales after the episode. They’ve also been doing meet-ups with Huxley and other costumed copies at Sue’s and tradeshow booths all around the country. If you do decide to purchase a costume from their website, make sure to send the picture to their official Twitter account. They will post it along with some positive words for the puppy. In addition to the costumes, the website also offers unique harnesses such as the tuxedo harness or the rainbow harness. Check them out by clicking here. The site now advertises that it donates a dollar to Pandas International for every panda related purchase made on the site.