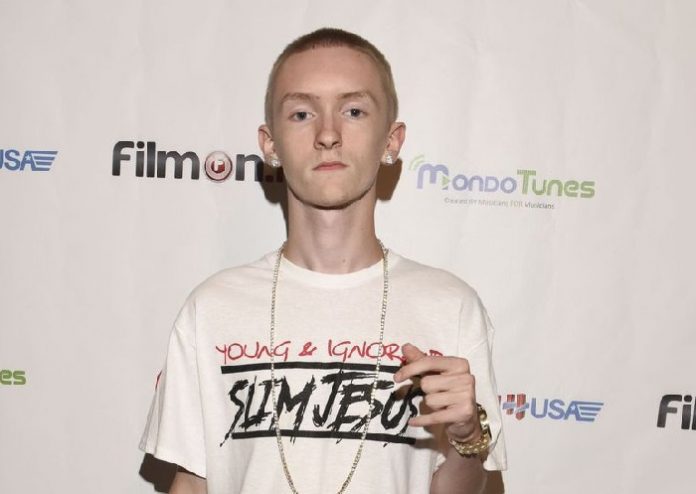 For a while, it seemed as if Slim Jesus had dropped off the face of the Earth. The rapper who talks life on the streets, but lives a life far away from the guns and drugs persona he portrays, had almost disappeared after the success of his viral hit ‘Drill Time’ in 2015.

The Ohio rapper has always had his share of criticism, and he attracts negativity like other rappers collect bling, but now in 2018 Slim Jesus is back, with his freestyle of G Herbo’s ‘Who Run it’ racking up millions of views on the WorldStarHipHop Youtube channel. Slim Jesus has been working with other, less well-known artists recently too, and his fans, as well as his ever-present critics, are wondering if he can repeat the media buzz he created with Drill Time.

But how much money has Slim Jesus made from his music? We’ll attempt to find out, as well as uncovering the mystery of his real name, and exactly what happened to that Twitter account that he once claimed to spend ten hours a day tweeting on.

How Did Slim Jesus make his money & wealth?

When Slim Jesus first released Drill Time on Youtube, back in August 2015, it quickly became a viral hit, for a number of reasons. Firstly, it was undoubtedly catchy, the bars were tight and well-delivered, and it won praise from many rap fans, but it was Slim Jesus’ image that gained the most attention, and plenty of criticism.

White rappers are hardly a novelty, but when they have the innocent features of a twelve-year-old and a body that must be 120 pounds at an absolute maximum, there’s a strange surrealism to lyrics about ‘Big 40’s with a thirty-clip’ that diss anyone caught in ‘Traffic at the wrong time’. Slim Jesus had some bling to bolster his image, and some tattoo’s, even if one of them was of an emoji, but as much as the musical content of Drill Time was admired by some, his image met with an equal amount of negativity from others, particularly other rappers.

All that controversy only created more interest in Drill Time, and the video to it that most agreed was a strange mix of angelic features and gritty street slang, but there’s no doubt that once people heard the track, plenty of them found it to their liking. You’d have to be tone-deaf to consider the backing-beat anything less than slightly catchy at the least, and the view count for Drill Time quickly climbed into the tens of millions.

But despite the attention, Slim Jesus has never managed to duplicate the viral success of Drill Time in the three years since his sudden fame. His follow-up track ‘Buck Buck’ managed a few million views, but nothing compared to the 40 million+ views that Drill Time has since achieved. Later releases didn’t even make that much impact, his last release on his Youtube Channel, which now has over 233,000 subscribers, was ‘Taking Risks’ in June 2017, but that had none of the energy of Drill Time, and didn’t even manage half a million views.

Slim Jesus was born April 10th 1997, in Hamilton, Ohio. His first name was revealed after the success of Drill Time as Easton Philips, and in those first few attention-filled months after his viral fame, he swore to take over Twitter by spending hours tweeting, in much the same way that Snoop Dog once had. But after Slim Jesus’ Twitter account was hacked, by someone with some offensive and profanity-filled views about race, Slim’s appearance, and his sexual interests, Slim had second thoughts about his domination of Twitter. The hacker also revealed that Slim’s real name was Robert Church, and as a result of the hack, Slim Jesus started a new Twitter account, but he soon gave up on that one too for reasons unknown and left it to stagnate with only 375 followers.

Since then Slim Jesus has moved to Instagram, where he has built up a following of 104,000 fans. His Soundcloud account, which pre-dates his Youtube success, has 36,000 followers, and it was there that he put out the inevitable remix of Tay-K’s ‘The race’, after that went viral in mid-2017, but apart from that Slim Jesus has been very quiet there too. To catch up with Slim Jesus in 2018, it’s his Instagram and Facebook accounts where his latest activities can be discovered, and he’s still making music now in 2018, even if he’s not promoting it on his widely known Youtube account.

The fact that Slim Jesus’ real name is still not known with 100% certainty, is a good indication of the secrecy that surrounds his personal life. Considering the confrontational nature of many of his fellow rappers, it’s perhaps not surprising that Slim isn’t advertising his home address or phone number. It’s not known if Slim Jesus is dating at the moment, and there’s no indication he has got married or has children.

Slim Jesus’ Facebook and Instagram accounts reveal that he’s making music again in 2018, and this time he is working with WorldStarHipHop, who released his ‘Who Run It’ remix on April 16th, 2018 to their 14 million subscribers. The track has notched up over 4 million views since then, which makes it Slim’s most successful work since Drill Time, and that success is deserved. He delivers fast-paced bars with skill and enthusiasm throughout the track, and even though he still receives plenty of negative criticism, his fans are still there to demand more from Slim Jesus, and they want more from him now, if not sooner.

Where does Slim Jesus Live?

Slim still lives in his hometown of Hamilton, Ohio, although no information about his home is known.

Where Can I Find Slim Jesus’ Latest Releases?

Slim is promoting his latest work on his Facebook account, although he does keep fans informed about his activities on Instagram too. Recently he announced a collaboration with the little-known Stack Money Gang (SMG), on a track entitled ‘Mikey Gang’. The collaboration was released on June 1st, 2018, on the SMG Youtube account, which has only 400 subscribers.

Slim Jesus has only promoted this latest track through his Facebook account, almost as if he doesn’t want the haters to find it, but that hasn’t worked as the Youtube comments show. Even so, there’s no doubt that Slim is the star of the track, both in terms of fame, and in his lyrical ability. Slim Jesus has recently admitted that he just wants to keep on making music, but on the down-low, and his lack of promotion for his SMG collaboration, and his frequent linking to his long-dead original Twitter account, shows that now in 2018, he’s doing exactly that.