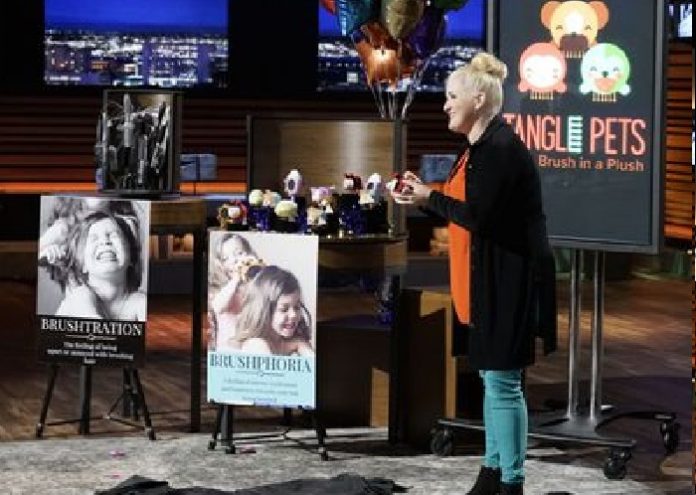 Liz Martin, the founder of Tangle Pets, is a mom to three young daughters, but when necessity came along, in the form of daily battles with her kids over their dislike for brushing their hair, Liz became the mother with an invention to solve the problem. One day, while attempting to get those untidy tangles straitened out, she tempted her little monsters with the simple distraction of a plushie toy stuck on top of a hairbrush. The ploy worked like a charm and Liz, who has a background in sales, realized she had just hit on a novel way to avoid her daily battle, and she also realized that it was something she could sell to millions of other moms with kids who hated the hairbrush.

Liz, as the daughter of an inventor, knew that she needed funds to develop her idea, but instead of Kickstarter or Indiegogo, unconventional Liz applied for the TV game show Pyramid. It may have been an unusual strategy, but it worked. Liz won $50,000 on the show in 2016, and she proceeded to develop a prototype for her range of Tangle Pets kid-friendly brushes. Eventually, she realized that $50,000 wasn’t enough, she turned to Kickstarter, but the crowd-funding community didn’t share her vision for Tangle Pets, and the campaign didn’t reach a fraction of its target.

As the Sharks quickly learned, Liz Martin is not the type of person who lets a little thing like failure diminish her incredible energy, and she applied to Shark Tank to see if she could get a Shark to join her crusade for de-tangling kids without temper tantrums, and in October 2017 viewers got a chance to see the force of nature that is Liz Martin, as she pitched to the sharks in an unforgettable whirlwind of energy.

It was the last pitch of episode 3, season 9 of Shark Tank. Perhaps the sharks were already thinking of relaxing, or maybe destroying the competition, whatever it is that sharks do to unwind after a long day of listening to pitches, but they were almost certainly unprepared for Liz Martin when she burst into the tank, to make a pitch that was overflowing with more enthusiasm than any sane human should ever possess.

Liz announced she was looking for a $75,000 investment in exchange for 35% of the Tangle Pets business. She flew into an explanation of her difficulties when trying to brush her own daughter’s hair, and phrases such as ‘The most exhausting and impossible challenge known to humankind’ were thrown about, while the sharks looked momentarily taken aback by Liz’s incredible energy.

The sharks barely had time to groan at Liz’s use of the word ‘Brushtration’, before she was unveiling her collection of brush-plushie combinations with balloons and an explosion of glitter. Liz ended her high-energy pitch by asking the sharks if they were ready to get ‘Fierce with tangles but friendly with kids’, and the sharks were all laughing, perhaps because Liz had just talked at high speed for two minutes, without appearing to breathe between words.

Liz handed out samples of her Tangle Pets. There were several types, a Tangle Kitty, a Tangle Ladybug, a Tangle Puppy and so on, all the type of thing that young kids were going to love, but Kevin O’Leary is a long way from childhood and seemed unimpressed with his Tangle Turtle. He remarked ‘It’s a brush’, less than enthusiastically, but Liz wasn’t going to have that kind of attitude and she quickly came back with ‘You’re not feeling it because you haven’t got any hair to brush with it’.

Liz was clearly not someone who was going to be intimidated by the sharks, and the banter produced another round of laughter, as Mark Cuban joked that Kevin had the kind of hairy back that could do with a good brush. The mood in the tank was good, the banter and laughter amongst the sharks continued, but Kevin was soon insisting that the Tangle Pets were nothing but an ordinary brush. Liz, in turn, insisted her brush was different, ‘But how is it different?’ Kevin wanted to know. Liz revealed her brush had been designed, by her, as an original prototype, it was manufactured by her company in China, and she also had a utility patent pending.

Kevin was blind to the cute appeal of the plushie toy, even if the other sharks were chorusing ‘Awww’ by this point, but Liz wasn’t discouraged. ‘You’re sassy! I Like you’, she told Mr Wonderful, who seemed slightly put out that he wasn’t creating the climate of fear that he usually generated with entrepreneurs, but Robert moved the subject on to prices before he could respond.

Liz revealed that the Tangle Pets cost $2.60, including transportation costs to the US. They sold for $5 wholesale and $12 retail, which momentarily impressed the sharks. Liz also revealed that so far she had made $8,000 in sales, which led to Kevin remarking sarcastically that if things continued that way, she could make hundreds of dollars. Liz unsurprisingly had all the answers to that offhand jibe too and with a few more leg kicks and dance moves (Yes, really) she proceeded to tell the sharks all about it.

Liz had only received her first shipment in November 2016, but shortly after her husband had been diagnosed with a brain disease. At that point her primary focus became her husbands health with the business taking a back seat, but now that he had been given a clean bill of health she was ready to get back on track, and she confidently asserted that she would ‘Easily’ sell $100,000 worth of Tangle Pets in the next year.

High-energy displays from entrepreneurs sometimes backfire in the Shark Tank, and Mark Cuban usually prefers a more laid-back kind of partner. He asked Liz if she ever ‘Turned off’, and she admitted she did when she was sleeping. Mark told her that she had accomplished incredible things so far and that she was ‘A Force of Nature’. But Mark followed that up with ‘You drive me crazy’, and for that reason, he was not going to be making any offers for Tangle Pets, Mark was out. Robert Herjavec was more diplomatic, he admitted that he didn’t ‘See it’, and with that, he joined Mark in dropping out.

Kevin O’Leary was next to speak. He didn’t see the merit in Tangle Pets, he thought Liz was an ‘Interesting’ person, and that she had a lot of energy, but he believed that in a years time the Tangle Pets would still just be a brush with a toy attached. Liz interrupted to disagree, telling him that in a years time every brush would look like a Tangle Pet, but Kevin wasn’t so optimistic, and he was out too. Barbara Corcoran told Liz that if she tried to sell her a Tangle Pet, she would have to buy it, because of Liz’s ‘Wild-ass enthusiasm’, but although that enthusiasm was a good thing, Barbara thought that working with Liz would be ‘Exhausting’. Barbara dropped out too, leaving Lori Greiner as the only shark remaining.

Liz finally realized that her extroverted enthusiasm may have been her greatest mistake in the tank, and she replied to Barbara that she could ‘Turn it off’, but her protestations were not needed, as Lori had already seen several merits in the Tangle Pets that the other Sharks had missed.

Lori revealed that the brush used in Tangle Pets, the brush that Liz had designed herself, and that she manufactured in China, was the best brush to use, a ‘Wet-Dry’ brush that could be used in any type of hair without pulling it. Lori asserted that for someone who wasn’t an inventor to come up with it had been ‘Amazing’. Lori also remarked that the Plushie pets were of particularly high quality, and not only that, she loved the name Tangle Pets too. Lori described Liz and Tangle Pets as the ‘Perfect Pie’ for those reasons, and she had an offer to make, but she did warn Liz it was an aggressive one, as the company was so new.

Lori believed that she would need to do a lot of work to grow the business, but she could get the Tangle Pets into retailers such as Bye Bye Baby, as well as promoting them on QVC. All she wanted in exchange for the $75,000 investment and her help was 50% of the company. Liz looked ecstatic, as well as slightly surprised, to have suddenly been saved from total failure in the tank by Lori, probably the most suitable of all the sharks for her business. She made a half-hearted attempt to bargain Lori down to 45%, but Lori stressed the amount of work involved for her, and told Liz that her offer was ‘The best shot you’ll ever get’.

Without a pause, Liz accepted the offer, after which she virtually danced out of the tank while telling Lori she was ‘Awesome’, and the other sharks that they didn’t know what they were missing out on. While the sharks were slowly recovering from the experience of meeting the force of nature that is Liz Martin, the enthusiastic entrepreneur was outside, making the kind of excited noises that Lori will probably get used to hearing in the future.

Tangle Pets Now in 2018 – The After Shark Tank Update

Liz Martin’s enthusiasm during her pitch may have been too much for most of the sharks, but Lori Greiner’s instinct for successful products in the children’s market is usually dead-on. Since the Tangle Pets segment first aired on Shark Tank in October 2017, the company has received a deluge of interest, but Lori’s cautionary note that the company is so new that it will require a lot of work to grow has proved to be correct.

Even before Shark Tank, Liz Martin was suffering from inventory shortages on the company website. She had asked customers to sign up for e-mail notifications so that she could let them know when the Tangle Pets were back in stock, she even offered a 10% discount if they signed up, as a thank you for being so patient. Thousands of orders came in after Shark Tank, and by mid-December, Liz posted a video on the Tangle Pets Facebook page explaining that the Tangle Pets wouldn’t be ready for Christmas. Safety precautions and quality tests needed to be undertaken in order to get the Tangle Pets on the shelves of retailers like Walmart and Target, but Liz assured her customers that Lori was working to get Tangle Pets ready for retail sales, with no corners being cut.

Although Liz was unprepared for the orders that Shark Tank generated, she has now managed to get enough stock to sell Tangle Pets from the website, and she’s gained interest from thousands of potential future customers. Tangle Pets have been advertised on TV, and have been featured on QVC, but so far the company is too small to take full advantage of the publicity. Tangle Pets are available in small quantities from the Tangle Pets website, but for now, Lori Greiner will have to channel the incredible enthusiasm of Liz Martin into getting the business ready for mass-market production in the retail World, and then it’s a sure thing that Liz will let everyone know all about it.