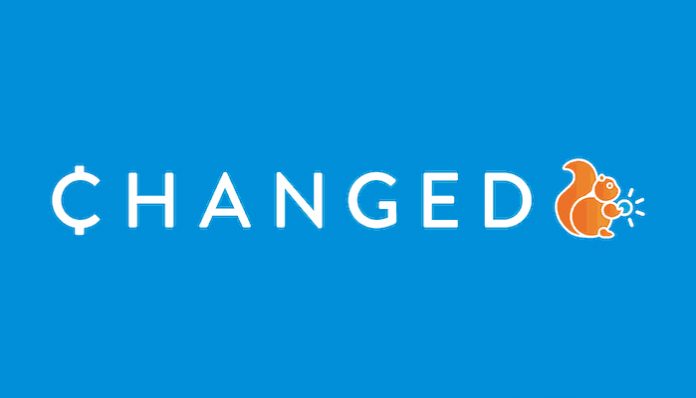 A mobile app, ChangEd helps individuals pay off student loans faster by rounding up spare change from everyday purchases. Not only does it help to shorten your repayment, but it also gets you out of debt faster, which means less interest. Simply to use, users simply have to link their credit or debit cards to their account. From there, the app automatically rounds up your purchases to the nearest dollar—with the extra change going towards student loans.

The brainchild of Dan Stelmach, ChangEd came to be after he noticed that a significant portion of his student loan payments was going towards interest. Realizing that it’d take a long time to repay the full amount, he began to think of a solution. Before long, a light bulb switched on in his head. By rounding up spare change and sending it to his student loans, he brainstormed, he’d be able to pay off his debt sooner.

Talking over the idea with his brother Nick, the pair eventually decided to come up with a business plan. Running some numbers, they were surprised to learn that the average person could save upwards of $50 a month, simply from rounding up spare change. With that, they proceeded with creating the app. With the help of a local developer Mike Land, they launched a beta version in January 2017. From there, they officially launched (for iOS devices) in March 2017. Featured on Apple’s “New Apps We Love” section, they gained well over a thousand users within just a few month’s time.

As one thing led to the next, it was made known that the founders would have the opportunity to pitch their mobile app on the popular reality series Shark Tank. One of the groups to be featured in season nine, their episode aired on January 28, 2018. 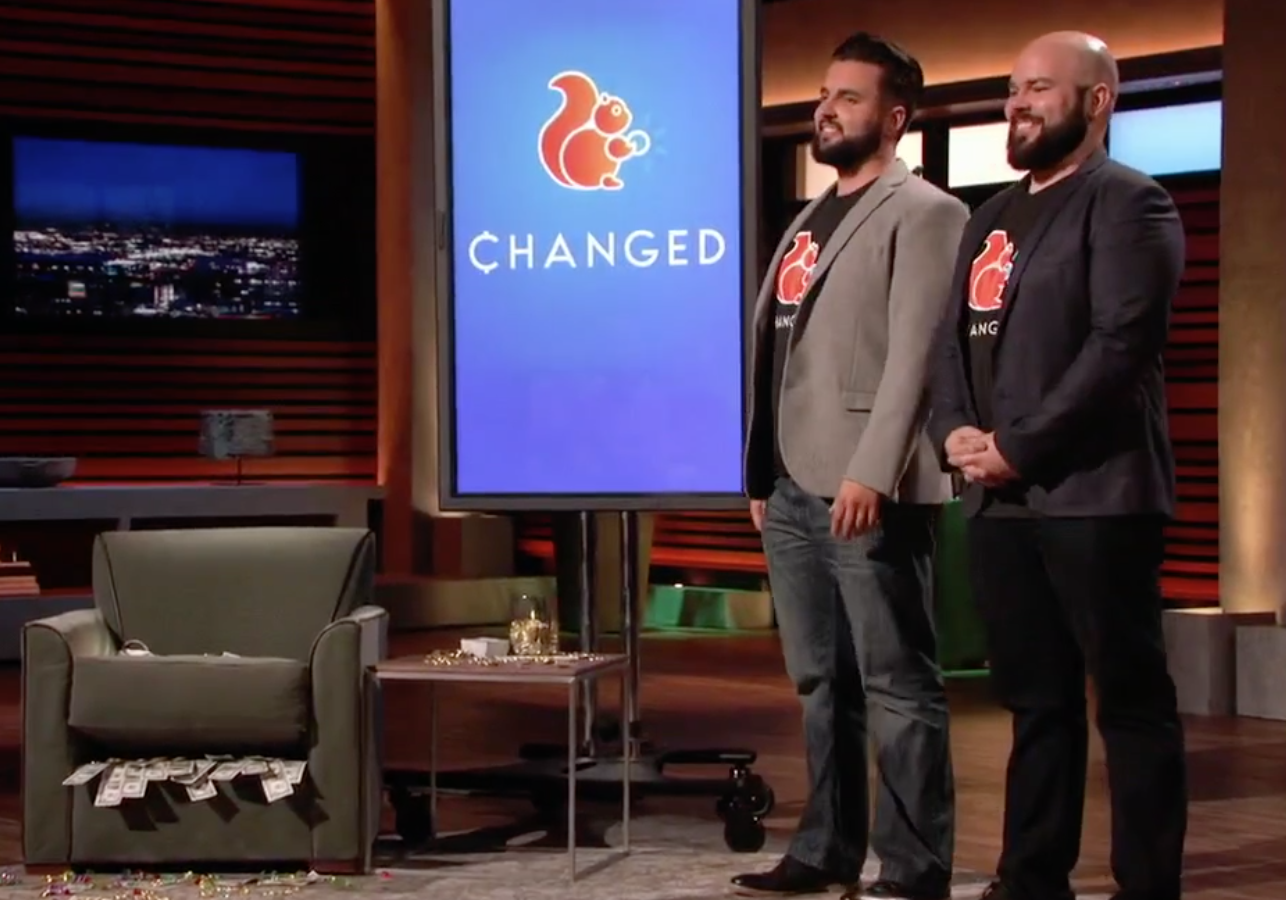 Walking into the tank, Nick and Dan introduce themselves as the founder of ChangEd. Seconds later, they tell the sharks that they’re looking for a $250,000 for 15% of their company.

Jumping into their pitch, the pair shares that student loan debt sits at $1.3 trillion in the United States. While they agree that college education is important, they highlight the fact that many individuals end up having to pay back their loan for the next 10 to 25 years. A bother in that “it delays any goals you have”, the brothers go on to tell the sharks that that’s exactly why they had created ChangEd.

Continuing, the founders explain that change can help Americans pay off student debt. As the sharks look on, Nick says that they will be demonstrating how the app works. Picking up where he left off, Dan reveals that users simply have to create an account and link their bank, to get started. From there, he states, “change from your everyday purchases will be round up to the nearest dollar.”

Illustrating with an example, the founder states that a coffee purchase of $3.45 will provide $0.55 towards student loans, as that is how much there is after being rounded up to the nearest dollar. Seconds later, a list of other examples is shown on the screen. Elaborating with a smile, Dan states that all the roundup change is stored in a personal FBIC insured change account. From there, once $100 is accumulated, a payment will automatically be put towards your student loans. 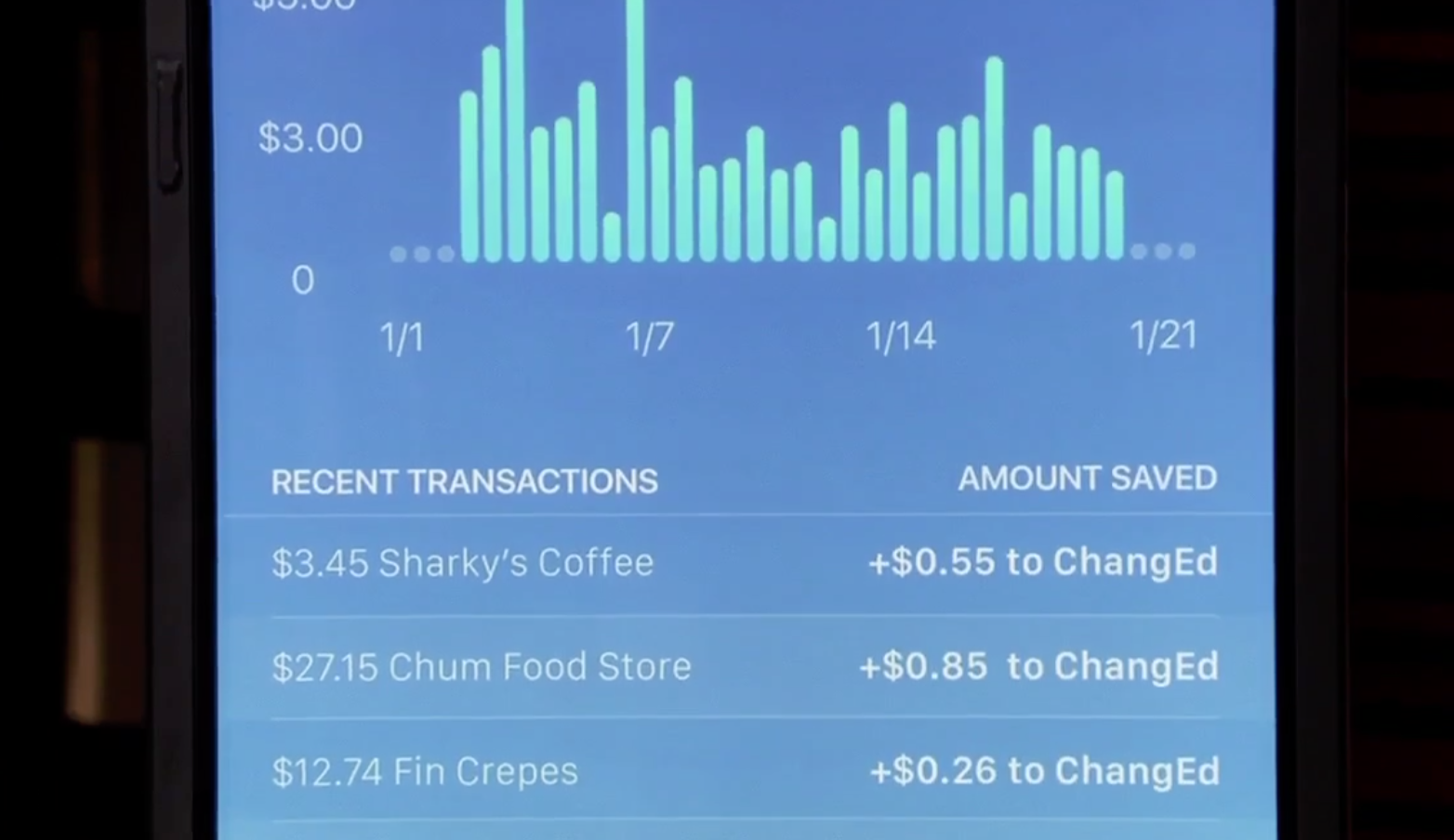 Revealing more, he tells them that each user has their own dashboard on the app, which displays their daily roundups, change balance, and payments sent. As the camera pans towards a particular screen, Dan reveals that the coolest part is being able to see the time and money saved with each payment. Continuing, he states that the average user can pay off their student loans “years sooner for thousands less with the ChangEd app”.

Almost immediately afterwards, Lori asks them about their active user base. Answering her question, Nick reveals that they’ve received over 9,000 downloads with just under 1,000 active, opened FDIC-insured accounts since their launch in March. From there, he also adds that they’ve since sent over $25,000 in student loan payment—a number that they’re hoping to increase to $100,000 by the end of the year.

The first shark to talk, Mark agrees that the app is a good idea. As impressed as he is with the concept, however, he begins to question the platform from a business point of view. Asked how they will deal with “more feature-rich competitors”, the brothers share that they are the first app to specifically target student loans. Having learned over the past few months how difficult it is to navigate applied payments, they reveal that they’ve developed relationships with 90% of the student loan services in the country.

Impressed with their mission, Alex subsequently asks about their background. In response, Nick reveals that they were both raised by a single mom, who had always told them they had to “work their butts off to get what they wanted.” Not so well off, Dan explains, both he and his brother had to borrow money to go to college. Giving a personal example, Nick states that he pays $800 every month towards his student loans. Knowing how painful the whole process can be, they decided to put together something that can help. 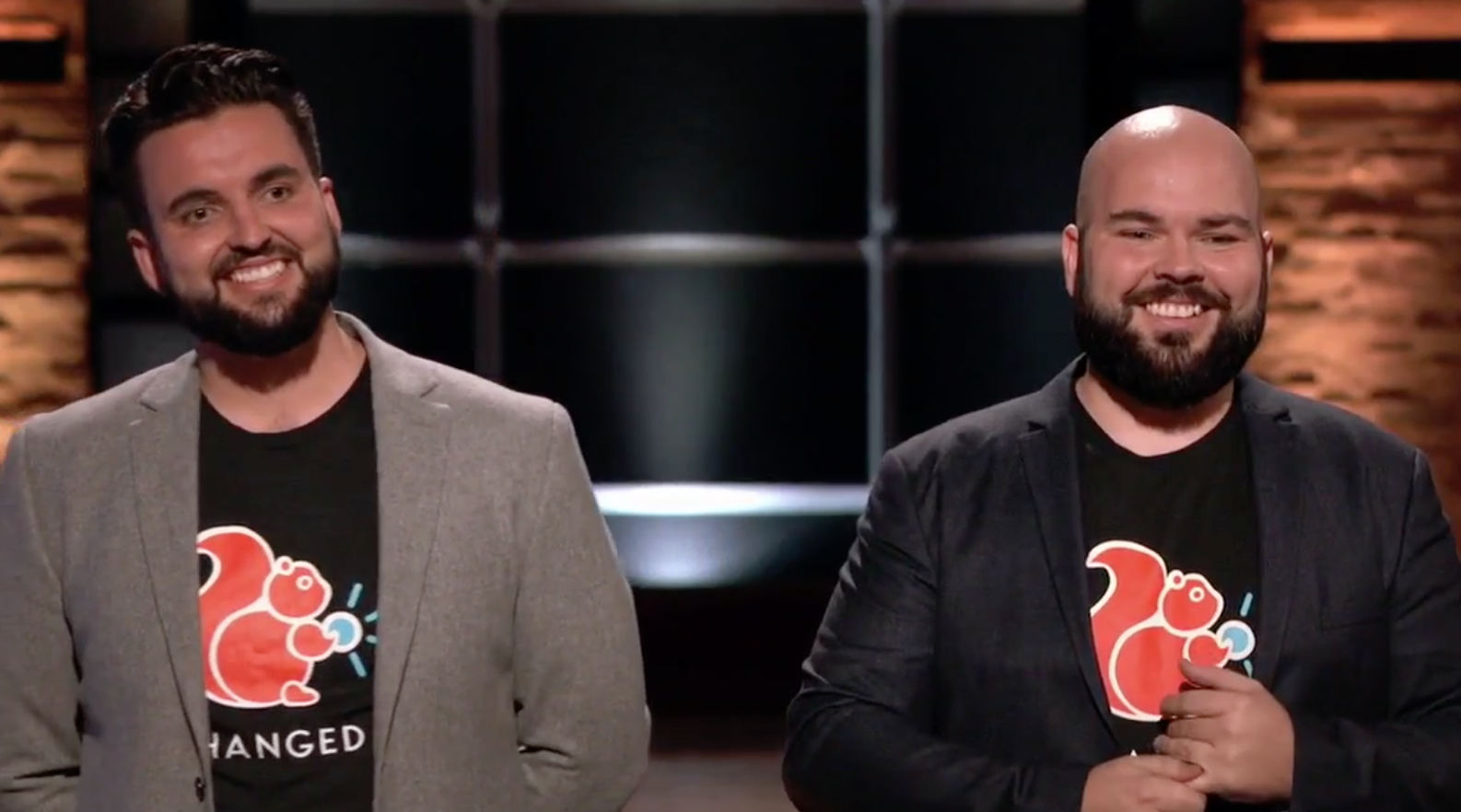 Prompted by Lori, Dan divulges that he has worked in sales for eight years. As the attention goes to Nick, he reveals that while the project is his full-time job, he makes money by driving Uber in the mornings. Subsequently asked about how the app is monetized, Dan answers by saying that they charge a $1 monthly fee. Just as he’s about to elaborate further, however, they’re asked how many active users they had last month. Replying his question, Nick tells him that they’ve had 800 opened accounts.

While she likes their charisma, however, Barbara raises a concern—that she can easily see banks doing the same thing. Moments later, she lets them know that she will be dropping out. Thanking her for her time, the founders’ attention goes to Alex next, who to their dismay, highlights the fact that their app does not have a competitive advantage. With that, he also backs out of a deal, leaving three sharks.

From there, Robert questions their $1.5 million valuation. Told that their valuation is more of an art than a science, the sharks can’t help but laugh. Continuing through their laughter, however, Nick explains that they’re in a market that “is screaming for a solution.” Elaborating, he says that they’ve talked to experts, who’ve valued their company from $1.6 million to $2.5 million. 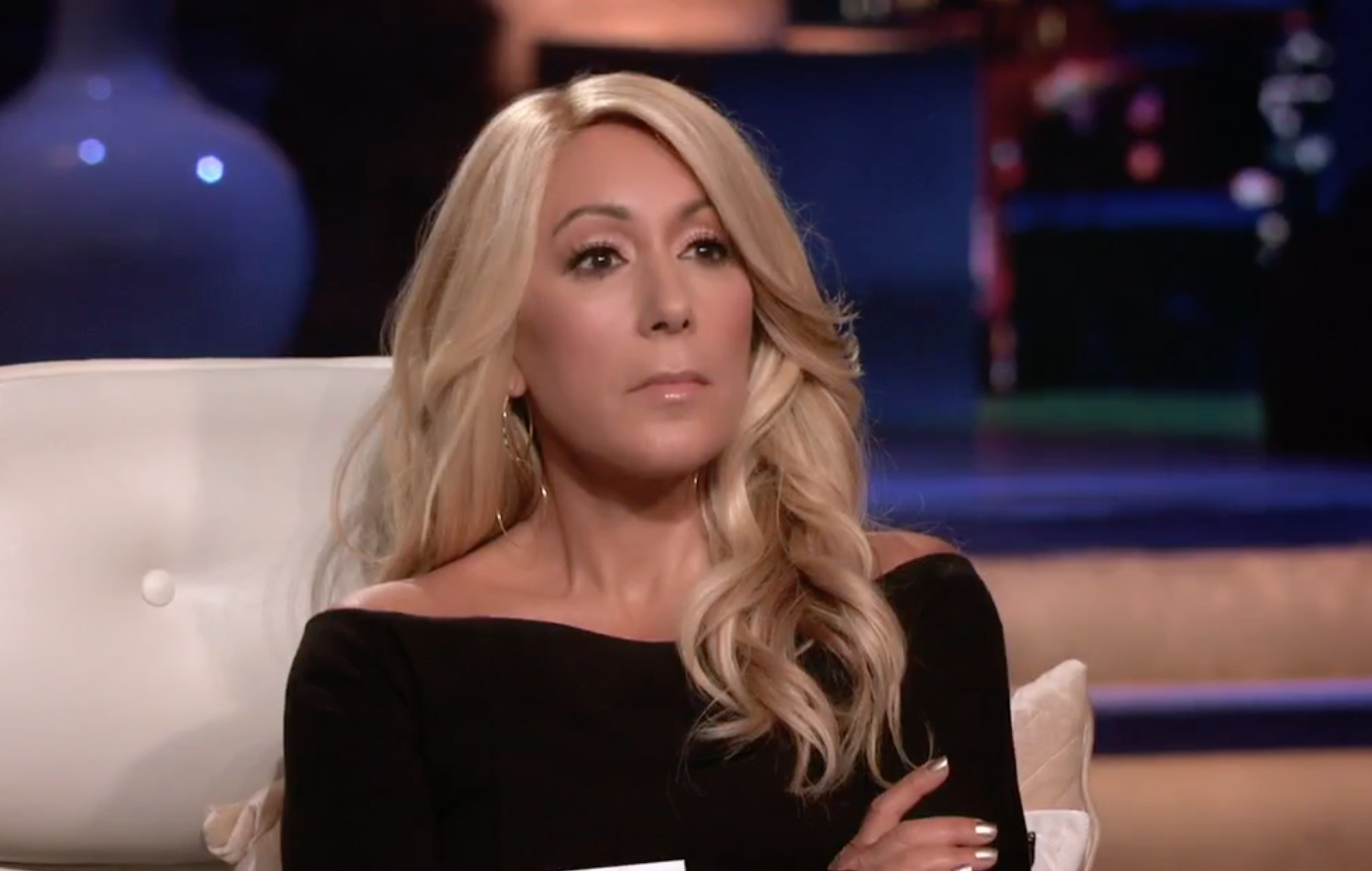 Just as he’s about to go on, however, Robert voices his concerns about the company being new. Despite that, the shark is willing to give the brothers an offer, much to their surprise, however for 48% stake. To that, however, Mark scoffs immediately. While grateful, the siblings make it known that they’d like to hear from the rest of the panel before making a decision.

With that, Lori begins to talk. While she admits that their project is admirable, as it works to solve a crippling problem, she believes that the valuation is too high. As a result, she too also drops out. Just as the brothers thank her for her time, Mark asks whether or not they’ve raised other money. In reply, Nick tells him that they’ve raised a small amount—around $50,000 from family. Asked how much they’ve put into the company themselves, Dan reveals that he’s put in his entire life savings, which is about $30,000.

Continuing, Mark asks the founders how they will be raising their next $10,000. Explaining their strategy, Nick says that they will be tapping into the alumni organizations and working with universities. To his dismay, however, the shark comments that he doesn’t see that scaling. Elaborating, he tells them that they haven’t gone through the “customer acquisition process.” 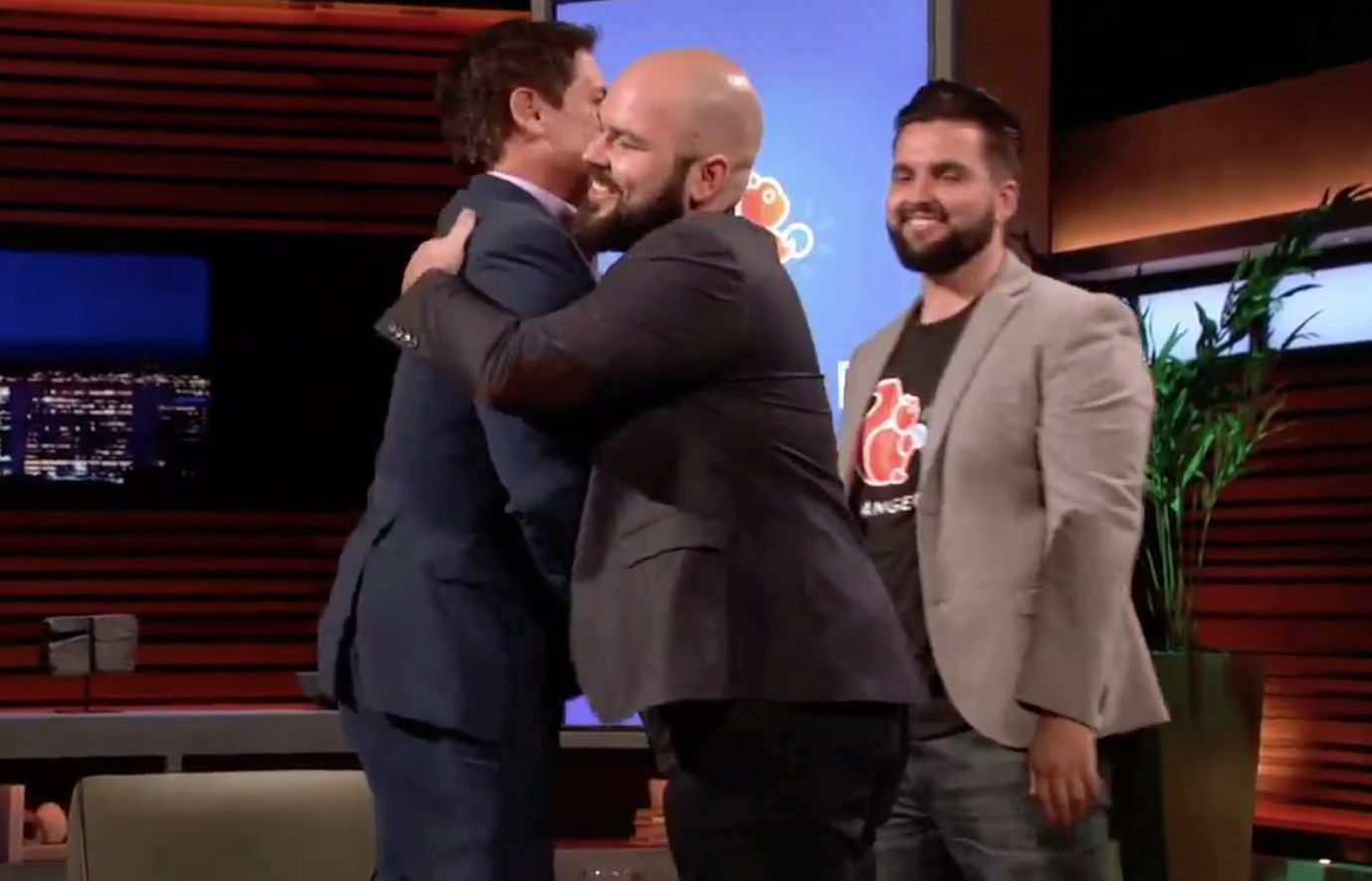 Revealing more about their future plans, Nick says that they intend to use some of the money to develop an Android app. With prompting from Robert, Mark soon makes them an offer—$250,000 for 25% of the company. Nodding in acknowledgement, the brothers take a moment for themselves, before trying their luck at a counteroffer. To their chagrin, however, Mark tells them there is no wiggle room in his offer.

Revealing that they had always wanted to work with Mark, partly due to his tech background, Nick and Dan soon accept. Seconds later, they exchange handshakes and brief hugs, before they walk backstage. Excited about the opportunity to work with Mark, the brothers are nothing but smiles in the subsequent interview.

ChangEd in 2018 – The After Shark Tank Update

Many months have elapsed since Nick and Dan pitched their money-saving app on Shark Tank. How is the company doing nowadays with Mark’s investment? Let’s have a look.

Within a week of their Shark Tank appearance, ChangEd gained tens of thousands of downloads on the app store. Not only that, their user base has also nearly quadrupled― which is quite a feat in itself. Altogether, it’s said that they’ve helped their users to pay more than $250,000 towards student loan payments.

In terms of the company’s next steps, the founders have revealed that their main goal now is to grow their user base. To help with that, it’s said that they will soon be releasing a Friends & Family feature, which will allow friends and families to pitch in and help with a user’s student loan.

As mentioned on the Shark Tank episode, they are currently also working hard to come out with an Android version of the app (which is currently in development as we speak). For the latest news, you’ll want to check out their official website or Facebook page.

What Users Think of the App

As of July 2018, the ChangEd app has a 3.3-star rating on the app store, out of nearly 100 reviews. Reading through some of the comments, it would appear that most users are pleased with the features. For those who have run into issues, the company is also quick to respond.

Since their appearance on Shark Tank, the company’s web presence has seen significant growth. For instance, they’ve gained more than 1,500 followers combined on Facebook and Twitter. Not only that, but the founders have also been interviewed by a few sites such as Forbes and Guardian Bikes.

Will we be seeing the brothers back on the hit show for an update anytime soon? Regrettably, it’ll probably be a while before we see then back on television. If anything, they’ve been kept busy with the recent developments of the app.