What Happened to the Turtleman? – 2018 Update 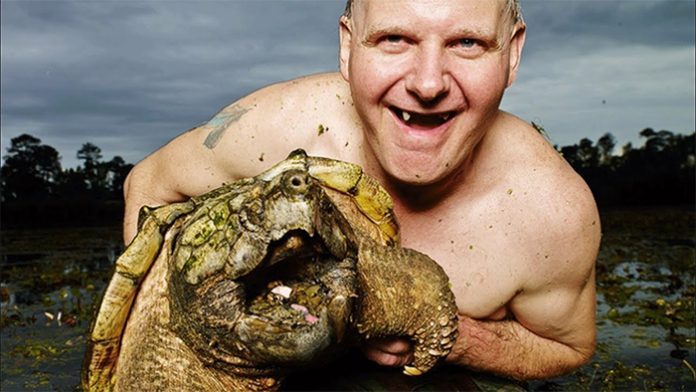 Ernie Brown Jr. aka “The Turtleman” owes his nickname to the fact that he is able to catch snapping turtles bare-handed. A reality star, he is best known for starring on the Animal Planet’s Call of the Wildman, a series that premiered in 2012. Incredibly popular, the show attracted over 1.6 million viewers at the peak of its popularity during the second season.

In the end, Call of the Wildman continued for two additional seasons, for a total of four seasons, before wrapping up in 2014. What led them to cancel the show? What has the Turtleman been up to since then? Has he appeared in any other TV programs? What has he been busy with over the past few years? We’ll be addressing some of these questions below—be sure to stick around if it’s something you’re interested in!

What Happened to the Turtleman? 2018 Recent Updates

Despite being one of the most watched programs on the Animal Planet, Call of the Wildman was not renewed for a fifth season. According to reports, the reality show, which follows the antics of the Turtleman, came under intense scrutiny after it was revealed that a number of animals including zebras, raccoons, and coyotes, were mistreated and neglected during its production. Outraged by the revelations, fans eventually started petitions, calling for the series to be canceled. Not only that but federal and state investigations were also launched.

In the end, Animal Planet announced that they would be canceling the series in 2015, citing “a lack of popularity among viewers.” In a later statement, they revealed that the decision had come from the fact that Call of the Wildman “had not been resonating with audiences.” Clarifying, they reiterated the fact that there were no plans to return the show to the schedule.

Three years after the allegations, it was announced that the producer of the series had been given a hefty fine from the U.S. Department of Agriculture for “exhibiting animals without a license”, a process that led them to suffer. To the dismay of animal advocates, however, the case was settled for a mere $1,400 even though he faced up to $100,000 for the violation.

What has the Turtleman himself been up to since then? Inevitably, he had also received criticism for his mishandling of animals in the series. In addition to having “tormented a coyote” by lifting and dragging the animal by the tail in one episode, individuals have also pointed out that he has tossed a porcupine and wrestled a raccoon on the show.

Still, he has his share of fans. As far as we what he’s been up to lately, he recently launched his own YouTube channel in 2017. The “home of all his new adventures”, a number of videos (many of which are non-animal related) have been uploaded over the past year. As of 2018, some of his most popular uploads include Turtleman vs Moonshiner Josh (364,000 views), Turtleman Hits the “Turtle Jackpot” (138,000 views), and Turtleman Catches a Snake at the Zoo!! (29,000 views). For those who’d like to subscribe to his official channel, you can do so by clicking here.

In terms of other endeavors, he has also been working on a “live action comic book” over the past little while. Still in the works, as we speak, interested parties can sign up for updates on his official website.

Want to keep up with the former reality star? If so, why not follow him on social media? You can find the Turtleman on Twitter at @turtleyaya or on Instagram at @Turtlemantribe. Alternatively, you can follow his official Facebook page for the latest updates here.

More About the Turtleman

Born on March 28, 1965, in Washington County, Kentucky, Ernie Brown Jr. aka “The Turtleman” caught his first snapping turtle at the age of seven, after being taught how to do so by his father and uncle. By the time he was twelve, he had caught a 50-pound turtle with his bare hands; though he offered it to the local zoo, they ultimately refused as it was too big.

Turning his childhood hobby into a career, he eventually began to catch turtles professionally. Despite having being bitten several times, he remains passionate about the profession. Allegedly, he has pulled more than 12,000 turtles from the waters throughout his career.

In 2011, he landed his own reality series on Animal Planet after one of his turtle-catching videos went viral on YouTube. Titled, Call of the Wildman, the show premiered in the U.S. on October 30, 2011. Almost immediately, the series proved to be popular among viewers, who were in awe with his abilities.

In the end, the program ran for over 70 episodes across four seasons. Following allegations of animal mistreatment, however, the network canceled the show in 2014. While the Turtleman hasn’t returned to television since, he has launched his own YouTube channel, which he updates on a regular basis.