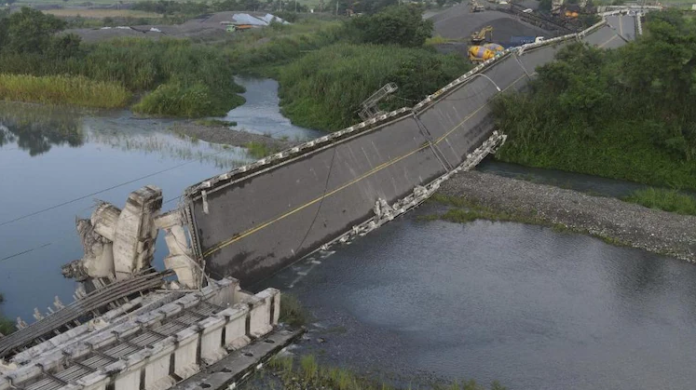 A 6.8 magnitude earthquake hit rural southeastern Taiwan on Sunday, September 18, causing many buildings to collapse. The Gaolio Bridge, an iconic landmark in the area, also cracked, twisted, and collapsed. The remnants of the bridge—snapped cables and twisted pieces of metal—can be seen in a clip shared by CNN on social media. Fortunately, the island’s semiconductor facilities are unaffected.

The United States Geological Survey had initially registered the earthquake at 7.2, before downgrading it to 6.8.

According to the island’s Central News Agency, four individuals were rescued after being trapped under the debris of a building. A train also derailed in the area but fortunately, there were no casualties; all 20 passengers were safely evacuated. Rescuers also saved four people from a convenience store after a low-rise building collapsed on it.

Approximately 110 soldiers have also been deployed along Taiwan’s eastern coast, to help with disaster relief efforts.

Taiwan’s Central Weather Bureau later reported that there has been at least one death—a 69-year-old cement worker who was killed after piles of material fell on him—and several dozen injuries.