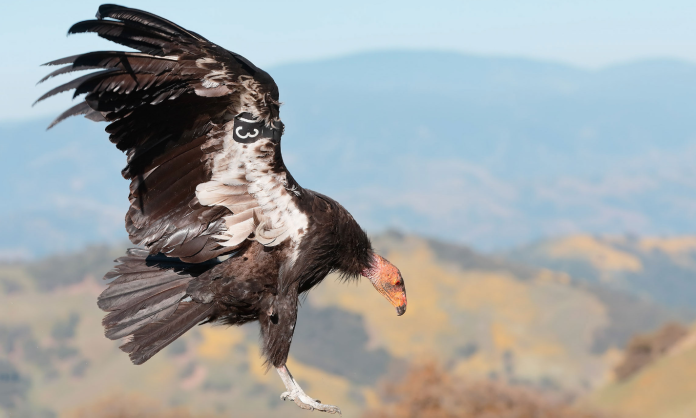 The California condor is the largest bird in North America. They’re Black in color, they have white patches under their wings and a distinctive head and neck that’s bare of feathers. If anything, that’s what sets them apart from other broad-winged birds. From tip to tip, their wings can span up to 10 feet.

As if that wasn’t impressive enough, they can soar as high as 15,000 feet by gliding on air currents; this allows them to travel widely to feed on carcasses of various animals such as cattle and deer. They’re also one of the longest-living birds in the world, with a lifespan of up to 60 years.

Despite that, numbers have declined significantly since the 20th century. In fact, they’ve been critically endangered for many decades. This is mainly due to the use of DDT, habitat destruction, poaching, and lead poisoning. The fact that they don’t reach sexual maturity until the age of six doesn’t help either (they also have low clutch size – just one young per nest). To help preserve their numbers, the U.S. government put together a conservation plan in the late 1980s. As part of the plan, all remaining wild candors were caught (there were 27 in total); this led them to be extinct in the wild in 1987.

These surviving birds were brought to the Los Angeles Zoo and the San Diego Wild Animal Park, where they were paired and bred. As a result, numbers began to rose. By 1992, they had begun to release these giant birds into the Los Padres National Forest in Southern California.

As of 2022, there are more than 500 birds in the wild and in captivity. Just two years ago, they were spotted in Sequoia National Park for the first time in nearly 50 years. Still, they’re considered to be one of the rarest birds in the world.

On May 3, 2022, two captive-bred condors were released about an hour away from the Oregon border. This was the first time that these endangered birds soared the skies over the northern coast redwood forests in more than a century. According to reports, the two condors had been transported to a staging area in the morning. A remotely controlled gate was later opened, which allowed them to go out.

The birds allegedly eyed the opening for a few minutes before spreading their wings and flying off. The plan is to release two additional condors after experts determine whether or not the released condors are displaying appropriate behaviour. The condors, including three males and one female, are between two and four years old. Two were born at the Wood Centre for Birds of Prey in Idaho and two were hatched at the Oregon Zoo.

How Can We Help With Their Comeback?

More than half of condor deaths are due to lead poisoning, according to the director of global conservation, Chris Parish. And they’re not getting killed by bullets; they’re getting poisoned because they’re literally eating lead (it’s what most ammunition is made of). After all, they’re scavenging birds—they only consume animals that are already dead, including those that have been killed by hunters.

The problem is that when a human kills an animal, they often leave behind tiny fragments of lead. Ultimately, it’s this lead that’s responsible for poisoning the birds.

The good news is that this problem can easily be prevented by switching to non-lead ammunition such as copper bullets. In fact, that’s Parish’s goal—to convince hunters to use a different type of ammunition. Hopefully, by doing that, instances of lead poisoning will go down, which will allow condor numbers to go back up.