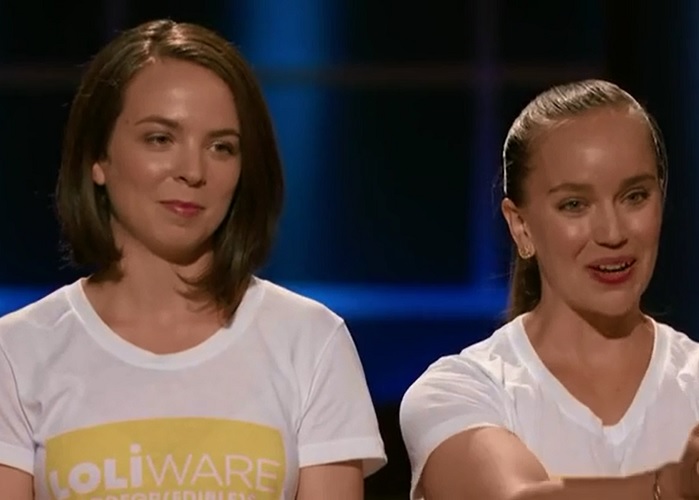 Chelsea Briganti, originally from Honolulu, Hawaii met Leigh Ann Tucker while attending the prestigious Parsons School for Design, in New York City. After the pair graduated in 2010 they entered a Jell-O competition, but instead of producing just another decorative mold, they developed something truly original. The entrepreneurs were both wildly passionate about the environment and sustainability, and they combined the passion they felt about the subject with their design skills and produced a disposable drinking cup, that was not only 100% biodegradable, but it was completely edible too.

The idea dominated the competition, and the pair began to receive interest in the concept from large retailers and the drinks industry. They took the idea to Kickstarter in order to turn the concept into an actual product, and the crowd-funding community answered the call. The $10,000 goal was achieved by January 2011 and setting up the manufacturing process became Chelsea and Leigh Ann’s next goal.

The final product was made with a plant-based gelatin called agar, which was not only semi-translucent and sturdy enough to drink from, but it was also vegan-friendly, and completely biodegradable, or ‘Biodeg-edible’, as the company tag-line put it.

Chelsea and Leigh Ann came to the Shark Tank in October 2015. They were seeking a $150,000 investment, in exchange for 10% of the Loliware business.

The pair began their pitch by announcing that they had designed an entirely new product category. The sharks looked doubtful initially, but as Chelsea explained the unique function of the Loliware cup, along with its added environmental benefits, they began to look impressed.

Leigh Ann revealed that the Loliware cup was just the beginning, the company had plans to extend its products to include a range of other items, and the possibilities were endless. She asserted that the Loliware business was beginning a ‘plastic free revolution’ and aimed to make the World a less polluted place by getting people more excited about sustainability.

The pitch ended with some drinks being handed out to the sharks, all contained within Loliware cups of course, and the sharks were quick to try out the taste for themselves.

Lori Greiner was highly impressed, she thought the cup was ‘Delicious’. Kevin O’Leary was less enthusiastic, commenting that his tasted like ‘liquorice’, but he didn’t disclose whether he thought that was a good or bad thing. Chelsea disclosed that Yahoo Food had covered the Loliware Cups, and had described them as ‘An adult fruit roll-up’, she explained that all of the flavors came from natural fruits and vegetables.

Barbara was intrigued, she inquired what sales had been made by the business so far. Chelsea explained that the business had only been operating for three months, but had already achieved $110,000 in sales in that short period. Leigh Ann revealed that Loliware had also just been approached by a large event management company who wanted to sign a $1.3 million deal with the company, to supply Loliware cups for all of their events in New York, and in addition, the business was about to sign a deal with a large food distribution company.

Lori asked where the original idea for the cups had come from. Chelsea explained to the sharks about the original Jell-O competition, and the concept of the cups being not only original and innovative, but also improving sustainability. They made a big impression in the competition, but the idea had suddenly gone viral on the internet. Within a week of the competition being held large companies were trying to place orders for the cups, one order was for 60,000 units alone.

Mark Cuban asked the entrepreneurs how much funding the start-up had raised so far, Leigh Ann explained that the pair had originally invested about $110,000 in the company, they had another investor who had committed to investing $100,000, and the company was currently in the middle of a $1,000,000 round of fundraising, with another $600,000 still to be raised.

Robert Herjavec admitted that he loved the cups, and was interested in making a deal, but he told the entrepreneurs that he would like to get more than 10% equity in the business. He suggested that he could potentially be interested in supplying the entire $600,000 funding that the pair were seeking to raise, as long as they were prepared to offer him a suitably increased stake in the business.

Mark Cuban perked up at Robert’s comment. He quickly expressed his own interest in joining the deal. Robert confirmed he would be happy to share with Mark, and things seemed to be coming to a satisfactory conclusion for all parties. Chelsea and Leigh Ann looked overjoyed at the developments and Chelsea, slightly overwhelmed, suggested that they could offer 25% equity in exchange for a $600,000 investment.

Robert Herjavec was about to respond to that, but Mark Cuban quickly interrupted before he could get a word out. ‘Done’ said Mark, to Robert’s bemusement. Chelsea was quick to tell the sharks that Loliware would be pleased to partner with any or all of them, Kevin O’Leary took the opportunity to register his own interest, asserting that he too would like ‘A piece of that’.

Barbara Corcoran wasn’t going to be left out of the Loliware action and quickly indicated that she too would like a be involved. Mark Cuban was keen, however, to gain himself a bigger slice of pie. ‘Why don’t you let me choose who comes in?’ he asked Chelsea, who looked momentarily uncomfortable at his predatory tactic, but the other sharks had plenty to say about that.

‘No’ commented Robert, ‘It was my idea’ he quickly pointed out. Barbara also objected to Mark’s ploy and the Texan gave her a slightly sheepish smile, as he realized that things weren’t going to go his way that easily, not on this occasion at least.

The sharks began arguing amongst themselves, all trying to win the Loliware deal. Mark opined that the deal would be best shared between only two sharks, and Robert agreed. The pair looked on the verge of closing the deal there and then, but Barbara was determined to say her piece.

She told the entrepreneurs that of all the sharks, Mark Cuban had more money than all the other ‘Little men’, and she would prefer to partner with him above all others. Robert quickly asserted that he too had no problem working with Mark, and reminded Chelsea that his offer of $600,000 for a 25% stake still stood, and was a ‘Real offer’. He asked the pair ‘Do we have a deal?’ in another attempt to close the negotiations, but once again Barbara was not going to let him win without a fight.

She asserted that Chelsea and Leigh Ann would be ‘Crazy’ to even consider a deal that didn’t involve her. She told the pair that they could phone any of her previous partners to confirm what a great partner she would be, but Kevin was quick to point out that all the sharks had partners who would sing their praises.

The banter of the sharks moved rapidly through another few combinations of sharks and partnerships. Kevin O’Leary suggested that he, Lori and Robert could provide three shark partners, but Lori, alone amongst the sharks, was not interested.

She told the Loliware pair that she liked the company, and she liked them, but she didn’t share their vision for the future of the business. Lori saw Loliware as a ‘Party thing’ and wasn’t going to be joining a deal with another shark. Lori was out.

Robert asked Mark Cuban if he was going to partner with him or Barbara. Mark confirmed he could work with either of them equally well. Robert, in turn, told the entrepreneurs that he didn’t want to partner with Barbara or Kevin, and finally, the battle of the sharks seemed to be coming to an end.

Kevin summarized the deals available, there was $600,000 for a 25% stake, to be shared between Mark and Barbara, or there was the same deal, but with Robert Herjavec alone. Although he had expressed an interest previously, he didn’t mention it now. Kevin may have been interested in a deal, but the other sharks didn’t want to share with him.

Chelsea and Leigh Ann held a quick whispered conference, and seemed to finally make a decision, they confirmed they would love to partner with Mark and Barbara, and the successful sharks stood up to shake on the deal.

‘Tough’ remarked Kevin, philosophically, while Robert Herjavec appeared to be devastated by the final result.

Loliware Now In 2022 – The After Shark Tank Update

The company was offered a deal from two sharks—Mark and Barbara. While it was ultimately finalized, it looks like the latter is no longer involved with the business.

That hasn’t stopped them from taking things further, however. Not long after appearing on the show, a large nutrition firm approached the company about developing a line of products using their technology, which they accepted. They later revealed the Lolivita—a vitamin-infused cup that’s designed for dietary supplements—at the IFT show in Chicago. They also planned on developing an energy cup, an electrolyte cup, and a protein cup.

However, customer reviews were mixed at best. As a result, the company turned to biodegradable straws instead as a proof of concept for their seaweed-based technology. They subsequently raised $1 million, which allowed them to put the new product into development. Not only that, but the company also tested the waters with a crowdfunding campaign.

By January 2018, they had successfully raised more than $49,000 on Kickstarter with over 1,000 backers and $73,000 on Indigo. These additional funds would allow the company to speed up the production process. However, things didn’t go as smoothly as planned. In the end, the company didn’t post any updates for many months, which left many of the backers wondering what had happened to the project (and their money).

In March 2019, the company finally announced that the Loliware Straw had launched and that they would be shipping out orders ASAP. However, many of the backers did not receive the straws, according to the comments page. Some even questioned the shipping process as they were never asked for their addresses.

Fast forward to 2020 and the company received an additional $6 million from Hatzimemos/Libby, a New York-based venture capital firm. As far as we can tell, however, the Loliware Straws are no longer available for pre-order. In fact, the entire production process seems to have been halted. If anything, this only makes the situation worse as many backers still have not yet received their straws. According to the company’s representatives, however, all orders have been shipped.

As of 2022, the company has shifted to selling direct to businesses instead of direct to consumers. They’ve also launched a “Blue Carbon” straw, which “symbolizes the critical role seaweed plays in tackling climate change.” However, it’s only available to businesses; it’s not possible to purchase the straws for personal use.