Tom Sanetti, from Huntington Beach, California, represents the Earth Log fire products, and has come to the Shark Tank to seek an investment of $160,000 in exchange for 20% in his fast growing business. Earth Log manufactures a “fuel log,” a log intended to kindle and start a fire, which is a very popular concept, but it is far more different than any of the typical logs available on the market. Earth Logs are made using 100% recycled resources, burn up to 3 times hotter than wood, produce less smoke, and the smoke that is generated actually smells quite pleasant. There are three Earth Log products on the market; the original Earth Log fire log, the citronella Earth Log, and even the Earth Log Bonfire Block.The motto at Earth Log is simple, “More heat, less smoke, great scent.”

Kevin starts the segment off by saying that he’s a huge customer of products like the Earth Log, as he buys about 10 cases of fire starting logs from Costco. However, he isn’t brand-sensitive and finds them all the same, so he asks how Tom differentiates the Earth Log from all the other fire logs that do the same thing. Despite Tom’s answer that the Earth Log smells far better, Kevin points out there is no way for the consumer to know what it smells like. Even as a viewer of this presentation, I wonder if Tom would even be allowed to burn an Earth Log so the Sharks could really smell for themselves, but Kevin has a point; the average consumer won’t care enough if they are walking down the aisles of Costco in search of a fire log.

Tom then admits that he needs help with marketing the most, and that is why he has come to Shark Tank. Marketing is his biggest issue, and because of this, Earth Log has very limited distribution in its current state. He then passes out samples of the Earth Log to each Shark, complete with the packaging. Lori mentions that the Earth Log does smell good, and represents a very pine or forest-y scent. She then asks the market price, and Tom says that a case of six costs around $22, while the competition costs about a dollar more per log. There are, in fact, other Earth-friendly fire logs in the market that are directly competing with the Earth Log. None of them are scented, though.

Tom then reveals that the Earth Log has around $200,000 in sales, over a 4 year period, but Tom clarifies that he didn’t initially start Earth Log as a for-profit for business. Daymond focuses on the last year in sales for Earth Log, which came out to $50,000 in the last year, and while Tom understands that the number sounds bad, he points out that in the year 2013, the summer just before the filming of this episode, California had its hottest summer and coldest winter ever, and sales suffered because of this – people weren’t up to having fires outside, and at this point, Earth Log also had very poor manufacturing and wasn’t as widely available as it is now.

Tom started out Earth Log manufacturing the logs in his kitchen, just for himself and his friends for personal use, and his friends suggested that he take the logs to a market and Tom did so. That market sold out of 500 prototype Earth Logs in a week, and then Tom began to hop from market to market; he would sell more at each market, and eventually got to the point where he was pressing them in a barrel to make a set of six at once.

Kevin explains that Earth Log is a commodity business, and there are a variety of competitors that take up 80% of the market. The big two, however, are Costco and Home Depot. Kevin then asks what happened when Tom take Earth Log to those two stores, and Tom points out that, as a fan of Shark Tank, Mark Cuban is famous for saying, “Nobody doesn’t return my call.” In comparison, Tom is a nobody, and received no return phone call from any of the bigger stores that he went to. Despite going into local Home Depots, the local management suggested Tom go to Atlanta, Georgia to meet with the higher-ups who could really place the orders for Earth Logs. Costco also supposedly wants to bring Earth Logs into their stores, and offered Tom a 4-store deal.

However, Tom has refrained from signing the deal with Costco because manufacturing is his chokepoint – while he would love to accept the deal, he just does not have enough to make the deal happen. Kevin points out that Tom should focus on one major retailer, and then Tom removes a letter of intent from one of the country’s largest grocery store franchises, Albertson’s. The letter of intent means that Earth Logs will be brought to 180 of Albertson’s stores, assuming that Earth Logs finds the manufacturing in order to keep up with demand. The number of stores could have been far higher had Earth Logs been manufacturing enough of the logs in order to meet the initial order, but they intend to push the product out to 3,200 store.

Vaughn’s Pavilions, a home improvement and craftsmen store in the same vein of Home Depot, also showed strong interest in ordering the Earth Log. They intended to order 22 trailers of the product, but Tom had to decline since he did not have the product. Nick Woodman, tonight’s guest Shark on Shark Tank and founder of the GoPro, asks Tom for his solution to this problem. This is exactly why Tom has brought Earth Logs to the Shark Tank – to seek investment to build the machines to increase manufacturing to meet the demand. The machines do not currently exist, but there is a patent pending on the machine design which will allow Tom to mass produce more of the logs. 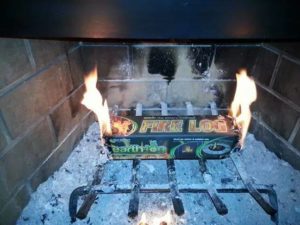 The main difference between Earth Logs and the other fire starting logs, besides the scent, are that other logs are made with sawdust and “slackwax” – slackwax is a flammable, smelly wax that binds the sawdust and forms the brick shape. However, Mark steps in and points out that Earth Log is not quite ready to be a company yet, as it is still more of a product. Tom still has some work to do in order to make Earth Log into a full-fledged company, but to invest an investor’s time and the investor’s team time into something other than phone calls would be a lot of work. Mark is also out.

Nick agrees with Mark, saying that there would be a lot of work to build the brand around Earth Log. As the founder of GoPro, the team of 8 people realized that they had a huge opportunity, but didn’t understand the importance of building a brand and how to go about the process of building a brand. They started with small retailers to build a brand and build an organization, and when Best Buy called, they were ready to fulfill those orders. Nick is also out, since Tom still has so much work to do.

Daymond concedes the same points as what Mark and Nick made; it is just too early for an investor to tie up his money, and he is also out of the deal. Kevin also agrees, giving the example of when he was forming his own company out of his basement. However, he is an investor, and is not looking for someone else that will be willing to work full time – he just wants to let his money work for him, while he sits on the dock with his toes in the water. Since time is money and his time is better spent investing his money and not working to build up the Earth Log brand, Kevin is out.

Lori is the final Shark remaining, and she says that Earth Log reminds her of a product called “Screen In.” Screen In was initially started out of a garage, and with Lori’s investment, they increased the sales to $1 million dollars in just a year. She loves everything about Earth Log, and she will extend an offer – but it’s a realistic offer, since she knows the amount of work involved in taking Earth Log to a point where be able to manufacture enough of the product to go to large retailers. Her offer is $160,000 in exchange for 35% of the company.

Tom accepts the deal without hesitation, finding the investment of $160,000 in exchange for 35%. There is no bartering or haggling, and Tom walks right out of the Shark Tank. On his way out, he mentions “Chicks dig Earth Log.”

The company saw a huge increase in sales after appearing on Shark Tank. The Earthlog was also made available at various retailers including Walmart, TJ Maxx, Home Goods, and Home Depot for approximately $3.99.

However, the deal with Lori never went through, according to a video that Tom posted on Facebook. Allegedly, the two had disagreed with the manufacturing process; Tom had wanted to keep making the Earthlog in the US (his company was called American Green Products after all) while Lori wanted to move things to China to lower the costs.

But that didn’t stop him from expanding the company. After a while, he created a new product called the citronella log, which was designed to keep mosquitos away for hours at a time like the original Earthlog, it’s made from 100% recycled materials and used non-toxic citronella oil that’s eco-friendly for the earth.

At some point in 2018, however, the company shut down. There was no announcement made whatsoever, the website just went dark. Seeing as how it hasn’t come back, the most logical conclusion is that they’ve decided to shut the business down.

Prior to that, the Earthlog had a 3.6-star rating on Amazon. While many customers were satisfied with how the logs worked, some were disappointed by how difficult they were to start and how quickly they burned. Others were put off by the rose scent. Several people also mentioned that the price is expensive.

As of 2022, their official Facebook page is still up, but it hasn’t been updated since August 2018. The same goes for their Twitter account—it appears to be abandoned. Also, their Instagram account has been taken down so their social media presence is pretty much gone.

What’s interesting, though, is that Tom Sanetti is still the CEO of American Green Products, which is still active, according to his LinkedIn page. Perhaps he just hasn’t gotten around to updating his profile? Who knows, but one thing’s for sure – it doesn’t look like Earthlog is coming back anytime soon. After all, it’s already been four years since the website went down. If they planned on coming back, they probably would have already done so.

In terms of why the company shut down- we might never get the answer. Seeing as how the deal with Lori fell through, however, they might have very well run into some financial issues, which prevented them from continuing the company. That’s our best guess, anyway.