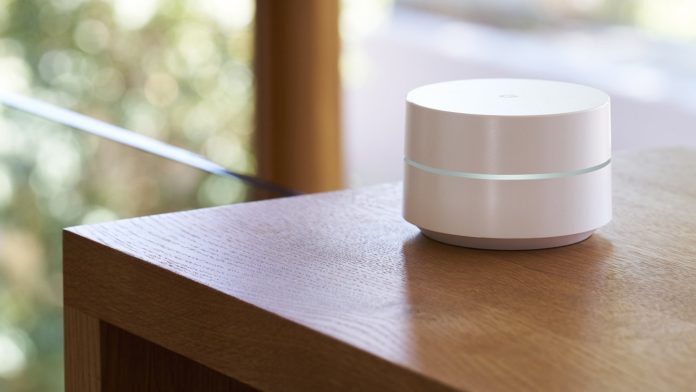 If you’re someone who uses the Internet a lot, then internet speed is something that you care a lot about. However, obtaining prime internet speed can be a huge hassle. First, you have to negotiate with your internet service provider to make sure that you’re getting the package that you want. Then it’s a matter of setting up routers, range extenders, powerline adapters, and computers in such a way to where everything is just so. Once you have something set up it isn’t much of an issue, but that first set-up can be a massive pain in the neck. Luckily, someone has come along with a proposed solution to that problem.

Google Wifi is the latest product from Google that promises to make your home life just that much easier. Essentially, it’s a router that does the job of a standard router in a significantly more efficient way. Google is advertising this device as something that will effectively replace all of the hardware that you use to get wireless internet configured in your home. Say goodbye to all of your range extenders and adapters.

What is Google Wifi, anyway? In this article, I’m going to work to answer that question and many others. I’ll discuss what exactly it is that this router does, while also being sure to give my opinion as to whether or not it is worth what it costs. Without further ado, let’s take a closer look at this new Google product.

Note: Also be sure to check out our Google Wifi vs On-Hub Comparison Article! 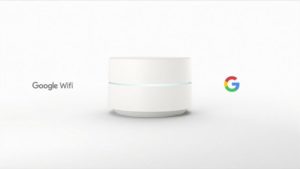 Google Wifi is being marketed as a coverage system, which is a good term for it. If you judge this device based upon its appearance, you may not be too impressed. It features a simple, sleek design that could be seen in just about any other home. However, its hardware and software is where it really shines. Google Wifi is is a router replacement, while also being a router itself. Allow me to explain. Each unit that you plug in will basically act as its own router. By strategically placing these small hockey puck shaped devices across your home, you can essentially blanket your house in a strong, stable wireless Internet signal. Even better, Google is able to treat each of these “separate” routers as one, which makes it to where you don’t have trouble with devices switching from signal to signal as you travel from room to room. 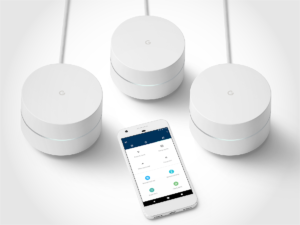 You may be thinking that this model already exists. With a wireless range extender, you can just plug something into the wall, configure it, and have it extend the range of your one router. However, the range of those extenders aren’t always very good. Not to mention, the signal that it sends back out is typically at a much lower bandwidth than the original signal that it received. By creating a device that functions both as a router and as a range extender (in a sense), Google has created the ultimate wireless device. Google Wifi is also a very smart product, in that it manages a lot of its functionality on its own. The router automatically places your connected devices to the least crowded channel. The router automatically uses the correct band with the correct wireless band. The router automatically connects your device to the nearest point. Basically, it does a lot of the hard work for you.

How well does the Google Wifi actually work?

It’s one thing to make all of these spectacular promises, but it’s another thing to actually deliver on them. This Google product has yet to actually, but many reviewers have already gotten their hands on advance models. As it turns out, the Google Wifi does everything that it says that it’s supposed to do. The device is easy to use, easy to set up, and incredibly effective in increasing internet speeds. A lot of the time, people will purchase an internet speed with their internet service provider, and when the actual performance that they receive falls short, they’re resigned to it. Everyone knows that the upload and download speeds that you’re being given are technically “up to” numbers. You’re not guaranteed that performance, but that’s as high as your performance can go. With Google Wifi, those “optimal” speeds become much more within reach. This is a product that, when configured properly, allows you to wring every drop of performance out of your modem. 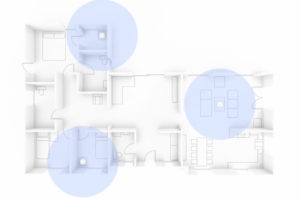 One of the stranger aspects of Google Wifi is its lack of customization. If you’ve ever tried to tinker with your own wireless router, then I’m sure you know how it feels to experience that moment of extreme satisfaction when you tweak its settings just right. This device doesn’t really have anything like that. When you work with your router through the Google Wifi app, you’re basically getting a helper. You can configure the network to different smart devices, customize passwords and admin privileges, and visualize how well your set-up is actually running. There isn’t a whole lot of technical work to be done here, which is a double-edged sword. On one hand, it takes away a certain degree of customization, but on the other hand, it makes Google Wifi much easier to use. Overall, when you look at the design and the functionality of this thing, it’s definitely meant to be something that you set up once and forget about for a long time. Whether or not that’s something that you find desirable is ultimately up to you.

Is the Google Wifi worth it?

A single Google Wifi unit usually costs $129, which is actually pretty competitive as far as top-tier wireless routers go. A single point is advertised to cover around 1500 square feet, which is big enough for most people. The single pack comes with a point, a power adapter, and an Ethernet cable. If you’re looking to cover a larger area, then Google is also selling a three-pack system which you can usually get for under $300. This pack includes 3 points, 3 power adapters, and an Ethernet cable. The idea of spending $300 on a wireless internet set up can certainly seem intimidating, especially once you start doing the math and considering how much more inexpensive it would be to just buy a regular router and hook up some powerline adapters or range extenders or something similar. That said you can check and see if there are any discounts available at Amazon.com by clicking here. 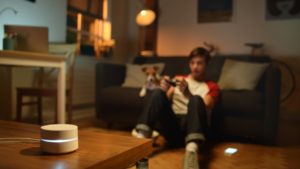 However, I can’t stress enough that that line of thinking doesn’t make any sense when you’re dealing with Google Wifi. This is something that has honestly never been created before, and although you may be able to Macgyver that functions in a similar way, I really don’t think you’ll be able to create something that creates this exact experience. If you care a lot about Internet speeds, and if you are dissatisfied with the convenience or performance of your current set-up, then I think that you will get a lot out of Google Wifi. Even if you’re on a tight budget, I still think that a single unit would go a long way. In this day and age, internet speed is important in almost every household, and so I think that this product has some kind of place in almost every household.