Since being brought into the public eye in 1998, Monica Lewinksy has reinvented herself a couple times. When America first learned her name, as the woman who Bill Clinton had an “inappropriate relationship,” she became the unwilling figurehead of political misconduct and abuses of power. She attempted to turn her scandal celebrity into a marketing tool for the next few years, with her own line of handbags and a stint as a Jenny Craig model.

Then in 2005, Lewinksy tired of the inescapable public eye, and moved to London to study social psychology. It was almost a decade later when she reacknowledged the Clinton scandal. In 2014, she  wrote an essay for Vanity Fair about the affair, and later that year started speaking against cyberbullying. Since then she’s continued to raise awareness of online harassment.

In 1995, at age 22, Monica Lewinsky graduated from Lewis & Clark College in Portland, Oregon, with a BA in psychology. That summer, she was hired for an unpaid summer internship in the office of the White House Chief of Staff, so she moved to Washington, D.C. That December, Lewinksy moved to a paid position at the White House Office of Legislative Affairs. 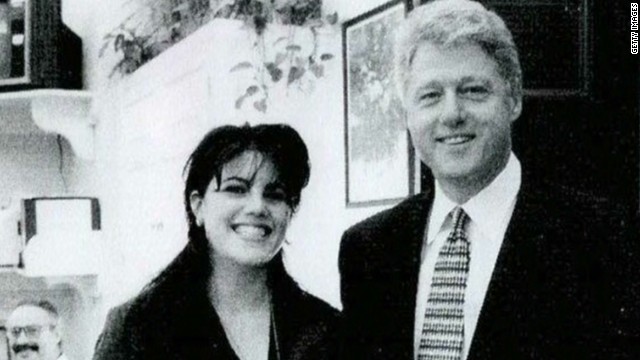 Between November 1995 and March 1997, Monica Lewinsky had multiple sexual encounters with then-President Bill Clinton. She was transferred to The Pentagon because her superiors were uncomfortable with her closeness to the President in April 1996, though at that point it wasn’t known he was having an affair with her. In September 1997, Monica Lewinksy’s coworker began recording phone calls when Lewinksy was talking about her affair.

Eventually, those tapes would make there way to a lawyer looking into the Clintons for possible real estate fraud. In January 1998, news of the Clinton-Lewinsky relationship went public, and on January 26, Bill Clinton said, “I did not have sexual relations with that woman.”

There were various confusions related to the nature of their relationship, mostly rising from Clinton’s limited use of the phrase “sexual relationship” and pedantry related to verb tense. After Bill Clinton was impeached, subsequent hearings acquitted him on charges of obstruction of justice and perjury, effectively putting an end to the matter.

Lewinsky After The Scandal

Because of the immunity agreement Monica Lewinksy took in exchange for her testimony, she was limited on what aspects of the affair with Clinton she could discuss. However, she was able to cooperate with the writer of Monica’s Story, a biography about her published in March 1999. Also in March, Lewinsky was interviewed by Barbara Walters for ABC’s 20/20. She also appeared as herself in two Saturday Night Live sketches on May 8, 1999. Later that year, Ms. Magazine published a series of articles discussing whether the Lewinsky scandal, specifically Monica Lewinsky’s behavior, had any meaning or impact for feminism.

After learning to knit due to the stress of the media attention and legal investigation around the scandal, Lewinsky began selling handbags bearing her name. She designed the totes, which were sold in New York and London.

Early in 2000, Lewinksy also began appearing in TV commercials to promote the diet company Jenny Craig. However, there was immediate controversy about using her as a spokesperson, and the company ended her contract early, paying her under a third of what she had been scheduled to earn.

When the terms of the immunity agreement governing her speech expired, Monica Lewinsky appeared in an HBO special, “Monica in Black and White,” as part of the America Undercover series. The special aired first in March 2002. In 2003, Lewinsky was briefly cast as the host of reality dating show Mr. Personality, however ratings fell amid controversy over her capitalizing on her fame. Also in 2003, Lewinksy appeared on The View and Jimmy Kimmel Live!

When Bill Clinton published his autobiography My Life in 2004, Lewinsky did an interview with the UK tabloid Daily Mail. In it, she criticized Clinton for not acknowledging that the interest in a sexual relation was mutual. Then, in 2005, she moved to London, desperate to escape the negative press.

While in London, Monica Lewinsky studied social psychology at the London School of Economics. In December 2006, she graduated with a Master of Science; her thesis had been “In Search of the Impartial Juror: An Exploration of the Third-Person Effect and Pre-Trial Publicity.”

It wasn’t until May 2014 when Monica Lewinsky tried to re-establish her public presence. An essay she wrote titled “Shame and Survival” was published in Vanity Fair, where she continued to maintain the mutual and consensual nature of her relationship with Bill Clinton. The essay was a finalist for the 2015 National Magazine Award. While she acknowledged that Clinton did use his political clout to motivate the relationship, she held herself in equal responsibility for the encounters. In July, she was interviewed for a National Geographic special, The 90s: The Last Great Decade. 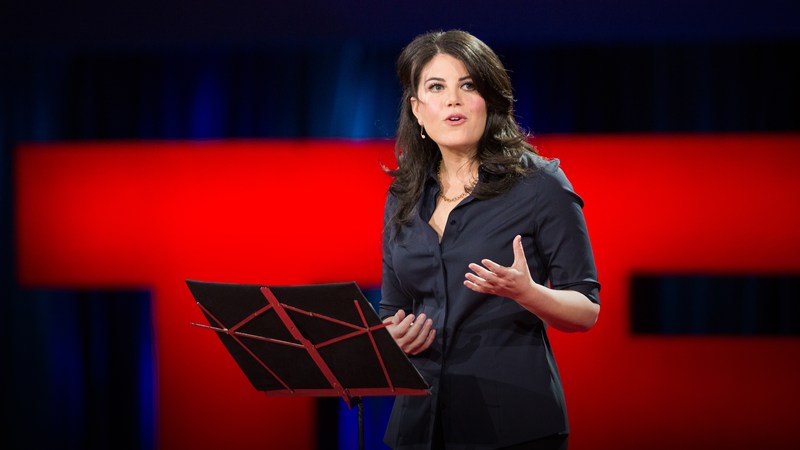 Monica Lewinsky delivering her TED Talk, “The Price of Shame”

In October 2014, Lewinsky, having contributed all she could to the narrative around her own life, refocused her efforts against cyberbullying, a highly prevalent form of public shaming. She spoke about the Internet backlash against her for Forbes’ “30 Under 30” Summit, and in March 2015 delivered a TED talk calling for a more compassionate Internet.

That June, she was appointed the ambassador and strategic advisor for Bystander Revolution, an anti-bullying organization, and gave a speech at the Cannes Lions International Festival of Creativity.

While some have referred to this as an attempt at “reinventing” herself, Lewinsky’s TED Talk makes it clear this is simply who she is without the deluge of negative press. Public response to her transition, whether it’s a reinvention or simply an honesty that wasn’t allowed fifteeen years ago, has been overwhelmingly positive. Writers who criticized her have stated they feel guilty for how they treated the situation.

So it seemed as though Lewinsky was finally going to find a way to capitalize on the affair, not just to her own benefit, but to the benefit of anyone affected by online harassment.

In 2019, Lewinsky was interviewed on the late-night show Last Week Tonight with John Oliver, where they talked about her situation and how it may have been different if social media existed in the late 90s.

That same year, it was announced that the scandal surrounding her and Clinton would be the focus of the third season of American Crime Story, which Lewinsky herself will also be co-producing. The season, which is based on the book A Vast Conspiracy: The Real Story of the Sex Scandal, premiered on September 7, 2021, on FX. In the series, Lewinsky is portrayed by Beanie Feldstein and Clinton is portrayed by Clive Owen.

Lewinsky also made guest appearances in 15 Minutes of Shame, GMA3: What You Need to Know, Anderson Cooper 360, and All Against Abuse Gala.

Not much, however, is known about her personal life, other than the fact that she is currently dating. And according to a recent interview, she feels no pressure to marry; she also stated that she has a strong support system consisting of family and friends. For one thing, her mother, Marcia, remains a central figure in her life.

For those who’d like to know what she’s up to, you can follow Lewinsky on social media. She tweets regularly on Twitter (@MonicaLewinsky) where she has over 1.1 million followers.