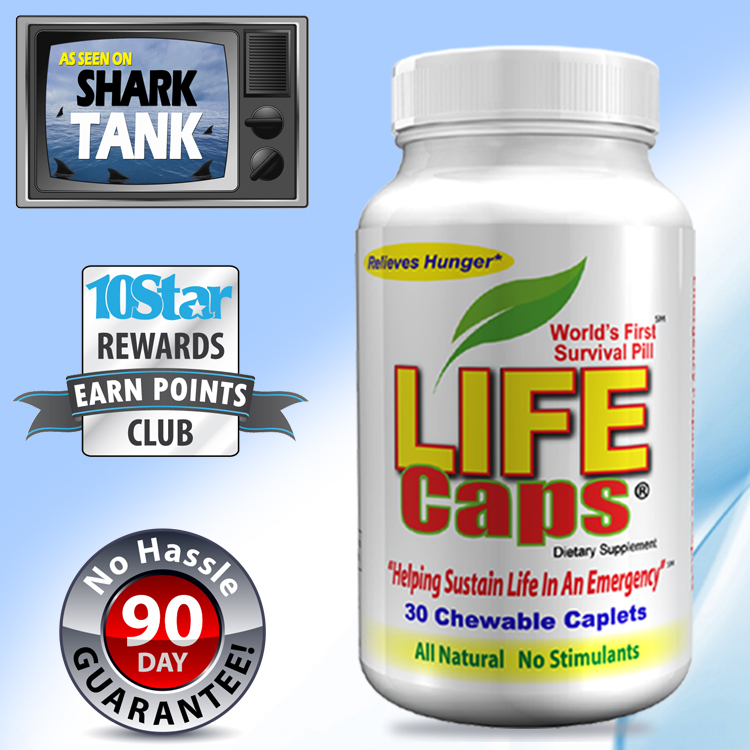 Daryl Stevenet of LifeCaps has just stepped into the Shark Tank. He’s seeking a $200,000 investment in exchange for 30% of his company. Daryl starts by asking the Sharks a question; does he look healthy? Does he look mentally alert? Then Daryl drops a bomb – he hasn’t had any food in eight days. LifeCaps are a life-saving survival pill that a user can take in case of an emergency when food isn’t available. LifeCaps satisfies hunger and provides nutrition – Daryl insists that right now, he is mentally alert.

A few years ago, he got the idea when he saw the story about the trapped coal miners underground in southern Utah. The rescue workers were drilling a four inch hole through around 1500 feet of rock and debris in order to get food to the miners. At this point, Daryl thought, “why doesn’t somebody come up with something like a pill that can sustain life in an emergency?” So Daryl took it upon himself, despite not knowing anything about nutrition or food products. Daryl reached out to a friend of his who had created some of the best, top-selling nutrition bars in America and some time later, LifeCaps was born.

LifeCaps is perfect for any emergency situation such as earthquakes, tsunamis, and other natural disasters as well as excellent for hikers, hunters, joggers and more. With the help of the Sharks, Jim and the Sharks can get the word out about LifeCaps and help everyone be prepared for the unexpected.

Kevin immediately asks about the shelf life of LifeCaps, which Jim says is a five-year shelf life. Lori can’t

believe that Daryl hasn’t eaten in 8 days, but Daryl says that 8 days is nothing; he previously went 17 days without eating for a show in Salt Lake City, and four ladies interviewed him and mentioned that he must have lost weight. Daryl gives the disclaimer that LifeCaps are not a diet pill, but yes he has lost some weight, however he feels that if you lose weight to save a life then the trade-off was well worth it. Lori brings up the point that the women were looking into the vanity aspect of it, and Jim points out at this very show the attendance rate was about 90% women and after he said that he lost weight, they sold out of all 3,000 available units at the trade show. Jim eats a pill for breakfast, lunch, and dinner and if he’s hungry at night then he will take another one.

Jim then offers the Sharks a sample, and Mark asks to see the packaging as well. In each capsule, there are few calories but the ones that are there are primarily to help keep the human body functioning and drive nutrients into the bloodstream. Lori says that upon reading the bottle, everything in the pill is the same as the vitamins she takes every morning. However, Daryl says there is a huge difference; when bears hibernate, they go up to seven months without food. How do they do this? Their bodies receive pure nutrition but zero calories, which leaves them able to burn calories – this is how bears can hibernate and sleep so long. The LifeCap is a metabolic trigger which allows the body to turn stored fat into energy. Robert asks about how much weight Daryl lost in the 8 days, and Daryl says he burned about a pound of day of just living his natural life, when eating just the LifeCaps and nothing else.

Daymond brings up a very good ethical clash for the LifeCaps product; does Daryl want the consumer to eat LifeCaps for every meal instead of eating natural food? Daryl is forced to say that he does not want his pill to replace all food as the end-all method of providing nutrition to the human body, but then Kevin steps in and asks if that is how Daryl feels, how could he and the other Sharks make money? Daymond also gives the example if he buys one pack in bulk, he might not have to eat for five years – or buy another pack of LifeCaps for five years. Even Mark butts in, surprised that the other two “are trying to make money from this nonsense.” Robert asks if the product is available for sale today, and in five years, LifeCaps has done $430,000 in sales. Mark mentions that all Daryl has to do is say that Daryl took it and lost a pound a day, then says that when Daryl came into the Shark Tank, he did not immediately mention that he took his pill to doctors and had it studied and confirmed for it to be safe. Daryl says that he wants to do a clinical study, but doesn’t have the money and that is what he intends to do with some of the investment from the Sharks. However, Mark says that with $400,000 in sales, Daryl has failed to take agency and calls Daryl “so full of crap.” Lori asks if LifeCaps are FDA-approved, to which Daryl says that LifeCaps are actually dietary supplements and are 100% compliant – the Sharks point out that he avoided the question and that “compliant” is very different than “approved.” Mark, of course, is the one to point this out, and Daryl makes a note that Mark is hounding him with all these issues and loopholes, but Robert points out that Daryl knew he was going to come across a guy like Mark when he wanted to start finding real, important capital for his business.

Robert continues on, agreeing with Mark’s earlier sentiments that Daryl had half a million in sales and strong growth, so why did he not get the clinical tests done? Daryl continues to avoid the question, saying that he maybe thinks that now would then be the appropriate time to do the clinical tests. Kevin says that, even suspending disbelief, his largest issue is that he needs to have several bottles of LifeCaps sitting on the shelf “in case the zombies come,” but the trouble is he doesn’t intend to buy any more until that disaster comes. At that point, he buys the product once, and lets it sit on the shelf, so how doe she, the investor, make money? Robert interrupts and says that isn’t the only problem, and then Mark begins to speak his mind.

Mark says that the product is truly one-of-a-kind, and nobody can contest for that, but if it truly worked, it

would be really easy to have it taken to doctors and confirmed to be safe, but Daryl is acting like a snake oil salesman. Daryl is preying on everyone watching the minute he mentions that he lost a pound per day while taking the supplement – that is wrong, and Mark is out “with prejudice,” as Kevin sometimes says. However, Daryl says that he agrees with Mark, but Daymond points out that Daryl is acting like such a hustler. Even Lori says that when something is being sold that somebody ingests, it has to be 100% confirmed that the item in question is safe – all the studies and clinical trials have to be done beforehand, and so Lori exits the deal out of the deal as well. In an embarrassing display, Jim accidentally calls Lori Barbara, the name of one of the other Sharks.

Robert says that the problem is that people want a shortcut – people don’t want to put in the effort that is needed to be healthy and live a long life. However, then a guy like Daryl comes along and people see the shortcut and they don’t look behind the facade, and Robert sees this as irresponsible. Robert is out of the deal as well. Daymond speaks next, saying that the presentation started off well but as the other Sharks began to point out the flaws and inconsistencies of Daryl’s presentation, he could not help but get on their side. He agrees strongly with Lori – this is a pill that is going into somebody’s body, and without the research or clinical trials, the product is a rotten pack of baloney. Daymond is out as well.

Kevin is the last Shark remaining, and he starts by saying that he asks himself he can invest any money, and the answer is blatantly no. Unsurprisingly, Kevin exits the deal as well, leaving Jim without an investment in LifeCaps. Daryl thanks all the Sharks, while Mark disgustingly shakes his head.

LifeCaps Now In 2022 – The After Shark Tank Update

Daryl did not land a deal with the sharks, which wasn’t too surprising seeing as how he didn’t have any scientific evidence to support the product’s efficacy and safety. Without a distributor, his only option was to sell them on Amazon and other online retailers.

Reviews for the product weren’t necessarily positive, however. If anything, many of them were quite critical. For example, one person pointed out the ingredient list, which only listed vitamins and sugar. Despite that, it cost 10 times as much as regular multivitamins (a bottle of 180 caplets went for $49.99). Those who took the supplements also said that they did nothing for their hunger. Some even went as far as calling it a scam, which in all honestly, might not be that far from the truth seeing as how there’s no evidence to back it up.

Given all the negative feedback, it’s not surprising to know that the company eventually closed down. As far as we can tell, they took down their website in 2021. Their social media pages including their Instagram account have also been abandoned. Not only that but the supplements were also removed from Amazon. By then, they only had a 3-star rating.

As of 2022, LifeCaps is no longer available for purchase anywhere on the internet, and honestly speaking, that’s probably a good thing. What’s interesting, though, is that the naming rights have since been obtained by REJ Diamond Pharmaceuticals, a pharmaceutical company that’s based in the Philippines.

What is Daryl up to now? From the looks of it, he’s been focusing on his music. In 2020, he released an album titled, James Taylor Tribute, which featured 20 cover songs including “Something In the Way She Moves”, “You Can Close Your Eyes”, “Long Ago and Far Away”, and “Carolina In My Mind.” Some of his other albums include Daryl Stevenett, Deadwood Cowboys, I Can’t Help It, Hisega Heaven, and Red Boots, all of which are available on Spotify.

According to his official website, he will also be releasing a new album sometime this fall. That’s not all, he also has a number of performances scheduled for August. For the dates and locations, you can check out his site here. You can also follow him on Twitter at @darylstevenett.

He has also written a number of books including “Hobo Club”, “My Friend Dave”, “I Can Heart You”, and “We All Die Alone”, all of which are available on Amazon.