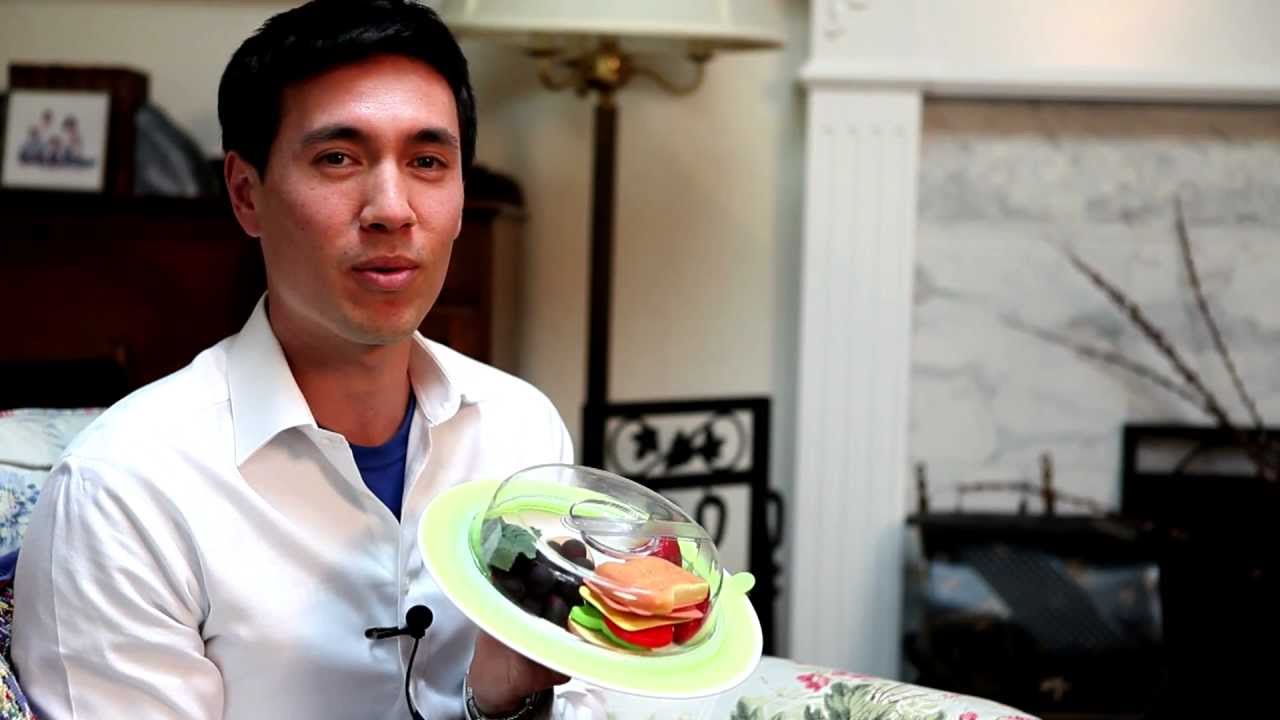 Before Michael Tseng went on Shark Tank, he had a different pursuit – he was finishing up his Ph.D. studies. Michael was also only a residency away from being a practicing physician. So what made him decide to invent the Plate Topper? He also had an engineering background. Would the Sharks invest in this interesting new method of food storage? Let’s take a look. 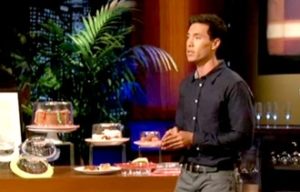 Michael Tseng walked out into the Shark Tank and greeted the Sharks. He introduced himself and requested $90,000 in exchange for 5% of his company, Plate Topper. He asserted that there were huge problems with the standard products that people typically used for food storage, such as plastic wrap and Tupperware. He said that the plastic lids and containers for Tupperware always go missing. He called Saran Wrap, and inconvenient mess as the camera panned over a mess of plastic wrap on the table, and a dirty microwave with food all over it. Michael carried a small plastic container with a handle over to a plate and set it down. He said that the seal was so high that you could lift the plate and stay there, and he demonstrated this. He said, but you could turn anything into a food storage container, even the kitchen counter. Michael asserted that the Plate Topper is microwave safe, and can be easily removed by pulling up on the pull tab.

Michael continued with his presentation, stating that the cleanup for the Plate Topper was simple since it was dishwasher safe. Using the Plate Topper had many benefits since it prevented messy spills in the microwave comma as well as keeping the food warm after being in the microwave. Michael also said that it was easy to store the Plate Topper since they nestled inside each other once in the cupboard. Michael lapsed into an infomercial type tone comma saying “but wait- there’s more.” The Sharks all laughed.  Michael said that if they invested now, will also throw in 3 new sizes is free. He lifted coverings off of the Plate Topper Mini a slightly larger slide and then the cake topper, which did have a cake underneath it. The Sharks “oohed” and “ ahhed” over these innovations. Michael told the Sharks that he already had purchase orders from 2 large retailers, and he needed the Sharks help to fulfill them

Once he finished his presentation, Michael walked out the Sharks with the tray full of samples. As the rest of the Sharks play around with the samples, Lori asked him what two major retailers he was in. Michael told her that the product has been on QVC since March of that year, As well as on Walmart’s website.  Lori asked him if he was in any actual retailers in the brick-and-mortar stores. Robert told Michael had such a good idea Michael thing and said that it was an elegant way to cover food as opposed to plastic wrap or another disposable product. Robert stated that he hated plastic wrap, as he was always ripping it. Robert when he came up with the Plate Topper. Michael informed him that came up with the idea while he was at all from college over the holiday break, about seven years ago. He came up with the notion of the suction plate and eventually combined that with the microwave plate cover.

Lori asked him if he had any engineering or product development background. Michael told her that he did just come up with the idea of Random, but also studied electrical engineering at Princeton University.  Daymond looked impressed. Michael told them he then went on to biochemical engineering, and then to medical school. Michael told Kevin that he could call him Dr. Plate Topper,  Knowing how much Kevin like to give the entrepreneurs nicknames.  Robert asked him if he was a doctor, and Michael told him that he was a physician on paper but was not currently a practicing physician. Michael said that he took the last year all from his practice to completely launch himself into being an entrepreneur. Lori pointed out the framed Patton the stage, and Michael said that he did, in fact, have a Utility Patent.

Kevin wanted to know what the best case scenario was concerning sales over the next 12 months. Michael told him that he had made over million dollars today comma. From purchase orders.  He followed that up by saying that he made that in only four months. He made $500,000 in profit from that million. Kevin stated that he liked what Michael was doing, but what Michael needed was a financier. He informed Michael that he wouldn’t even get up in the morning for 5% equity in the company. He said that he wasn’t interested in the equity of the business, but he was interested in Michael himself. He wanted a 5% royalty in exchange for the $90,000. Kevin said that he loved the product and was willing to stand behind it by getting on QVC and doing the marketing himself. Michael thanked him for the offer and said that he would consider it as he listens to the other offers.

Daymond said that what he loves about Michael is that he’s very smart and slick. Daymond the continued saying that he was also a little greedy, and couldn’t wait to be his partner. Daymond to ask him if he knew that offering the Sharks 5% of 90000 was crap. Michael stammered that he wanted to keep as much of the company as possible. Kevin said that all roads lead to Mr. Wonderful in that scenario.  Since he wouldn’t be taking any of the company and just getting a royalty on the product sold.

Lori wants to know how many units he sold the first time the Plate Topper was on QVC. Michael said that he sold 6080 units. Michael did say the QVC initially ordered $60,000 worth of product and Then followed up with an order for over a million dollars worth of retail Goods. Insisted that the same possibility existed for Walmart. Lori said that she would like to take the $90,000 and add an extra 0 to it. She offered him $900,000 in exchange for 30% of the company. She stated that she wanted to do a separate infomercial the one that was already on QVC. She insisted that she had connections to all of the top retailers in the world. Daymond told Michael that Lori was giving him a 3 million dollar valuation. Michael told her that that was a great offer, but said that it was going to take more than the $900,000 to get rolling. He wanted to know what the financing was going to look like on the back end. Lori told him that as they were making sales, she would continue funding.

Daymond told Michael that Lori was not necessarily the correct partner for him since he was already on QVC. Lori informed him they weren’t even talking about getting on QVC. Daymond one-uped her,  offering 1 million dollars in exchange for 25%. Lori insisted that Daymond did not have any of the connections that she did, or the factory is or the pipeline. Lori said that she started exactly like Michael. She said that she was him just 17 years later with all of these connections. Kevin said that he knew that Plate Topper was going to be worth a fortune one day. Robert wants to know if Michael was seriously considering Kevin’s offer. Michael told him he was going to respectfully decline his offer, since the offers for bigger money where on the table.

Lori looked angry and said that she wanted to take a step back. She wanted to know what would happen if she rolled her offer back to the $90,000 in exchange for the 5% since he seemed more comfortable with that. Kevin let him know that he was losing offers and losing money as Michael laughed nervously. Kevin wondered when he was going to shut up and just take an offer before he loses all of the Sharks Robert said that there is a serious risk of the product not selling, end for Michael to be in negative cash flow. Kevin asked him if he was going to make an offer. Robert said that he could not help him regarding retail stores. Robert went out.  Daymond I asked him if he realizes that he hasn’t given the remaining two starts his actual valuation yet. Daymond demanded to know the real number, and Michael still would not give it to him. Daymond threatens to walk off stage, and Michael finally relented. He said that he was originally going to offer $750,000 in exchange for 5% of the company. He said that that was a valuation of 15 million dollars. Kevin wants to know why Michael came in with his low ball offer if he thought he was worth 15 million dollars. Kevin accused him of doing a bait-and-switch. Michael tried to deny it, but he couldn’t get the words out in time. Kevin said that he might watch a guy with a fantastic business walk away with nothing. Robert’s said it was potentially the best product they’d ever seen.

Michael wanted to start bidding for the highest cash offer. The Sharks all told him that it doesn’t work that way. Daymond yelled at him, demanding to know if he was going to take her offer or not. Lori offered the $90,000 in exchange for 8% and told him that he had exactly two seconds to take it. Michael exhaled sharply and made the deal. After Michael had walked off stage, Robert told Lori that he was shocked that she stayed in. Lori said that she believed in the product. Daymond stated that he couldn’t stand Michael. Lori indicated that she did what she wanted to do.

Plate Topper Now in 2023 – The After Shark Tank Update

Michael managed to land a deal with Lori on the show but as far as we can tell, it was never finalized. Allegedly, he had refused to sign a contract—one that would give Lori decision-making authority for one year. In response, she tweeted “I ended up disliking his technique as well […] I’m leaving!” so, in the end, he was on his own.

Despite that, the company seemed relatively successful. In 2018, they filed patents for two additional products: the Ice Topper (an ice cube tray with an attached lid) and the Bowl Topper (an airtight bowl lid that comes with a steam vent). Both were well received and were made available on Amazon, where they received many positive reviews.

As of February 2023, however, Plate Topper is no longer being made. The same goes for the Ice and Bowl Toppers. Michael hasn’t given up on his innovations, however. If anything, he has just shifted his focus. Instead of toppers, he now focuses on other consumer products in the bedding, kitchen, pets, and home fitness markets.

However, it’s interesting because if you visit the company’s website, you’ll see that there aren’t any actual products listed. There’s only a ‘team’ page and a ‘contact us’ page. Perhaps you have to contact them to learn more about their products? We’re not too sure. According to Michael’s LinkedIn profile, however, Prestagon is the only thing he’s working on at this time so maybe they just haven’t updated their website?

One thing’s for sure, though—Plate Toppers aren’t coming back anytime soon. Their Facebook page hasn’t been updated since 2015 and the item has been out of stock for years on Amazon. They are no longer carried by QVC and Walmart either.