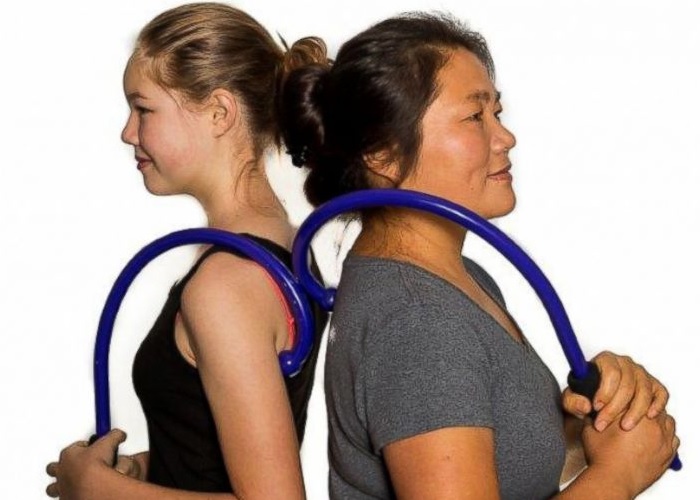 Hard working nurse Hong Cao, would come home from a long shift at the hospital where she worked, and request that daughter Andrea give her aching back muscles a soothing rub. Andrea was more than happy to help her mom out, but the business minded youngster had a spark of inspiration too.

Andrea thought a product that enabled people to massage their own aching muscles, even in hard to reach places, would aid not only her mom, but millions of others too, enabling them to alleviate their own pain whenever they needed to, and she began to develop her own design for such a product.

The Cao family was of Chinese descent, and Angela utilized the ancient healing methods of her ancestors, and invented a massager that used acupressure, a system of triggering pressure points, to both release tension, improve circulation, and reduce pain.

Hong had an engineering background, and helped develop a final prototype, as well as some initial funding to get the business started. The mother and daughter pair worked together, at first making just 20 massagers at a time, with Angela selling them door to door and in local stores. They managed to sell about 800 units, but Angela had bigger plans for the business.

They made an audition tape for Shark Tank and sent it off. For several weeks they received no response, but Angela noticed that the producers of the show were staging open auditions in San Diego. She and Hong took the seven hour journey, and the committed pair camped out overnight in order to secure a chance to audition.

Although she was not initially hopeful that her performance had been good enough, she was contacted two weeks later, and eventually her application was successful. The Q-Flex segment was first shown on the Season six Festive special, aired on December 12th 2014.

When Angela and Hong entered the tank, they had decided to ask the sharks for a $20,000 investment in exchange for 20% equity in the Q-Flex business.

Hong began the pitch by detailing how sore she felt after long hours at work and the massages Angela had given her to help. Angela took over by explaining the conception of the Q-Flex idea, and the months of testing until the pair had finally come up with the completed product.

Angela had told the sharks she was aged 13 when she introduced herself, but the confidence of her smooth flowing pitch in no way reflected her lack of years, she was a natural speaker and the pitch would have been a professionally polished one coming from anyone, from such a young entrepreneur, it was even more impressive.

She detailed the innovative design, she revealed the medical benefits of trigger spots, and she explained about the power of acupressure, but she finished off magnificently. She told the sharks that 65 million people suffered from back pain in the US alone, and her portable, inexpensive and stylish product was the answer to the problem. She asserted that the sharks knew such a huge market could only mean one thing, ‘Cha Ching’ she said, by way of explanation, before asking which sharks wanted to make a deal and ‘Flex their way to success’.

Robert Herjavec smelled a rat and doubted Angela’s honestly, ‘I think you’re lying’ he told her, and her smile disappeared. ‘There’s no way you’re 13’ he explained, and her smile came right back as he called her presentation ‘fantastic’, and the other sharks agreed.

The sharks admired the functionality of the Q-Flex a little, and the subject of sales inevitably came up. They looked a little disappointed when they heard that total sales so far had only been 800, but their admiration of Angela herself grew, when she explained that she had made them all personally, door-to-door.

Kevin O’Leary, rubbing his back with the Q-Flex in a distracted manner, asked what the retail price was, $25 to $35 Angela answered immediately, when he asked about the cost per unit she was equally quick in telling him it was only $4.50.

The impressive profit margin made Mark Cuban laugh aloud, ‘A capitalist is born!’ he exclaimed gleefully.

Robert Herjavec asked if the product was patented, and Angela confessed that there was not currently a patent application for it. Hong elaborated and explained that financing the patent process was beyond their budget at the current time. Robert asked if the product actually had any proprietary features. Angela revealed that the Q-Flex massager was uniquely manufactured and designed, both features that she believed would be patentable.

Kevin O’Leary told Angela he was OK with her quitting school to run the business, it showed commitment, and although Mr Wonderful was at least half joking, he had a serious point to make. The business was a ‘hobby’ business in his eyes, Angela couldn’t quit school and Hong couldn’t quit her job, and that made the business a bad investment in his opinion, and with that, Kevin was out.

Lori Greiner, possibly the most suitable shark for the Q-Flex business, had some bad news for the pair. She had previously sold a ‘very similar product’ on her QVC platform, and although she didn’t give too many details away, she alluded to the fact that the product had been problematic to sell, and not entirely successful. She apologized, but explained that because of her personal experience, she was out too.

Robert Herjavec sensed that Lori’s previous experience had centered around patent issues, he pressed her for more details and she admitted that she didn’t think the Q-Flex would receive one, reluctantly she advised him not to invest in the business. He was strongly influenced by his fellow sharks experience and he also dropped out. He sweetened the rejection a little, by telling Angela that he believed in her, unfortunately far more than he did her product.

Mark Cuban and Barbara Corcoran appeared to be deep in conversation at that point, when they concluded their discussion, Mark spoke to the Q-Flex pair. He explained that he and Barbara worked well together and could help the business, they could help with operations, set up a website and they also had an offer.

Barbara explained the details, she and Mark would provide a $25,000 investment, in exchange for 25% equity between them, but a huge bonus for Angela and Hong was that they would also run the business’s operations for them. All that would be required in return, was a guarantee that Angela would ensure she could find the time to deal with any sales calls. And that was because Barbara believed Angela was going to ‘sell like crazy’, and Mark agreed. Angela and Hong were beaming at the offer, there was never any doubt of their decision and they happily accepted it. After the show Angela was ecstatic, she couldn’t believe the result and was excited to be teaming up with not one, but two new shark partners.

The mother and daughter team received an update segment just a few months after the original episode aired. According to the clip, they had received more than 17,000 orders after appearing on the show, which translated to over $500,000 in sales. Not only that, but with Mark’s help, they were also able to build a website for the company.

Due to the fact that they’re working out of their home, however, they soon found themselves falling behind on the orders. Thankfully, with their family’s help, they were eventually able to catch up.

Barbara then showed up in the segment and announced that they had moved the entire operations to a fulfillment center, which hopefully, would take some of the stress off their shoulders. Not only that, but it would also reduce shipping rates and give them more time to deal with the stream of emails that are constantly coming in.

A year later, Q-Flex was given another update—this time in an episode of Beyond the Tank. In the segment, Barbara announced that their goal is to get Q-flex into big retail stores nationwide. However, they soon ran into problems. When the units came in, approximately 5% had to be sent back due to damage; this added a further delay to the entire process. Still, they’re able to ship out 800 units per day.

Barbara then talked about the numbers. She revealed that while they did 500K in sales the first month and $471K the second month, the figures have since gone down—from $52K to $8K. She then proceeded to tell them that new sales are not coming in because they were not advertising the product.

Barbara then suggested that they go visit the manufacturer, which is local and only an hour away. She emphasized that it would allow them to check the quality of the products before they’re sent to the fulfillment center. Just as she was about to leave, Andrea handed her a check—one that repaid both her and Mark’s investments. Barbara is blown away by how fast she’s received a return on her investment.

The pair then visited the manufacturer where they talked about the possibility of on-site quality control and assembly. They then spent some time calling local fulfillment centers. However, they quickly found out that the total costs would be much lower with the Dallas location so they go for that instead.

Fast forward to 2022, and Q Flex is still up and running. If anything, their sales have gone up since their appearance on Beyond the Tank.  Andrea, who had recently finished her junior year at Stanford University, also started a new business called Andrea Equine that specializes in saddles and other horse hear. With the earnings, she even bought a ranch and adopted a wild Mustang.