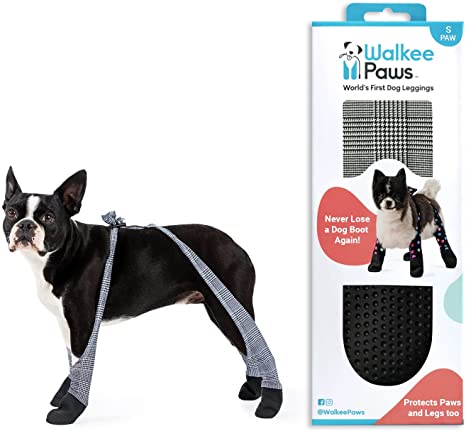 Walkee Paws was founded in 2018 by Lisa Baronoff. At the time, Lisa was an owner of two dogs whom she loved to take for walks daily; however, as a Manhattan dog parent, she was always worried about her pups being exposed to germs, etc. With good reason. Unfortunately, one day during their walk, one of her pups had been susceptible to some spilled chemicals on the ground. While this incident may have caused her worries to escalate, it determined her to find a new way of protecting her dogs paws.
She had contemplated and attempted dog booties many times; however, her dogs were not fans of them, as was she. They were always a hassle to put on the dog, or they fell off at inconvenient times. She believed that the concept of dog booties was practical and efficient, but that something more needed to be added. Perhaps something to hold the booties up? Or a design that’s more comfortable, easy, and even fun to work with?
Shortly after, with the helpful inspiration of her dog Toffee, Lisa came up with Walkee Paws – a more superior dog bootie. Once she had nailed down the designs and necessary functionality of the product, she launched her virtual business, which can be found at WalkeePaws.com along with a variety of other accessories. But what exactly is a Walkee Paw?
Gone are the days of having your dogs booties slip off during walks – with Walkee Paws, they’re sure to stay on as they have a harness-like piece that connects at their back. Walkee Paws were essentially designed to be a combination of booties and leggings for all-sized pups. The leggings are loose-fitting 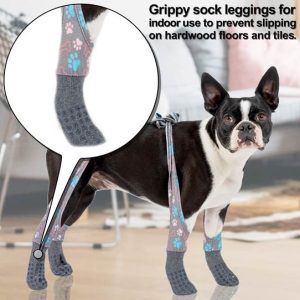 around the legs for comfort and provide rubber booties for the necessary protection of their paws. They also have grips on the bottoms of the booties to ensure slippage does not occur. Not to mention they’re easy to put on. The product can be put on your dog similarly to a pair of pants, with the harness securely placed on their back.
From dirt and chemicals to snow and hot pavement, Walkee Paws keeps dogs paws clean and safe from anything they may step on outdoors. They’re also waterproof, making them efficient in each season.

Lisa Baronoff and her Walkee Paws appeared on Shark Tank on February 26, 2021 in hopes of receiving an offer of $150,000 for a 5% investment in her company. She began presenting her pitch, mentioning that Walkee Paws were the first ever made leggings for dogs – leggings that would actually stay in place. She went on to speak briefly of her sales and the patents that are already in place, along with the pending patents as well. Within just a couple months of creating Walkee Paws, Lisa had successfully earned $64,000 from sales. Following that, her sales increased to over $500,000 in 2019 and up to $1 million in 2020. 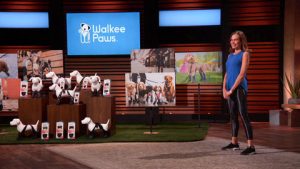 After hearing Lisa’s pitch and discovering how Walkee Paws worked, the sharks where overall impressed with the product and they agreed that it was a great idea for protecting dogs paws. Although they all had some sort of praise for her product, they didn’t appear to be interested enough to invest in it. She did, however, receive two fair offers from Kevin O’Leary, with the choice to choose one that she felt was fair as well. O’Leary presented both offers; one being $150,000 for the 5% investment, and a $2.70 royalty, which would become a $.50 royalty once the offer was paid off. The second offer was for $150,000 for a 20% investment in the company.
Before making her decision, Lisa held out to hear what the other sharks wanted to say. Starting with Mark Cuban, he believed Walkee Paws were an incredible idea; however, he was out as he claimed he’s not a Walkee Paws kind of guy. On to Barbara Corcoran; she asks the entrepreneur what she would use any gained money for. Lisa replies, saying she would put it all towards her sales, as she’s done since starting her business. While Corcoran liked that idea, she was out as she felt that Lisa didn’t need a partner. Last but certainly not least, Lori Greiner steps up to say she’s out as well – while she loved the idea, she didn’t believe it was the right investment for her.
Following the other sharks backing out, it was clear that Lisa was feeling some sort of dismay; however, it wasn’t over for her yet. O’Leary’s two other offers were still on the table. Lisa contemplates both offers and proceeds to ask O’Leary if he would consider doing $150,000 for a 10% investment. She feels like this offer is the better way to go as it would still benefit her company; however, O’Leary feels that his offers are more fair. Once their debate had concluded, Lisa decided that she didn’t want to exceed the 10% investment stake, nor did she want to deal with royalties. She denied O’Leary’s offers and was left without a contract.

Walkee Paws Now in 2023 – The After Shark Tank Update

Although Lisa left Shark Tank without a contract in place, Walkee Paws appears to remain up and running as of 2023; however, many customers seem to think she missed out on a great deal with O’Leary. Since leaving Shark Tank, the company has extended their products, which can be found on Amazon and their company website, WalkeePaws.com. They offer socks, puffer coats, raincoats, leashes, etc. They’ve also launched new designs and fits for the leggings, including drawstrings to adjust to a more comfortable fit.
In addition to that, Walkee Paws also launched a ‘My Doggie & Me’ line, which can currently be found on their website. 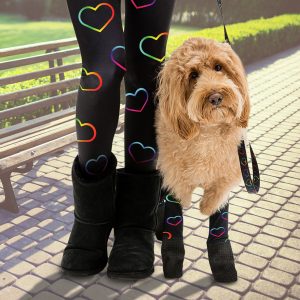 While the brand has been working on increasing their digital footprint and sales, Walkee Paws have withdrawn from free returns and escalated their prices a bit. Walkee Paws has partnered with Pricestack, which has helped them increase their revenue by about 57% with a 71% profit boost. Along with their other achievements, the company has received appeals from Chewy, as well as businesses around Argentina, and Japan.
Overall, Walkee Paws continues to be active on all social media platforms, such as Instagram, where they announce contests like the Howl-Ween Contest and the Walkee Wag Challenge. It’s safe to say that Walkee Paws will remain in business for awhile, continuing to achieve their mission of making

“fashion functional ways to make walks with your best friend even more fun.”