Show No 2022 Update – See What Happened After Shark Tank 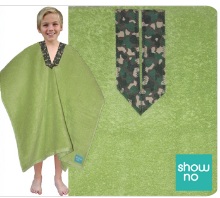 Shelly Ehler is a woman who took a simple idea and turned it into a new business venture. A lot of great products on the market were created by people who noticed an everyday issue and invented a new, simple product to fix it. The same could be said for Shelly. When families take their children to the beach, finding a convenient place to get changed into and out of bathing suits can be difficult. That’s where Shelly’s product the ShowNo comes in handy. The ShowNo is basically a towel that has a slit in the center of it, which is where your child’s head is supposed to go through. The rest of the towel drapes around your child’s body which allows them to be covered while they change out of their wet clothes. Not only that, but it’s also just a fun new product that will keep your kids dry at the beach, pool, and even during bath time.

Despite starting the business on her own and obtaining some success with it since the beginning, Shelly wants to take things further with the ShowNo. She wants to supply her product to water parks and amusement parks to really jump start sales and get her brand’s name out there. However, she is going to need some help with attaining that goal. Hoping to find help in one of the Sharks, Shelly took her ShowNo to ABC’s Shark Tank.

Ehler entered the Shark Tank seekings a $50k investment in exchange for 25% equity in her business. She brought her two sons with her to help present her pitch to the Sharks. The idea for ShowNo came to Ehler one day when she and her sons were at the pool. Her oldest son wanted to get changed into his dry clothes, so he asked his mom to hold up a towel for him so he could stay covered while he got changed. While her

oldest son was getting changed, her youngest started to get impatient and in the midst of her frustration, Ehler got an idea. She then took a towel and cut a slit in it, creating a new sort of towel poncho that would keep kids covered while they got changed. After explaining her story, Ehler then had her sons hand out custom made ShowNo’s that they brought for each of the Sharks to have.

Once her sons left the Shark Tank, Ehler began to explain that it isn’t just money that she was looking for. What she really wanted was a mentor of sorts. Each of the Sharks have taken simple ideas and turned them into million dollar businesses. It is her belief that together, she and one of the Sharks could really turn her ShowNo business into something great and successful.

Lori Greiner was the first Shark to speak up. She asked Ehler where she has been making these ShowNo’s. For the most part, the majority of her products are made inside her house. And what she likes most about her own product is that when you lay the ShowNo down, the slit closes up and you have a whole towel that will keep sand out of the center of it. In this way it is extremely different from the towel poncho’s the Robert Herjavec says that he’s seen on the market. She even has a patent on the design of her product, which she got by trading custom made drapes to her former neighbor who also happened to be a patent attorney.

After receiving the patent, Ehler then came up with the idea of selling these towels to water parks. Each of the towels could be custom made and have the name of the park printed on the collar of the ShowNo, which Herjavec thought was a brilliant idea. So far she’s made accounts with Lego Land in California and Six Flags Magic Mountain. The towels have been very popular in these parks and she sells them in bulk for $9 dollars each. At retail locations, they are sold for $19.99, which is a great profit margin when she makes them for only $6 dollars. In total, ShowNo has sold around $15k worth of units.

The Sharks did’t appear to be too thrilled with the amount of her total sales and Kevin O’Leary was the first to let her know why. According to him, her business is very seasonal and she would have to spend all her money on manufacturing the towels in bulk and hope that each of the units were sold in order to make a decent profit. He decided that he did not like seasonality of her business and decided not to give her an investment. Ehler said that at first she did believe that the ShowNo was going to be seasonal, but she later realized that her product also doubles as the perfect bath towel that children love to use. In addition to that, if she supplied 50 water parks with her towels and the sold 20 a day, after three months she would have made almost a million dollars. This is something that she believes is very doable.

Herjavec admitted that he admires her energy and passion about her business, but unfortunately he wasn’t so inspired by the product itself. He really couldn’t see the ShowNo making that many sales, so he too didn’t end up investing into her business. Mark Cuban asked her what she would do if she was put in a situation that called for her to leave her family during a birthday in order to attend a business meeting, and she told the Sharks that she would attend the meeting because her family knows that she loves them unconditionally. In addition to that, her family also realizes how important this opportunity would be because both she and her husband were hit hard during the recession. They both lost their jobs and were forced to sell their homes and move. Becoming successful with her business is crucial, so going away on business would not be a problem for her. 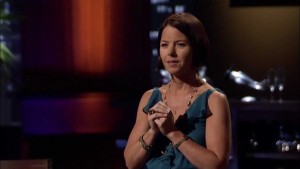 Daymon John said he was interested in the product, but her sales didn’t correspond with the amount of money she was asking for. Ehler could understand this, but she revealed that she had a call in with Disney amusement parks and she was going to work extremely hard to make sure she landed a deal with them. Happy with that news, John decided to offer her $50k in exchange for 50% of her business. However, Greiner wanted to put a counter offer on the table. She could see so much of herself in Ehler that she decided to write a check for $50k right there in the Shark Tank in exchange for the original 25% equity. All she asked was that Ehler keep her passion about the business and that she work with Greiner to get the ShowNo sold in every single water park there is in the United States.

Ehler was extremely excited and ready to accept Greiner’s offer, but John jumped back in to offer her the $50k for a 20% stake in the company. That’s not the only twist that happened though. Cuban takes his turn to offer her $75k for 25% because he believes that her business is worth more than what she asked for. Greiner tried to convince Ehler that she is the best person to strike a deal with because she has connections with QVC and she is also a women, so they “speak the same language”, but John counter argued that he has multiple connections with retail locations such as Bed Bath & Beyond and JCPenny’s. In addition to that, he also decided to instead offer her $75k for still only 20% of her business. Greiner also decided to match the $75k, but still wanted 25% of ShowNo.

With so many offers on the table, Ehler asked to step outside to speak with her husband for a minute before making a decision. While Ehler spoke to her husband, O’Leary made it very clear that he thought all of the other Sharks who put and offer on the table were being foolish because he didn’t believe that this was a product worth putting money into. When Ehler stepped back into the Shark Tank, she made her final decision to accept Greiner’s offer over John’s and Cuban’s.

Following their appearance on Shark Tank, they were able to bring ShowNo to the Today Show. Thanks to that, their products quickly sold out. If anything, they were incredibly popular throughout the summer season.

They also managed to secure a deal with Disney, where they’d provide towels for their water parks. Allegedly, one of their employees, who’d been seeking new merchandise for the parks, happened to be on set that day while they were filming Shark Tank. As far as we can tell, however, they only lasted for a short time as Disney chose not to renew the contract.

That’s not all, they also distributed the towels to other water parks throughout the country. In fact, it was their main source of income. At their peak, they sold 20 towels a day across 50 water parks, each of which went for $19.99.

Despite that, the company eventually threw in the towel (no pun intended) in 2015. Not only was the business seasonal, which limited their revenue, but they also had limited capital (no further investments were made following Shark Tank). That’s not all, demand was also limited as the poncho-style towels were only for small children. As a result, it was difficult to rise the business to a large scale.

At one point, they had come out with a new iteration of the product that’s designed to help the elderly and those with disabilities, but it never really took off.

As of 2022, SharkNo is no longer in business. Their website is offline and their social media pages haven’t been updated for several years.

What’s Shelly up to now? She now runs a new business called, All Blown Up, which makes lifesize cutouts, posters, and banners. They were even featured on the Today Show several years back. For those who are interested, you can check out their website here.