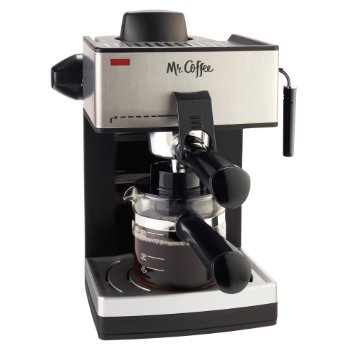 As sad as it is to say, simple coffee makers that brew a nice big pot of coffee are probably becoming a thing of the past due to Keurig coffee makers being invented. Keurig really set off a huge change with their innovation of coffee pods, and now almost every coffee maker out there allows for “K-cups” or one of the many other patented alternatives to K-cups. However, good old coffee makers can be essential for anyone who just wants a nice cup of coffee and doesn’t want the potential risk of being poisoned by some of the nasty chemicals in K-cups. In this review, three coffee makers are being covered; the Mr. Coffee BVMC-SJX33GT, the Hamilton Beach 12-cup Digital Cuisinart DCC-120, and the Melitta 10 Cup coffee maker. 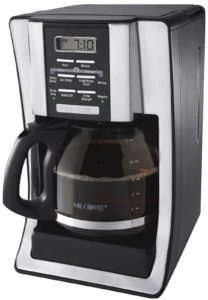 The Mr. Coffee BVMC-SJX33GT is a nice, modern-looking coffee maker that can fit with any kitchen. The design incorporates a water window, allowing the user to check on the amount of water in the reservoir, a cord storage to help stop clutter and protect the cord, and a brew strength selector panel. The BVMC includes a variety of functions, some of which are staple to coffee makers like a color-changing indicator light, a removable filtering basket and a brewing pause function that keeps your coffee warm if you’re not ready to serve it yet. The Mr. Coffee BVMC also has a two-hour shutoff feature, keeping coffee warm for two hours before automatically shutting itself off.
The BVMC includes a water filtration system that helps purify water as well, advertised at removing up to 97% of chlorine from water used to make coffee. There is also an addon double-walled thermal carafe accessory that turns the coffeemaker into a thermal coffeemaker, keeping coffee warmer much longer than two hours. The pot holds just over 8 cups of coffee.

The Mr. Coffee BVMC-SJX33GT is available for as low as $30, based on internet prices, and includes the coffee maker, the removable filter basket, and the pot for brewing coffee. 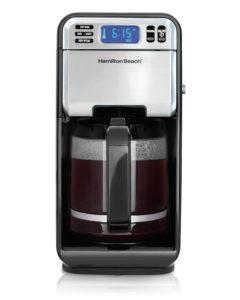 The Hamilton Beach Digital Coffeemaker DCC-120 is an aesthetically-pleasing take on coffee makers, having a very low profile and looking far more different than any coffee maker. The Hamilton Beach DCC-120 holds up to 12 cups of coffee, and allows for grounds to be ‘front-loaded” into a drawer-type container that pulls out from the top of the coffee pot. This drawer can be completely removed, and contained within is where the filter basket goes – this filter basket is also removable from the drawer. On the top of the DCC-120 is the interface, which has a clock, the on/off button and a few other buttons allowing for control of how the coffee maker brews coffee. The DCC-120 has a 2 hour automatic shutoff timer, and has a glass window for the water reservoir as well.

The DCC-120 is available for a little bit more expensive price, starting at $42.99 based on internet prices. The purchase includes two filters, the coffee brewer and a coffee pot. It’s also worth mentioning that the coffee pot for the DCC-120 is a patented design, so if a pot were to break, the only place to get a replacement would be directly from Hamilton Beach themselves (which means paying full price.) 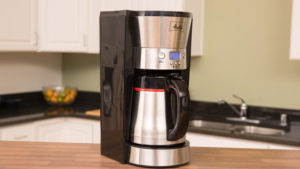 The Melitta 10 cup coffee brewer boasts a cone design, which is the main point of its advertising – the cone design is supposed to focus the water and grounds together more than typical coffee makers, which enriches the flavor due to the unique brewing process. The top part of the cone swings out, which is where filters and grounds are eventually placed. The Melitta brewer includes a sealed, thermal carafe with thumb-activated pouring (meaning no drips!) that should keep your coffee warm long beyond the brewer shuts itself off after the two hour warming period. The Melitta has three different settings for coffee taste, which include regular, bold, and robust. Also included is a pause and serve function, letting a user stop the brewing process to pour a cup of coffee and then resume whenever they wish. The Melitta has a two-hour shutoff period, warming your coffee in the included thermal carafe for two hours before shutting itself off.

The Melitta 10 cup brewer is a little more expensive at $47.99, but is well worth it for the included thermal carafe which might otherwise cost you $15 or more alone. There is a 10 cup version of the thermal carafe, and a 12 cup glass carafe version of the coffee maker. Both versions include their respective carafes and the coffee maker itself – there aren’t a lot of extra bells or whistles with the Melitta 10 cup Brewer.

If you’re looking for a good cup of coffee from a sleek, contemporary-looking coffee pot, then the Melitta would be the way to go – supposedly there is actually a noticeable taste difference due to the conical design of the coffee pot. However, the Melitta 10 cup Brewer is the most expensive of the brewers – if a potential buyer was looking for a cheaper coffee pot, the Mr. Coffee would be the better purchase. Mr. Coffee has been around for a longer time than Hamilton beach, and I could only find a 90 day warranty for Hamilton Beach coffee makers – Mr. Coffee offers a year long warranty for their coffee makers.