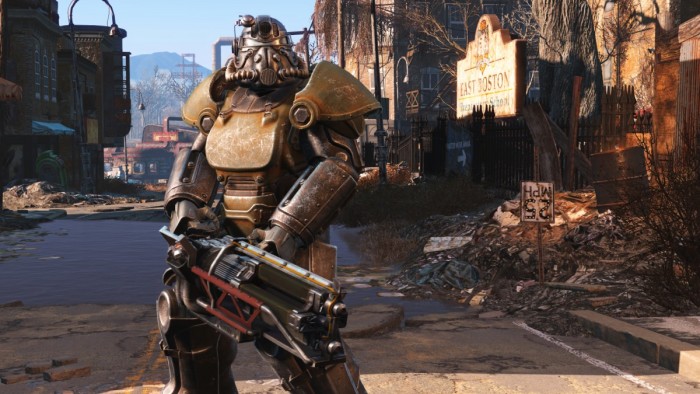 Fallout 4 is a post-apocalyptic role-playing game that features an open-world environment. The fourth game in the Fallout series, it takes place in the year 2287, ten years after the events of the previous title, and revolves around a character known as the “Sole Survivor” who emerges from an underground nuclear shelter

Praised for its depth, content, soundtrack, and crafting, the game was a commercial success, earning more than $750 million within a day of its launch. Several expansions in the form of DLCs have also been released including Nuka-World and Far Harbor.

Did you recently finish the game? Looking for something similar to fill in the void? Then you’re at the right place! We’ll be going over some similar game titles below.

Without further ado, here are some games that you might want to try if you like Fallout 4.

Scarlet Nexus is an action role-playing game that’s set in an alternate universe where humanity has developed technology that gives individuals extrasensory superpowers. People with these powers are tasked with protecting humanity from mutated mutants, which feast on human brains.

There are two playable characters to choose from: Kasane Randall and Yuito Sumeragi. Played from a third-person perspective, players can attack monsters with short-range weapons or abilities such as psychokinesis, the latter of which allows you to throw debris and objects at enemies. There’s also a skill tree known as the “brain map”, which you can use to upgrade your powers. Players can also acquire unique combat abilities through an ability called “brain link.”

Released in June 2021, the game is available for Windows, Xbox One, Xbox Series X, Series S, PlayStation 4, and PlayStation 5.

9. Remnant: From The Ashes

Remnant: From the Ashes is similar in that it’s also set in a post-apocalyptic world- one that’s overrun by zombies and monsters. Unlike Fallout 4, however, it incorporates a third-person shooter element where players can equip up to two weapons (e.g. sniper rifles, hunting rifles, machine guns), in addition to a melee weapon.

Not only are you able to create your own custom character, but you can also play with friends and progress through the story together. Enemies are also different every time you return to the checkpoint so there’s a nice variety in gameplay.

So far, two DLCs have been released: Swamps of Corsus, and Subject 2923, which came out in April 2020 and August 2020 respectively. Both expansions add enemies, bosses, weapons, mods, and events to the main area of the campaign.

Currently, the game is available for Windows computers, Xbox One, and PlayStation 4. A Nintendo Switch port is also scheduled to be released later this year.

Horizon Zero Dawn is a post-apocalyptic action RPG that’s set in the distant future where robotic machines roam the planet and humans have gone back to living in Celt-like tribes. Played from a third-person view, players take on the role of Aloy, a hunter who can kill enemies in various ways- from using explosives to set traps.

The map consists of various regions (e.g. jungle, forest, snowy mountain, desert) and fast travel can be accessed via campfires. There’s also a number of quests that you can take on- ones that’ll take you across the various tribes.

If anything, it’s often compared to the Assasins’ Creed series in terms of gameplay. However, its battle system and world-building are much more developed and put it in a class of its own.

The first game in the Horizon series, it was originally released for the PlayStation 4 in February 2017. Since then, a PC port has also been released in 2020. Praised for its story, combat, visuals, and open world, the game has won numerous accolades and has sold more than 20 million copies, making it one of the best-selling PS4 games.

A sequel titled Horizon Forbidden West has since been released for the PlayStation 4 and PlayStation 5 in 2020. Netflix is also developing a TV series based on the game.

The Deus Ex series is a little different from Fallout 4 in that it’s set in a sci-fi cyberpunk world as opposed to a post-apocalyptic one. However, its open-ended levels, branching storylines, and gameplay is very similar in terms of depth.

Since it was originally released in 2000, several additional titles have come out including Deus Ex: Mankind Divided and Deus Ex: Human Revolution, both of which are prequels to the original game. The former was released in 2016 and was praised for its graphics, gameplay- which combines stealth, first-person shooter, and role-playing elements- and narrative.

While the original game is only available for PlayStation 2, Microsoft Windows, and Mac OS, the more recent games such as Deux Ex: Mankind Divided can be played on PlayStation 4, Windows, Linux, macOS, and Xbox One.

The Elder Scrolls V: Skyrim is an action role-playing game that takes place in the northern province of Tamriel. The player’s character, Dragonborn, must travel across the lands to defeat Alduin the World-Eater, a dragon creature that’s prophesized to destroy the planet.

Not only is the game open world, but there are also numerous quests that you can do, all of which will help boost your skills. Certain NPCs will even accompany the player and help them out in battle. Speaking of which, there are a variety of weapons and armor items that you can use, in addition to magic spells.

You may also encounter wildlife while exploring the game world, some of which may be hostile toward your character.

Originally released in November 2011 for Microsoft Windows, PlayStation 3, and Xbox 360, the game is the fifth installment in The Elder Scrolls series and is often considered one of the greatest games ever made, having shipped more than seven million copies within a week of its release. A remastered version of the game was also released in October 2016.

Three expansions have also been released including Hearthfire, Dawnguard, and Dragonboard.

Metro Exodus is a first-person shooter game that features stealth and survival horror elements. Developed by 4A Games, it’s set in the post-apocalyptic world of the former Republic of Kazakhstan and Russian Federation, where the player must defend themselves against hostile humans and mutated creatures.

Similar to the previous games, the player takes on the role of Artyom, who travels to the far east with his allies on a train known as the “Aurora.”

While the levels are somewhat linear, there’s an exquisite crafting system that you can use to create a variety of weapons. There’s also a dynamic day-night cycle, which affects how the game progresses (the entire game is set over the course of a year).

The third installment in the Metro game series, it was originally released for PlayStation 4, Xbox One, and Windows in 2019. A macOS and Linux port was later released in 2021, in addition to an enhanced version for the Xbox Series X/S and PlayStation 5.

The Outer Worlds is an action role-playing game that’s made by the same developers as Fallout: New Vegas. Given that, it’s not surprising to know that they have a lot in common- from the script to the depth of content.

Set in an alternative future where humans have started to colonize alien planets, you must explore the furthest reaches of space after becoming lost while traveling across the galaxy in a colonist ship. Ultimately, the goal is to reach The Outer Worlds, in an attempt to save the passengers of The Hope, one of the ships that were sent to colonize Halcyon.

In terms of how to do that, it’s up to you how you want to navigate the solar system.

Originally released in October 2019 for PlayStation 4, Xbox One, and Windows, the game has been praised by fans and critics alike and has sold more than 4 million units. In fact, it has won numerous awards including a Game Critics Award for Best Original Game, a GLAAD Media Award for Outstanding Video Game, and a Nebula Award for Game Writing.

Since the game first came out, a Nintendo Switch port has also been released in June 2020.

Nier: Automata is a Japanese role-playing game that’s set during a war between human-crafted androids and alien-created machines. A sequel to the 2010 game Nier, it follows the trials of scanner android 9s, rogue prototype A2, and combat android 2B.

The way it’s designed, the story requires you to play the game more than once as additional story elements are unlocked with each subsequent playthrough. In terms of gameplay, it combines RPG elements with hack-and-slash combat.

Not only can you navigate on foot, but you can also summon wild creatures to ride and in some cases, you can even pilot them to fight enemy machines. Two melee weapons can also be taken into combat. In total, there are four classes of weapons: bracers, long swords, spears, and short swords, each of which has its own pros and cons.

Originally announced at E3 2015, the game was released for PlayStation 4 on March 7, 2017, and for Windows computers on March 17, 2017. Xbox One and Nintendo Switch ports have also been released in recent years.

While the game’s visuals drew some criticism, many praised the title for its gameplay, themes, story, and music. Two DLCs have also been released, which include additional accessories and costumes, new battle arenas, and boss fights.

Fallout New Vegas is developed by Obsidian Entertainment and is a spinoff title of the Fallout series, which features an open-world post-apocalyptic environment. Set in a town called New Vegas in the Mojave Desert, the player takes on the role of a courier who’s tasked with delivering a special chip.

While delivering the package, however, he’s ambushed, robbed of the chip, and buried in the desert. Fortunately, he survives miraculously. It is then up to him to uncover the mystery behind the chip as well as his would-be killer.

Not only is there a vast world to explore but there’s also a plethora of branching stories and roleplaying options. Players will also meet friends (and enemies) along the way, some of whom may come from warring factions.

While the game experienced some glitches and bugs on launch, they were quickly fixed. In the end, the title was a huge success, having sold more than 12 million copies worldwide. That’s not all, the game has also obtained a cult following, some of whom consider the title the best Fallout game in the series (in addition to being the best RPG of all time).

Cyberpunk 2077 is unique in that it takes place in a futuristic city- one that’s run by corrupt corporations. An action role-playing game, it’s played in first-person perspective as V, a mercenary who is tasked with obtaining a special cybernetic implant, one that threatens to overwrite his own body with the memories and personality of a deceased celebrity.

An open-world game, it features six different regions including Westbrook, Santo Domingo, Pacifica, Watson, City Centre, and Heywood, all of which has their own inhabitants.

While its setting is completely different from Fallout, it provides an immersive experience, one that Fallout 4 fans are bound to enjoy. There are also a lot of customization options. For example, you can customize the character’s clothing, voice, background, hairstyles, and body modifications.

While the game was originally released for Windows, Xbox One, Stadia, and PlayStation 4, in December 2020, it has since been ported to the PlayStation 5 and Xbox Series X/S in 2022. An expansion titled, Phantom Liberty, has also been announced and will be released sometime in 2023 for Microsoft Windows.