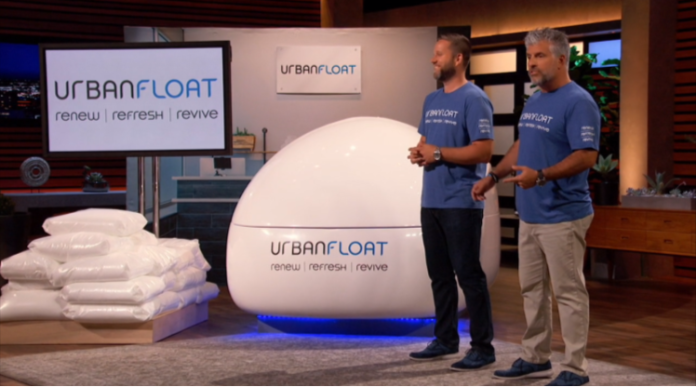 Urban Float is a beauty spa that offers pods that provide a therapeutic hydrotherapy session. The pods are relaxing and with their use, the client will experience a higher ability to focus, faster recovery from injuries, and less physical pain when going about their daily activities. Urban Float was started by Scott Swerland and Joe Beaudry.

The device used for the float therapy is not owned by the pair. Instead, it’s the spas that they own. The pairs started the business with little capital and although Urban Float has grown, they needed more capital and advice on the best way to grow the business. This is the reason why they applied to be on Shark Tank.

The pair’s request was successful and they were invited to be on the 16th Episode of the tenth season. This episode also featured Matt Higgins as a guest shark.

Scott Swerland and Joe Beaudry were looking for $500,000 for 5% of the company. Lori was the first to speak. She said that float tanks had been around before but they were scarier and she thought that the ones Scott and Joe showed were thankfully much better. Joe agreed and said that with their modern float tank, people would want to get in. The tanks had adjustable music, lighting, and more. The Urban Float centers were also built with a high-end design. 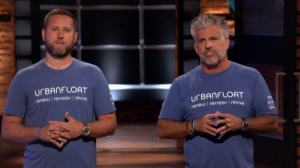 Being concerned about hygiene, Kevin asked whether a new customer would get a new salt bag and was told that the water is filtered four times and treated with heat and UV rays before its reuse. This makes it cleaner than what people get in their taps.

Matt Higgins said that the Miami Dolphins were doing some work in their recovery program and the Urban Float could fit into it. He liked the idea a lot but wanted to know more about it. Swerland said that Urban Float had 4 corporate stores and In Seattle, they have the largest float center in the USA.

Scott said that Urban Float got into franchising two years before. Somebody made an offer to buy one of their machines from them. The person returned the previous month to order 4 more devices for 4 more of her stores. Urban Float is now registered in every state.

Mark Cuban then asked them how they funded their business activities. Joe Beaudry told him that the first store was opened with $300,000 raised from friends and family.  Since then, they had made more than $1,000,000 in profits and they had used that to open the rest of their stores. Kevin then asked how much it was costing them to open up a new store.

He was told that it was costing around $500,000 to $600,000 to open the new stores. He was also told that there are around 6 beds in a store meaning that with that money, a store with a front office and some beds was ready for business.  Lori then asked for confirmation on whether they made the devices or not. It was confirmed that the devices were being made by another company and Urban Float did not have any patents relating to the company.

Matt Higgins then inquired about their sales model. He was told that they have a monthly subscription model that charges $150 per month.  Kevin then asked them what profit they would make that month and he was told that they were looking towards a profit of $2,500,000. Their cash flow would be $600,000. 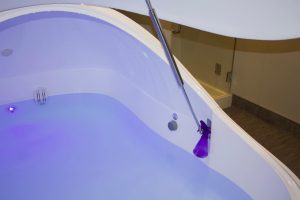 Kevin then looked at their valuation of $10,000,000 and agreed with it. Lori told them that Kevin rarely said such positive things and Scott and Joe agreed.  Kevin then asked them about their debt and was told that they had around $1,000,000 in small business administration debt.

Kevin said that he was offering the same but he had given an offer with a different structure. Scott asked Kevin whether he was willing to do a straight debt deal. A straight debt deal is a deal where the parties agree on a certain amount to be paid on demand or at a certain time. This would have removed Kevin’s interest.

Mark Cuban asked Scott how much he would offer Kevin to do a straight debt deal. Scott proposed 2.5% which Matt Higgins thought was a low amount. He thought that they were underestimating what it would take to expand and what the expansion would mean. However, he was going to do it for them.

Matt wondered why they were so afraid to give a larger portion of shares because if they had him as their partner, they would have a more reliable source of capital. Scott then offered Matt 7.5% equity. Daymond told Scott to consider that Matt was bringing a great deal of value to the company.  He would have to pay an annual fee of $1,000,000 to one of Matt’s companies just for marketing.  Lori tried to convince them to take the offer as well.

Scott then offered 10%. He begged Matt to accept it and Matt made him a final offer of 12.5%. Scott accepted the offer. Scott said that Matt was bringing a great amount of value through his experience with sports and it was worth the 12.5% that they offered him. 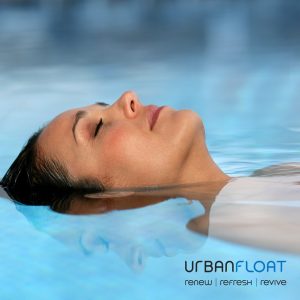 Urban Float enjoyed a tremendous amount of exposure just from the Shark Tank episode.  When the episode aired, there was an increase in awareness by 60-70%.

It has expanded and has 4 branches in Seattle. It has also opened branches in Tacoma, Vancouver, and Washington with a branch in each state. They have added other services such as the infrared spa. The infrared spa can be used to boost the immune system as it raises core body temperature.

Urban float records a profit of more than $1,000,000 annually. It also has a very strong social media presence with more than 9,000 followers on Facebook. Although the investors were afraid of the large share that the sharks asked for, it is proving to be well worth it in the long run.