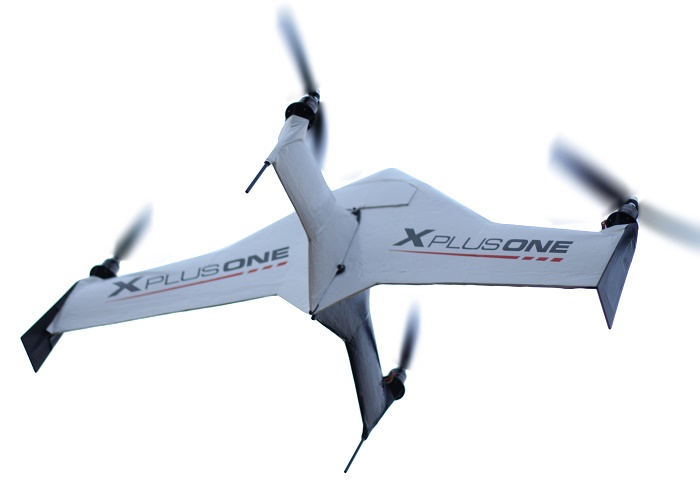 If someone were just introduced to the idea of start-ups, venture capital, and entrepreneurship, Shark Tank would take them by surprise. After all, start-ups are all in the tech sphere, pushing emerging technologies like augmented reality and machine learning. Their employees are hoodie-wearing, Red Bull-drinking coders. They live in the Bay Area and prioritize social media marketing over sales or business plans. The public vision of a start-up is The Social Network. By and large, Shark Tank is pet food and potty training products. To be sure, there’s plenty of variety in Shark Tank pitches, but it’s rare that an idea checks all the boxes for “cool”. XCraft is the exception.

XCraft is a mass market developer of innovative drone technology. Its main product, the X PlusOne, combines the hovering ability of a helicopter with the speed of a plane. A smaller drone that makes full use of features common to most smart phones is slated for a launch in the fall of 2016. By taking advantage of the recent developments in unmanned and autonomous flight, as well as increasing camera quality and accessibility, XCraft hopes to take the drone market by storm.

With such cutting-edge technology, they needed an experienced team. JD Claridge, the CEO, is an aerospace engineer with experience at Volant Technica and Quest Aircraft. Charles Manning, XCraft’s co-founder and chief evangelist, is the CEO of Kochava, a leading mobile analytics company. The diversity of the team goes beyond JD and Charles. Their COO, Andrew Cook, is a Bitcoin investment expert. They have several engineers, a former Marine, and a production manager fluent in Chinese.

As if it’s any surprise, XCraft “got off the ground” with a foray into crowdfunding. The project launched in late 2014 with a funding goal of fifty thousand dollars. After a month-long campaign, XCraft raised almost three times this amount. Backers pledged an average of $545.25 for a variety of perks, including pre-orders of the finished product, development kits, accessories, and intermittent progress updates.

However, Kickstarter is rarely enough investment to sustain a business of this size. R&D costs, as well as building inventory and hiring employees, mean a greater need for venture capital. With hopes to push out new innovative products and expand drones into a variety of consumer applications, JD and Charles will need more funding. XCraft has validated their business with the crowdfunding campaign, but will that be enough to change the minds of the often-conservative sharks?

JD and Charles entered the tank in style, flying the X PlusOne into the room ahead of them. After a smooth landing, they compared the emerging drone market to the dawn of aviation. The Wright brothers changed how people thought of transportation by pioneering manned flight. Drones were doing the same unmanned flight. The X PlusOne was a drone redefined. While many traditional drones offered hovering options, the ability to convert into a plane gave the product far-ranging applications. From filming a moving vehicle to covering a greater distance in a single charge, the X PlusOne could do it all. It could even seamlessly convert between its two modes mid-flight and be programmed to follow a specific flight path. For twenty percent of XCraft, JD and Charles requested a five hundred thousand dollar investment.

Daymond and Robert wanted to scout out any red flags early on. The business partners responded to questions about the X PlusOne’s flight range by citing autonomous flight options. A flight path could be programmed ahead of time, so users wouldn’t have to follow it around with a controller. Amazed, Robert wondered if this was legal. Regulations stated that users must respect other aircraft, keep the X PlusOne within line of sight when used for recreational purposes, and fly below four hundred feet. Otherwise, it was all legal.

Next, the sharks inquired as to its viability. At a price point of eighteen hundred dollars, would it be difficult to find a target audience? JD brought up the Kickstarter campaign, as well as another thirty thousand dollars in pre-sales, as product validation. The co-founders also brought up their shared history in aerospace engineering and software. This experience contributed to both the construction of the product and development of flight plan software.

Satisfied that JD and Charles were the real deal, Kevin gave some advice on applications. A managed forest area on his thirty-six-acre property had to be periodically examined for diseased trees, so looked into drones for this purpose. He wondered if camera capability had been considered for the hover mode, and JD claimed that this was in development. He also took this opportunity to show off the PhoneDrone, XCraft’s second product. The device is a small collapsible chassis that holds the user’s smart phone. It takes advantage of the accelerometers, gyroscopes, GPS, connectivity, and cameras of smart phones to create a portable and consumer-friendly experience. The PhoneDrone was expected to market for three hundred dollars, with a production cost under one hundred.

Robert wanted help framing the business. Again, who was the target audience, and what was XCraft’s “secret sauce” to differentiate it from competitors? Charles cited the intellectual property behind the designs of both products, as well as licensing opportunities, which Kevin called “music to my ears”. For a moment, XCraft seemed too perfect. Why did they need the sharks? While investors are most often repelled by early-stage start-ups, they also resist jumping on the wagon too late. JD said that half of the money would be used to scale production to reduce costs and the other half would be used to finish development of PhoneDrone.

Already recognizing the value of this market, Kevin showed initiative by making the first offer. For twenty-five percent, Kevin offered seven hundred fifty thousand dollars. Predicting a “nasty, nasty shark fight”, Daymond entered the negotiations at a million dollars for twenty-five percent, which Kevin immediately matched. Lori offered an even better deal, a million dollars for twenty percent, which Kevin also matched. In under two minutes, the value of the business had doubled to five million dollars.

Before a brutal bidding war could emerge, Robert advised that they step out to discuss things in the hall. Before they could form a cartel against XCraft, Charles had a proposition. He made the first move by suggesting a cooperative venture between the sharks, a sort of syndicate. However, JD nearly killed their chances with the valuation. JD saw the doubling of XCraft and wanted to recreate a miracle. He asked for a ten million dollar valuation. For reference, the sharks often cut their individual investments for the added value of more expertise.

Daymond began to express reservations, calling the tactic greedy. However, he apparently still wanted a deal, tacking another million on to the previous highest offer. His ceiling was a six million dollar valuation. For Kevin, the floor was five percent of the company. At any lower equity, XCraft wouldn’t be worth his time. Mark had stayed silent throughout the negotiations, so Charles gauged his interest. With a smile and a “we’ll see”, they continued. At three hundred thousand for five percent a piece, Robert and Mark were both hesitant. Robert pointed out potential privacy concerns, and Mark simply wanted to hear out JD and Charles. After the two returned from a private discussion in the hall, everyone was ready to go.

Kevin, Daymond, Lori, and Robert signed on in rapid succession. Mark was the only hold-out. He wanted to build on the confidence of other investors. Surely, XCraft had fielded conversations with other parties? Charles answered that, yes, they had. However, most other parties saw this as nothing more than an early stage investment with high potential yields. They didn’t have the diverse expertise of the sharks, and they didn’t have the same reputation for execution. Robert agreed. “A lot of these VC [venture capital] guys…they’re smart, but they don’t get their hands dirty running businesses.” Apparently, this was the last piece of Mark’s puzzle. He accepted.

In an almost unprecedented move, every shark cooperated for a deal all parties were happy with. “You’re gonna own this market,” Kevin declared. JD and Charles were more than satisfied with the deal. They got a higher valuation, more capital up front, and five strategic partners to push their technology from every angle imaginable. Their success tells the story of a nearly perfect pitch. They had an innovative and demanded product, in an emerging field. They had outstanding sales, considering they were primarily raised in a one-month Kickstarter campaign. They had the technical background. Except for a slight tactical misstep of negotiating to aggressively, they did everything right. Any tech entrepreneur should look to the success of XCraft as a blueprint for success.

The Sharks never closed the deal with xCraft. That hasn’t stopped their success, however. As of February 2023, they are still in business though they have discontinued their retail products to focus on manufacturing drones for enterprises and military units. From what we’re able to gather, they currently have a valuation of approximately $17 million, which is a significant increase from when they appeared on Shark Tank ($6 million).

A Kickstarter campaign was also launched for their phone drone project, which successfully raised over $170,000, which was significantly higher than their initial goal of $100,000. They’ve managed to secure investment from various venture capitalist firms as well including Meyer Equity and Mountain Man Ventures. In addition to that, they raised over $1 million with a StartEngine campaign.

Panadrone: Capable of flying up to 400 feet, this drone is capable of capturing high-resolution video. Not only that but it can also be used as a mesh network node.Simply select your desired altitude on the included tablet and press the ‘launch’ button. The nest lid will automatically open and the Panadrone will be airborne. For those who are interested in a live demo, you can request one from their official site.

Matrix RTK: Designed for surveyors and engineers, the Matrix RTK is perfect for those who want to capture high-res mapping images. It can also be paired with a GPS bay station for autonomous route precision.

Nano One: Their latest innovation, the Nano One is a wind and rain-tolerance drone that’s designed for militarily surveillance. Ultra-portable, it comes with auto return and lost link failsafe features to preserve mission success.

Shadow: This unmanned aerial system is capable of tethered flight for up to 24 hours and can be flown to an altitude of 100 feet. It also comes with an emergency backup power system, which will ensure its safe return even if there’s a power system failure.

Matrix SE: The Matrix SE comes with an Android tablet and SUI controller. Not only does it come with a 4K camera with 3.5 zoom, but it also features Thermal, LIDAR, EO, IR, and Multispectral payloads.

Maverick Mapper: The Maverick is perfect for scouting. Featuring a Skydroid controller, it can autonomously map up to 40 acres in 25 minutes.