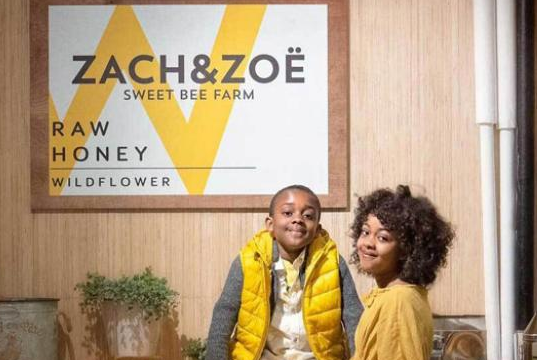 Kam and Summer Johnson are the owners behind Zach and Zoe Sweet Bee Farm. After moving to Hunterdon County, they noticed that their youngest child, Zach, suffered very bad seasonal allergies on top of asthma, which worsened in the Spring and Fall seasons. Wanting to alleviate his symptoms, they sought out a number of natural remedies (they’d always been cautious about using medications).

And they eventually decided to try raw honey after reading about its many benefits on preventing allergies- that it’ll expose the body to the various allergens so that over time, they’ll trigger less of an immune response.

Upon trying raw honey, which they purchased from local beekeepers, they noticed a huge difference in their son’s allergies. Intrigued, they began reading more about beekeeping. And after months of research and coaxing by friends, they decided to get into the hobby; they also chose not to use any additives or pesticides so that they would get pure, raw honey and nothing more.

Wanting to expand their operations (beekeeping isn’t cheap, after all), they began seeking opportunities and with a bit of luck, found themselves auditioning for ABC’s Shark Tank. They were eventually featured in the 7th episode of the 13th season.

Dressed in yellow, the Johnsons walk into the tank. Once they’re inside, they introduce themselves and let the panel know that they’re looking for $150,000 in exchange for a 10% stake in their company, Zach and Zoe Sweet Bee Farm.

Right away, Zach and Zoe dive into their pitch. They tell them that most commercial kinds of honey sold in supermarkets are extensively processed, which removes a lot of the nutrients. Not only that but many also contain sugar and corn syrup. In contrast, the honey from their farm is raw and unfiltered; they don’t contain any pesticides or additives. As if on cue, the camera zooms in on the jars of honey next to them.

Kam goes on to add that they offer many flavors of honey, all of which are blended with superfoods, “from ginger to matcha to beetroot”. He also emphasizes that everything is made in-house and that they do not use a co-packer.

With that, Summer tells their backstory- that they had started the company by accident after trying to solve their son’s allergies five years ago and that they found raw honey to be a game-changer. She then goes on to talk about the health benefits of pollen.

Their daughter Zoe goes on to say that they farm all of the honey themselves and that they had started out with just a few hives and have grown it to a full facility. As she continues, a video of their bee farm starts to play on the screen beside them. Kam also takes the opportunity to emphasize that the quality of their honey and the health of their bees are super important to them.

Zach then ends their pitch by asking which of the sharks would like to “join [their] hive of busy bees.”

Gesturing toward the jars in front of her, Lori asks whether or not they made all of the different varieties of honey, to which they say yes. Summer also lets her know that all of their honey is created in a facility in Lebanon, New Jersey, and that they’re currently taking care of 50 hives. She also reveals that they source a lot of their honey, about 80%, from local farms right by their doorstep.

As she says all this, the sharks do a quick taste test of the different kinds of honey. Guest shark Daniel then asks how they became bee farmers. Summer reiterates the fact that Zach had terrible allergies- ones that sent him in and out of the hospital- and that raw honey was the only thing that had helped. Because of that, they started beekeeping and before they know it, his symptoms had started to go away.

Mr Wonderful goes on to ask about the different kinds of honey that they’ve already tasted. Summer says they wanted to add an extra flair to the honey so they began adding organic superfoods.

Mark praises the blueberry-flavored honey and says it tastes phenomenal. Lori goes on to ask whether or not the products have been in restaurants as she’s seen them before. The Johnsons tell her that they have, and that they’ve been picked up by multiple retailers including Macy’s and Bloomingdale’s and that they’ve also been featured in The New York Times.

Holding a jar of honey in his hand, Mark asks about the price as well as the production costs. Kam explains that their 16-ounce jars cost $6 to make, wholesales for $13, and retail for $20. With that, Barbara asks how their products compare to those of other honey makers in terms of price. Summer tells her that they’re a little more- about $15 per 12 ounces. Asked why their honey costs 25% more, she states that it’s because their honey contains organic superfoods from the best farms.

Kam goes on to say that they’ve just been accepted to Target’s 2021 incubator program and that they plan on doing $1.5 million in sales this year. This piques Mark’s interest, which prompts him to ask how they plan on making the jump from $888,000 to $1.5 million. He also asks whether or not they’re profitable, to which the Johnsons reply yes- that they have 23% margins.

Daniel is the next shark to speak; he tells them that he buys tons of honey in his industry and that bee colony collapse has been a major problem. He finishes by asking about their role in that ecosystem. Kam tells him that them having bees is a differentiator- that they currently have 50 hives and do a lot of talks around beekeeping and bee health.

Mr. Wonderful then jokingly asks Zach how he feels about selling the bees’ hard work. He answers by saying that all beekeepers have a rule not to take a certain amount of honey from the hives, which earns some cheers and laughter from the sharks.

However, Mark is unsure whether or not they’ll be able to deal with the complexity that comes with adding such a huge customer (Target) so early in their life cycle, and for that reason, he drops out.

Daniel also drops out, stating that it’d be difficult for him to fit into the company as “it seems very much like a family business”. Thanking the sharks for their time, the Johnsons attention turns toward Lori, who reveals that she actually doesn’t eat honey. She also drops out of a deal.

Kevin goes on to say that they remind him a lot of Wicked Good Cupcakes, who had recently sold the business to Hickory Farms for millions of dollars. He then makes them the exact same offer that he made to them nine years ago when they were in the tank- $150,000 for a $1 royalty per jar sold until $150,000 is paid, then the royalty drops down to 25 cents in perpetuity. He also emphasizes the fact that they were able to work together to blow up sales, which allowed them to have commercial kitchens all over the country.

Before the Johnsons can reply, Barbara states that she also has an offer and that she’s willing to give more than what they were originally looking for, but for more equity- $200,000 for 20%. She also highlights the fact that she’s an excellent marketer who’s great at building brands.

As the family contemplates on what to do, Daniel asks whether or not they’re thinking of Kevin’s royalty deal as that would mean they’d have to add 13% to every jar they sell at the beginning. As he’s saying that, Barbara gets out of her seat and joins the Johnsons in the center.

Kevin jokes that he has no interest in doing a deal with her in it. He then asks the Johnsons whether or not they’re willing to part with 20% of their equity as that’s what would happen if they take Barbara’s offer. The family responds by saying that they need to huddle and Barbara jokingly joins them. Fortunately, however, they’re given a chance to huddle on their own after a while.

After some contemplation, the Johnsons step back into the tank with a counteroffer for Barbara – $200,000 for 12% equity. She thinks about it for a moment before letting them know that the best she can do is 15%. The Johnsons contemplate the offer for a few seconds before accepting.

With that, Barbara steps up to give each of them a hug. The rest of the sharks also give their congratulations.

It’s only been a few months since the Johnsons appeared on the show. As far as we can tell, the deal that they received from Barbara is still under due diligence. From the looks of it, however, they seem to be doing fairly well. For one thing, sales from their website went up significantly after their segment aired.

Alternatively, you can get their products at one of their many retail partners. Simply enter your address or zip code on their store locator page and you’ll be able to see those that are closest to you.

For those who are thinking of giving their honey a try, you can check out their website here. You can also follow the company on social media. They post on Instagram (@zachandzoehoney) and also have an official Facebook page, where you can read customer reviews (they currently have a 4.4-star rating across 49 reviews).