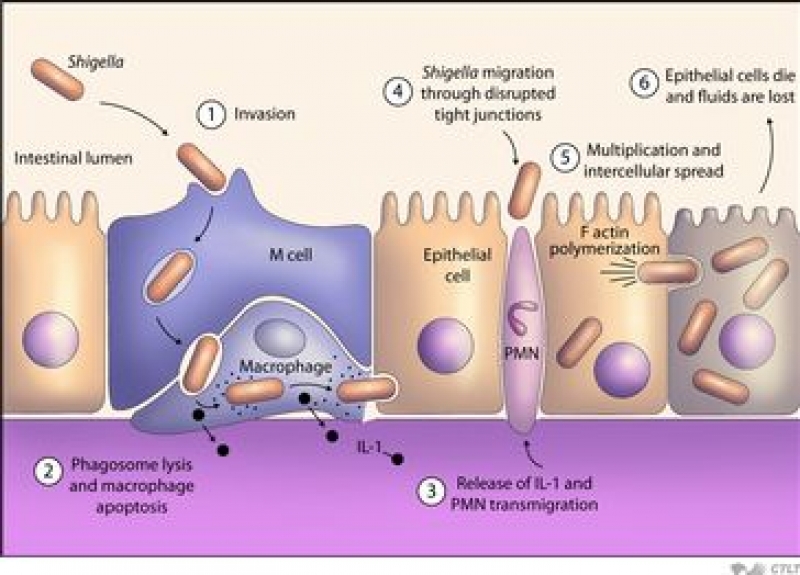 The Center for Disease Control and Prevention is putting out a warning after the Shigella bacteria entered the United States, causing many different outbreaks of food-poisoning across the nation. The food-poisoning, which is known as shigellosis, has now produced a strain that is resistant to antibiotics, which means that it is harder to treat with standard medicine. This is not the first strain of bacteria that has become resistant to oral antibiotics, so while this is very serious, you shouldn’t be writing your will just yet.

More than half a million people in the United States become infected with shigellosis every year, but since this strain is unable to be treated with oral antibiotics, more severe complications are being seen. When oral antibiotics stop working, stronger antibiotics have to be given via intravenous lines, but the person must make it to the hospital to get the IV put in. Shigella is a bacteria that is similar to dysentery, which means it affects your intestines, and can lead to severe diarrhea. You will also get extreme abdominal cramps and vomiting, and you will see mucus, blood, or pus coming from your mouth and anus. There have been 243 people who have gotten sick with Shigella in the past year alone, and over 32 states have seen outbreaks that vary in size. 20 percent of the people in the United States who get this bacteria have to be hospitalized, especially since the risk of dehydration is so high due to the vomiting and diarrhea. Massachusetts, Pennsylvania, and California are the three states that have seen the most people diagnosed with Shigella.

The reason that outbreaks become so rampant is because it is a highly contagious bacteria, with only 10 germs needed to spread the bacteria from one person to another. The germs can either be found in the water or in the food supply, so if one person is infected, and then prepared your meal, you have a high risk of getting the infection. What is even more concerning is that it appears the drug-resistant version of Shigella was brought over from Morocco, the Dominican Republic, and India, which means it used to only be associated with people who traveled overseas. However, since the infection has now spread to the United States, you can get Shigella even if you have never traveled outside of the United States, and this posts a great danger to domestic travelers. This is very dangerous, especially for Americans who are living in close quarters, such as those living in homeless shelters or in a daycare or childcare program. The homeless groups in San Francisco, CA, have already been through one outbreak of this bacteria.

While it might seem like this bacteria could easily wipe out all Americans, you do not need to worry that much about the Shigella outbreak. This bacteria is still treatable with certain medications so it’s not like there are no options available, and often times it will clear itself up within a week or two. You will have to ensure you get to the hospital if it doesn’t get better though, since it can spread throughout your blood, and that could cause you to die.

In terms of how you can keep yourself safe and stop this from getting into your body, you should always wash your hands before eating foods, even if you prepare them at home. Always take precaution when eating at a restaurant, such as making sure the food is cooked properly, and that hand-washing procedures were followed by the cooking staff. You also should make sure you are eating right, which can help ensure your immune system stays strong, and this will also help prevent infections. Most importantly, just practice overall good hygiene and make good food choices, as this is something only the more vulnerable populations are susceptible of contracting.