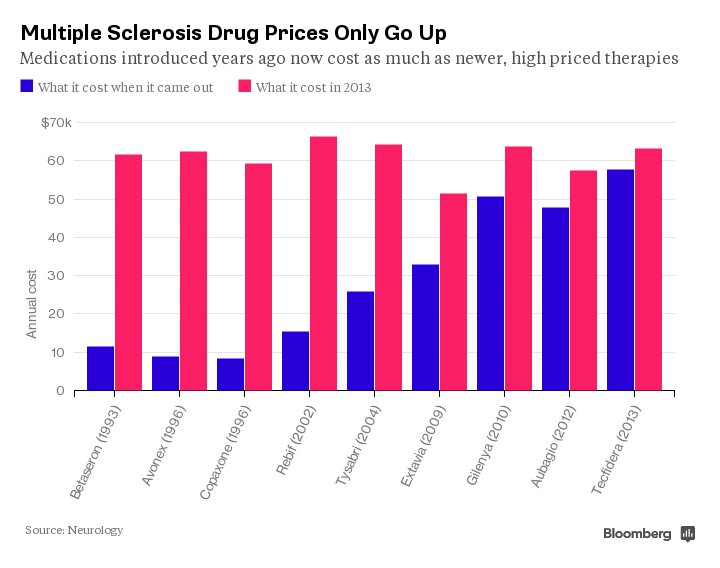 A new paper that was published in the Neurology journal is showing that even after several years of being on the market, multiple sclerosis drugs are increasing in price. The very upsetting part about this research is that even while new multiple sclerosis drugs are coming out, the drugs that have been out for over 10 or 15 years are still increasing in price, and this is harming those who are suffering with the disease. 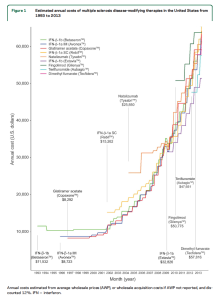 If you have not heard of multiple sclerosis, it’s a nervous system disorder that is chronic, and impacts over 400,000 Americans. Some of the most common symptoms of the disease include vision problems and difficulty moving, such as having a hard time moving your extremities or walking. It was not until the 1990s when the first multiple sclerosis drugs were approved, and back then the cost was between $8,000 and $12,000. However, over the years there have been more drugs that have been approved and used to treat the disease, although currently no generic versions of these drugs have been made. You would think that the increase in supply, which would drive down demand would allow costs to decrease, but that is not the case with these drugs. Instead of prices going down as the market becomes saturated with these drugs, the prices of these older are going up significantly, and several doctors are calling for change.

Dan Hartung, who is the lead author of the study, decided to look into this fiasco after two neurologists at Oregon Health & Science University were having issues with getting the multiple sclerosis medications needed for patients. There have been several new drugs come out, but the prices for the old drugs are often increasing faster than the drug prices. The research was looking at the wholesale prices of the drugs, which is like the list price of the drugs. When you have a health plan, they will often times negotiate the list price, which means they are getting a huge discount on the drugs. All of the drugs available now are about $50,000 to $65,000 each year, which is huge considering some of these drugs were less than $10,000 when they were first approved. The paper did leave one drug out because it’s rarely prescribed to patients over safety issues, and did leave out two other drugs that just hit the market, because data was not available on that yet.

The findings of the paper also shows that three specific drugs, Bayer’s Betaseron, Biogen’s Avonex, and Teva’s Copaxone, all tripled in sales in 2014. These three drugs were approved in the 1990s, and back in 2006, had a sale total in the United States of $2 billion. Looking at 2014 sales numbers, researchers found that the drugs ended up with $6 billion in sales. The researchers used the Bloomberg Intelligence Data to get this information, which shows what the wholesalers charge the pharmacies for the medications. So in 8 years the three drugs tripled in sales, which makes no sense because they are older drugs and newer treatments and drugs have been approved since then.

The really sad part about this is that people who have multiple sclerosis are often on medications for many years, since there is no cure for the disease. The older drugs are often the most prescribed medications, so the significant increase in price really harms the patient. It’s not clear what is causing the price of the drugs to go up so much, but these drugs are in a class called biologics, which are a more expensive class of drugs to manufacture. The most common drug used to treat multiple sclerosis, which was approved in 1996, did $3.4 billion in sales in 2014, and it’s the best selling drug for the disease out there. Several doctors are outraged about the prices of these medications, calling for changes to be made, especially on the older medications that are the most commonly used for the disease. It’s not known what can be down to cut costs, especially since it’s not known what is increasing the costs. A new generic version was just approved, so the hope is that putting generics out there will help cut some of the costs, although that is only one generic medication out of several that can be prescribed for this disease. So far two doctors out of Canada have written editorials in the paper beside this research study calling for lower prices for multiple sclerosis drugs. The two doctors are saying that this is clearly a money-grabbing situation by the drug company, and that it’s essentially despicable what is going on.