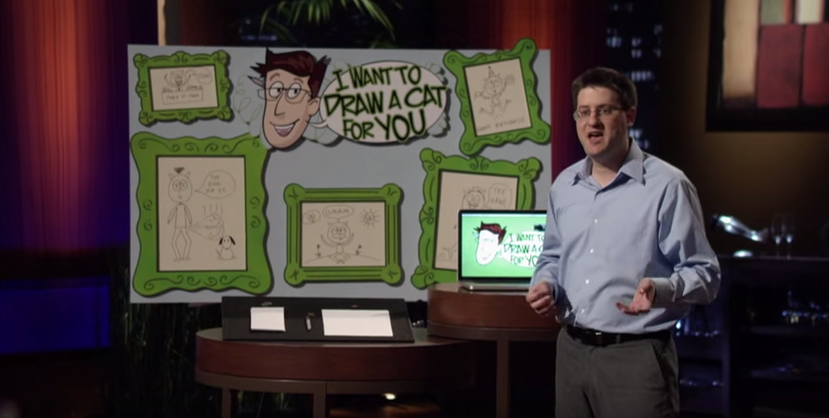 I Want To Draw A Cat For You before Shark Tank

I Want To Draw A Cat For You was an idea started by Steve Gadlin that he came up with in his bathroom. Being a creative guy, Steve had come up with loads of different ideas throughout his life, but saw an actual demand for people wanting cat drawings and decided to start a business out of it. Having a background in the tech space helped Steve get the company off the ground as he was able to build a successful website and grab attention from media outlets. Although Steve did not have amazing numbers or something proprietary, he felt the Sharks would invest in him and his creativity so he applied to be on the show and was invited for season three.

I Want To Draw A Cat For You on Shark Tank

Steve entered the tank seeking $10,000 for 25% of the company. Music started playing from the background as Steve began singing the Sharks a song about the business! It described how users could purchase cat drawings from his website and he even added a funny dance at the end which he described as his “signature move.” Steve began to sell the Sharks on the idea by mentioning there is an economy “for stupid.” Customers give Steve a situation and Steve will provide a cat drawing in relation for $9.99 of which $9.23 is profitable. Steve mentioned that people buy these because they want to see their crazy ideas in a drawing and the drawings come up on his website which the customers love.

Kevin was concerned with the scalability of the business as Steve has to draw every single picture. Steve mentioned he could do about 1,000 a week and that the huge margins pay for the company’s growth. Robert was interested in the numbers and the future of the company. Steve stated he had sold over 1,200 drawings in a year, that he wanted to use the money to grow his e-commerce, and this creative mindset along with the Shark’s business background would allow them to turn his other ideas into billion dollar businesses. Steve also sold the Sharks on his marketing skills such as getting press attention from Groupon and selling nearly 1,000.

Kevin, like always, was also concerned with Steve being a “one man show” because the business would die if anything bad happened to Steve. Because of this and not seeing the company as an investable business, Kevin went out. Robert was concerned with the sales as Steve had used tons of free media outlets, but only profited around $7,000 and because of that went out. Mark immediately jumped in and offered Steve $25,000 for 33% if Steve took the offer right there as Mark felt the other Sharks “didn’t get it.” Steve hesitated for a bit as Daymond and Barbara tried to tell him to wait, but Steve said he would take the offer if Mark would draw one if every one thousand cats which Mark agreed to. Mark went up and congratulated Steve as he joined him on the dance from earlier. As Steve left, Mark mentioned that it is hard to find talented people like Steve which is why he invested.

I Want To Draw A Cat For You After Shark Tank

The deal with Mark and Steve successfully closed after the show and the Shark Tank effect kicked in. As Mark helped Steve with his website, Steve was getting thousands of emails from customers who eagerly wanted to buy a drawing. Mark also mentioned he was easily making money off the business and that the others Sharks not seeing potential in entrepreneurs like Steve is why they miss out on great deals.

Steve has drawn over 19,000 cats since airing on Shark Tank almost five years ago. Steve also started a bunch of new ideas such as I Want To Write A Song For You. He called his entire company “Blewt” which Mark also owned 33% of, but a lot of the other ideas have not gained as much attraction as Steve’s original cat drawing business.

At the start of 2015, Steve was going to close his business because of a new successful idea he had called “Steve Gadlin’s Star Makers”, a television show based on bizarre talent. Steve was able to raise $20,000 from Kickstarter for the idea and felt continuing his current cat drawing business would contradict with the time he would have to put in for to make the television show a success .

Does I Want To Draw A Cat For You still exist?

Despite the mention of Steve closing his original business, Steve’s cat drawing company still exists and requests for drawings can still be ordered from his website http://iwanttodrawacatforyou.com. However, he has raised the price of each drawing to $29.99 with the intent to have more free time for “Steve Gadlin’s Star Makers.”  Keeping the cat drawing business alive has likely pleased Mark as Mark can continue to profit and even draw cats himself once in a while for customers.

“Steve Gadlin’s Star Makers” has taken off with a second season currently underway. Steve has proven his statement of being a creative guy who is willing to take the risks. After learning a lot about business from his original idea and keeping his hunger for making ideas a reality, it is likely that Steve’s new business can continue and become successful as well.