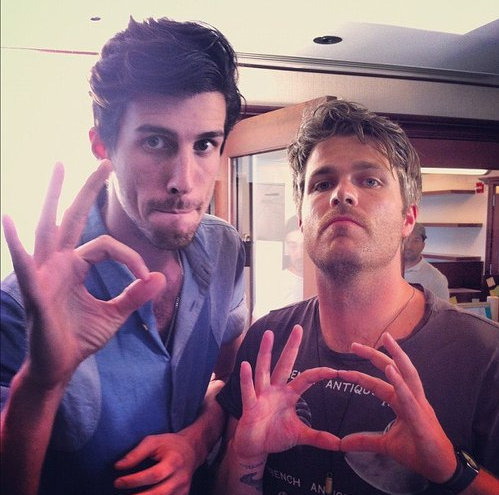 What ever happened to the 3OH!3 duo?

Most of us know at least one song by the electronic duo 3OH!3, with titles like “Don’t trust me” to “Starstrukk” from their album Want with a collective 50 million plays on Spotify. The band was born in 2004 and is made up of Sean Foreman and Nathaniel Motte. They named themselves after the area code of Boulder, Colorado – 303 and released their first self-titled album: 3OH!3 in 2007, by 2010 they were successful enough to work with personalities including Katy Perry and Ke$ha.

How did 3OH!3 become famous?

Sean Foreman was born in Boulder, CO and attended Fairview High School. He graduated college from University of Colorado Boulder with an English major and math minor. Nathaniel Motte however attended Boulder High School and the University of Colorado at Boulder graduation with a major in Environmental, Population, and Organismal Biology. So far, the two couldn’t be any more different, attending different high schools and taking juxtaposing degrees and so far with no musical background. So how did the two become so musically adept?

We know that Nathaniel took piano lessons from a young age and began to DJ at the age of 18 playing at many of Boulder’s local bars and clubs, whereas Foreman’s history is more orientated around being a songwriter, especially considering he co-writes all of 3OH!3’s music and has worked with and written songs for artists such as Lil Jon, Katy Perry and Icona Pop. Foreman’s explanation on this situation was “Every time I work with an artist like Ke$ha and It Boys! It’s a huge achievement and we’ve had so much fun working on every session whether the song blows up or not.” Maybe one of their keys to success was that they didn’t aim to be successful and that the lack of pressure was the core to their unique sounding creations.

3OH!3’s first release was an album named after themselves (how original) 3OH!3. The album only had one hit song single in the mix ‘Electroshock’, however this was enough to give the public a hint of their music and led 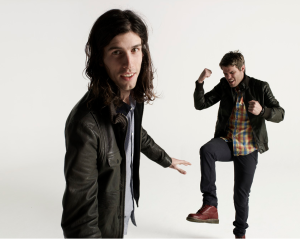 to a demand for their music. This then led on to the signing of a record label – Finish Records, a smaller division of Atlantic Records. The band then recorded their second, most successful album ‘Want’ which achieved a gold award for record sales.

The album ‘Want’ was then released in early July of 2008 and had far more success than their previous album. It broke the top 50 albums on the coveted billboard charts, propelled by their song Don’t Trust Me which was a top 10 radio hit and ended up being the highest rated song of all of 3OH!3’s career!

Piggybacking on this success they later released a remix to their song Starstrukk with pop icon Katy Perry which also charted in the top 10 in Europe. Again capitalizing on this success 3OH!3 signed on for all venues of Warped Tour 2008. The band then performed in Panama City Beach, Florida for MTVU’s Spring Break and also during 2008 they also performed at Reading/Leeds on of the UK’s largest festivals.

The next album to be released was ‘Streets of Gold,’ being much less successful than the prior album, yet still creating one great hit ‘My First Kiss,’ featuring another pop icon in Ke$ha.

The downfall of 3OH!3

One of the problems that could have occurred is that they didn’t full take advantage of their time in the open, like many other artists have done to maintain their name in the spotlight. For example, it took two years for their next album “Streets of Gold” to be released yet only produce one successful hit and then it took a further three more years to release their most recent album. The band recently stated on their website they are the kind of band who are still making albums and not repetitively pumping out one song after another, so the process may take a couple years for the effort input to pay off, leading to the band taking too long to satisfy their audience.

When Streets of Gold didn’t return a positive response – receiving a 48 Metascore by critics and an even lower 39 by users, the band, in an attempt to relive the memories of the ever successful album WANT, they decided not to work with any big studio or producer to get back to their roots to recapture the magic of 3OH!3’s humble foundations. This may give the band a unique style but it may have led to a lack of publicity and the right marketing for the album. Foreman claims that one of the key factors to the success of the band was “That love of music without all the pressure has always been at the core of our sound and we never want to lose that.”

Many reviews given through various websites all seem to have one common feature, this feature being in general, the music becomes repetitive. Knowing this leads to a theory that their first popular album was as successful as it was because of its individuality in comparison to the other major song producers at the time, it then however became stale after a period of time to which the music then became an annoyance.

Where are 3OH!3 nowadays?

On a more personal scale Sean Foreman is surprisingly a world renowned ultimate frisbee player which may come as a surprise to some. Additionally he appears to lead an extremely active lifestyle doing cross country bike rides and running in marathons.

As of 2015 the band has been talking about potentially releasing new music next year. This was further exasperated by a tweet Sean posted at the beginning of November that informed fans to add him on snapchat for a background sneak peek at their latest music video. A large amount of hints hinting to the release of their new album through social media platforms have recently been removed leading to even more questions.

So who knows where the band is headed, whether they’re still stuck in a downward slump or whether they can rethink their creativity and come back with another hit album.