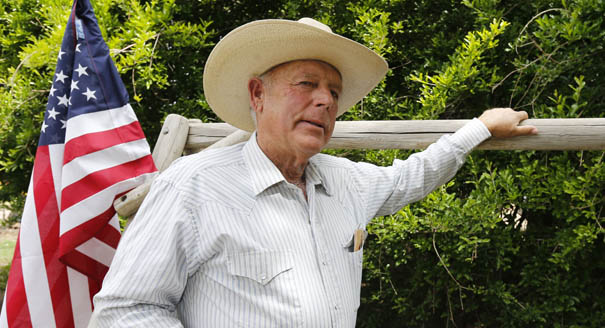 For almost twenty years Cliven Bundy waged a one man war against the Federal Government over his grazing rights. The nearly seventy year old rancher has claimed since 1993 the ancestral right to allow his cattle to graze on federally owned land close to his Nevada Ranch. The confrontation came to a head in 2014 when armed militia men came to his aid against federal agents who had come to confiscate his herd.

Cliven Bundy Before the Incident

In the years leading up to the incident in March 2014 Cliven Bundy’s herds had grazed on the lands surrounding his ranch. He had always paid the fees required too but in 1993 the Bureau of Land Management placed tighter restrictions on the land, in a measure meant to safe guard the then endangered desert tortoise.

Cliven Bundy refused to pay the new price and continued to allow his cattle to graze in the Bunkerville allotment. He instead submitted a check to the county government, who returned it citing a lack of jurisdiction. The BLM fined him, the first of many fines. Bundy would maintain that the federal government does not truly own the land and claiming that he abides by no federal laws, calling the State and the sheriff the highest law in the county.

His case bounced around several courts since then losing every time. Still he refused to pay the fines or the permit fees. It is estimated that the total amount owed by Cliven Bundy is in excess of a million dollars. Four times higher than all the other ranchers under BLM jurisdiction combined. In 1996 the BLM attempted their first removal of the cattle by force but were told to back down after threats of violence.

This came to a head in 2013 when a judge from the Nevada court system ruled against Bundy and banned his cattle from the land.  The Federal Government was then authorized to forcefully remove the cattle from the area. Using horses and a small helicopter the BLM succeeded in penning almost four hundred trespass cattle in April 2014 and arrested Cliven Bundy’s son David. Later that month they confirmed that two of the heads had to be put down due to safety fears. Though this move was criticized from within. The round up was suspended due to renewed threats of violence.

Cliven Bundy posted a message on the ranch website stating they have his cattle and his boy, Range War begins tomorrow. Protesters began assembling over the following few days and confrontations with the BLM escalated. Bundy’s other son, Ammon, was rightly tazed by police for not complying with an order to back off and kicking one of their dogs.

As the week wore on more and more supporters arrived, many of them members of Sovereignty groups and many of them armed to the teeth. On April 12th the BLM were forced to back off. The situation was getting out of hand, with itchy trigger fingers on both sides of the argument it would be only a matter of time before shots were fired. It is claimed that the groups supporting Bundy had snipers over looking the freeway and had plans to place unarmed women on the front lines, remarks made by a member of the protesters Richard Mack.

The response to the situation was mixed. Some called Cliven Bundy a terrorist, an easy comparison to make seen as he rejects all aspects of the federal government and had an armed force go up against them. Others, mainly members of the Teaparty, lauded his example as a man standing up to a government that was over reaching it’s authority.

Public opinion of Cliven Bundy changed after the remarks he made at a press conference. Using the word “Negro” in reference to black people and asking whether or not they would be better off in close knit family communities of slaves than on welfare. How someone in this day and age could make those kinds of statements is lost on me and he was quickly condemned by even his most vocal supporters fro the remarks.

Over the last several months Cliven Bundy has been vocal in his condemnation of the actions the federal government has taken regarding the imprisonment of the Oregon Ranchers the Hammonds. Dwight Lincoln Hammond and his son Steven were sentenced to a short stay in prison for setting fire to land owned by the BLM. They served a sentence well below the mandatory state minimum and an appeal meant that they must return to prison for the remainder of their sentence.

Initially the Hammonds were happy to receive the support, from the Bundys and the militia men, but were quickly advised by their attorneys to reject it. They have and now just want to serve their sentences and get on with their lives.

The Hammonds continued incarceration sparked an occupation of the federally owned headquarters of the Malheur National Wildlife Refuge in Oregon, well named that place, by what I would describe as a paramilitary force on January 2nd 2016. Among them is Ammon and Ryan Bundy, sons of Cliven Bundy. Cliven has stated that he is unsure about what his sons seek to accomplish and questions what business the Bundys have in Oregon.

Ciiven himself has decided to rearm and reorganize his little militia for 2018. The Obama administration has designated land used by the Bundy clan as a national monument, leading to a fresh call to arms against this perceived governmental weight throwing. Most of the rhetoric seems to be coming from supporters of the Bundy clan, with the folks themselves simply saying that this move is about control, pure and simple. It looks to be another dangerous year out in Nevada, expect another standoff at some point folks.

Barry W Stanton
Irish born writer who drinks too much caffeine and reads too much Terry Pratchett. I enjoy long walks on the server and Korean cuisine.
RELATED ARTICLES
US