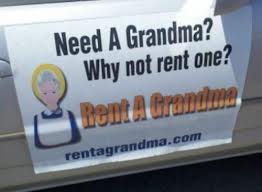 Todd Pliss was formerly a tutor for rising new stars, such as the Jonas Brothers. While working with these children who were trying to manage fame and schoolwork, he encountered quite a lot of complaints from parents. They seemed to keep encountering the issue of finding reliable child care. Typically parents will hire a teenager from the neighborhood or maybe a college student who was looking for a way to earn some extra money on the weekends, but more often than not, these teenagers and young adults are not that trustworthy. Pliss recognized the issue and decided to take matters into his own hands by starting up his new business, Rent a Grandma.

His idea was to find older women who have a lot of domestic experience under their belt. This way when parents were looking for babysitters or what have you, they would know that the person they were hiring would be completely reliable. Pliss was so convinced that this idea would work and become successful that he closed down his tutoring program in order to begin interviewing potential “grandmas” to work for the business. However, now he wants to begin franchising the Rent a Grandma service, but in order to do that he is going to need some help. In hopes of finding a partnership and investment, Pliss heads over to ABC’s Shark Tank to see if one of the Sharks will bite on his strange new idea.

Pliss enters the Shark Tank seeking a $150k investment in trade for 25% of his business. Then he jumps into his sales pitch by displaying a teenage laying on the couch with earphones in and her face in a cellphone screen. This is apparently what most young babysitters look like because kids these days are more concerned with their social media accounts than they are with the child or children that they are supposed to be watching. Standing in contrast to the girl on the couch, Pliss has also brought with him one of the “grandmas” from his business. She is supposedly a far better caretaker for children because she care more about the well being of the child than what is going on on the internet. This is the kind of care that a child should receive while being watched, and to send that message home, he even has the older woman go around giving the Sharks some freshly baked cookies. That really emphasizes the grandmother stereotype.

All in all, Pliss came up with idea after hearing accounts of babysitting horror stories and decided that what people needed was a place to call older women who could be trusted with young kids. It has been about a year since he got his idea up and running. In total there are about 50 women working as grandmas for the business located in Los Angeles. They have also received a lot of phone calls and emails from people across the country stating that they too want to rent a grandma.

Even though people might be saying that they want to get involved with the business, Robert Herjavec wants to know what kind of actual sales they have been seeing over the past year. In total, the Rent a Grandma service has only made around $25k in sales. The pricing per hour for a grandma usually depends on what they are going to be doing, but they usually get paid anywhere between $14-$20 dollars per hour. What Barbara Corcoran wants to know is what it costs to hire other competition, such as college students or teenagers. Younger babysitters only ask for $10 to $13 dollars an hour, which is definitely less expensive, but Pliss argues that parents would want more experience and better care at a higher price and less reliable care for a cheaper price. 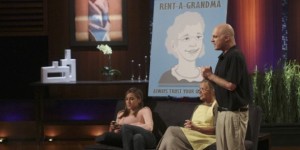 operational. When the grandmas take a job, the business takes 15% of whatever they earn for that service. This doesn’t seem to impress O’Leary, even as Pliss tries to ramble on excuses about how it really isn’t such a bad business endeavor. He brings up again that he has received a lot of requests for the business to begin franchising, but it doesn’t make sense to O’Leary why anyone would want it to being franchising when they have only made $25k in sales over the past year. What he then tries to explain is that these grandmas sign contracts that are no less than 90 days long, which means they usually make around $1200 dollars and get paid up front. However, what happens if the granny quiets or unfortunately passes away? With each contract there is a replacement guarantee of up to 3 grandmas. If a customer is unhappy with the first, they can simply ask for a different one to take over.

With this news in mind, the Sharks all laugh it over and Daymond John quickly decides that he is out and is not going to invest into the grandma sitting service. Herjavec also doesn’t see the potential for growth here because their current sales are so low. He too does not make an offer for Pliss. And even though Corcoran commends him for his creative name that she admits to loving, it isn’t the kind of business that she could really see herself becoming involved with. So unfortunately for Pliss, another shark is out of the water which only leaves him with two left.

O’Leary and Mark Cuban both think that there is potential in the business to grow and become successful, but that it is going to take a lot of time and money for it to get there. Cuban also just doesn’t want his name attached to a rental senior service, so he doesn’t invest. As for O’Leary, the numbers just don’t look so good right now which is why he can’t risk putting money into a business that has a high likely hood of failing. With that being said, all of the Sharks are out and Pliss has to walk away from the tank with no new investors for his brand new business.

Even though Pliss walked away from the Shark tank empty handed, he refused to give up on Rent a Grandma. He did abandon the idea of franchising because it just didn’t seem possible due to being far too complicated, but in placement of that, he started up a website that is similar to Angie’s List. On their website (http://rentagrandma.com/), people across the globe can look for older women in their area who are looking

for work. The grandmas who want to be featured on the website pay a one time service fee for their listing and then agree to have a background check done. Now that this service is being offered for people on a world wide basis, the Rent a Grandma brand has definitely been experiencing a lot of success and continues to grow. Despite the Sharks laughing at his idea and having little faith that he would make a success story out of it, Pliss kept his eye on the prize and worked extremely hard to offer parents around the world with a more reliable babysitting option.