Over the past few years, Internet culture has gone mainstream. Every image has something witty superimposed in Impact font, and every article ends with a request to smash that Like button. One of the more contentious ideas from the Internet to enter the mainstream is trolling. Tom Green, the inspiration of countless teen antics, could be seen as a precursor to the modern generation of Internet trolls, made famous through modern platforms like Vine and Periscope. His career, when viewed contemporarily, almost paints Green as a prophet of modern amateur comedy. With that in mind, let’s look at what Tom Green is doing today, to try and see what effect he might have on the juvenile humor of tomorrow.

Tom Green was born in 1971 in Pembroke, Ontario, Canada. He moved around Ontario throughout his childhood and teen years, and started doing stand-up when he was fifteen. He had a relatively successful stint as a comedian and hosted a show on University of Ottawa’s student radio. Originally focused on rap music, the show eventually changed format to become a late night call-in show, where Green and college friend Glenn Humplik would ridicule and mock those who called the show before hanging up on them.

By 1988, Green had developed his interest in rap enough to pursue his own career in it. Under the name MC Bones, Green moved to New York to create the rap group Organized Rhyme. Producing beats with sequencers and drum machines, Green was ahead of the times for East Coast rap. His efforts were rewarded with a few Canadian rap awards.

In 1994, Tom Green started producing video in the form of an hour-long public access show broadcast in Ottawa. The Tom Green Show was, in its essence, a variety show. Green would interview guests, promote musical guests, and show pre-recorded skits. The skits are what distinguished The Tom Green Show from its contemporaries. They frequently focused on Green pranking unsuspecting victims, including his own parents (despite their apparent lack of support for Green or his pranks.)

Between 1994 and 1996, Green produced fifty episodes of The Tom Green Show. From pretending to be an injured cyclist to dousing himself in condiments in the middle of a grocery store, Green’s sense of humor was one that people either loved or hated. 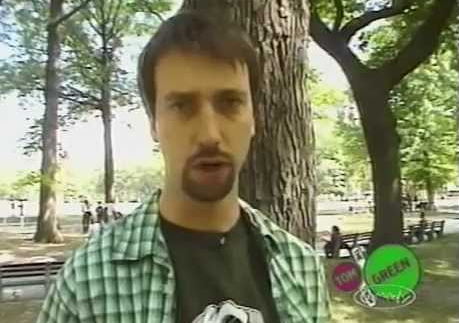 Tom Green during the first iteration of The Tom Green Show

In 1996, Green produced a pilot for CBC, which later went onto Canada’s The Comedy Network, and aired for two more seasons. In 1999, MTV picked up the show, and that’s when Green’s career really started. From that point, The Tom Green Show focused almost exclusively on his distinctive skits. He painted pornography onto his father’s car, drank milk straight from a cow, and hung his own painting in the National Gallery of Canada, which was not removed for days (in fact, it was only removed after he came back and vandalized it). These skits, when viewed today, are incredibly similar to many popular YouTube videos. One of the recurring skits involved Green following pizza delivery people, trying to sell a cheaper pizza to their customers, which is highly reminiscent of the current trend of pranking delivery people.

While on MTV’s Spring Break, Green wrote “Lonely Swedish (The Bum Bum Song),” which was an instant hit among Green’s normal demographic. That song, in addition to a skit from The Tom Green Show where Green physically engaged with a dead moose, were featured in Eminem’s contemporary hit, “The Real Slim Shady.”

After instant success, Green’s notoriety made it more difficult for him to find people to prank, and then, in 2000, he was diagnosed with testicular cancer. Putting the show on hiatus (it was replaced by Jackass six months later), he created The Tom Green Cancer Special, following his path to surgery and highlighting a side of the childish prankster rarely seen. In June of 2000, Green was on the cover of Rolling Stone, demonstrative of his fame at the time. After a successful operation, Green started a fund to raise money for testicular cancer, and spoke on multiple college campuses to raise awareness.

After Green was successfully treated, he starred in a couple movies, including Charlie’s Angels, Stealing Harvard, and Road Trip, where he continued his antics by putting a live mouse in his mouth. It was on the set of Charlie’s Angels where Green met Drew Barrymore, and in July 2000, the couple were engaged. Their engagement, specifically interest in their wedding date and location, were the focus of a lot of media hype, culminating in an SNL skit the two participated in, where the couple pretended to almost get married on air, before Barrymore ran off set. Their marriage, when it ultimately happened, was brief, ending in 2002. 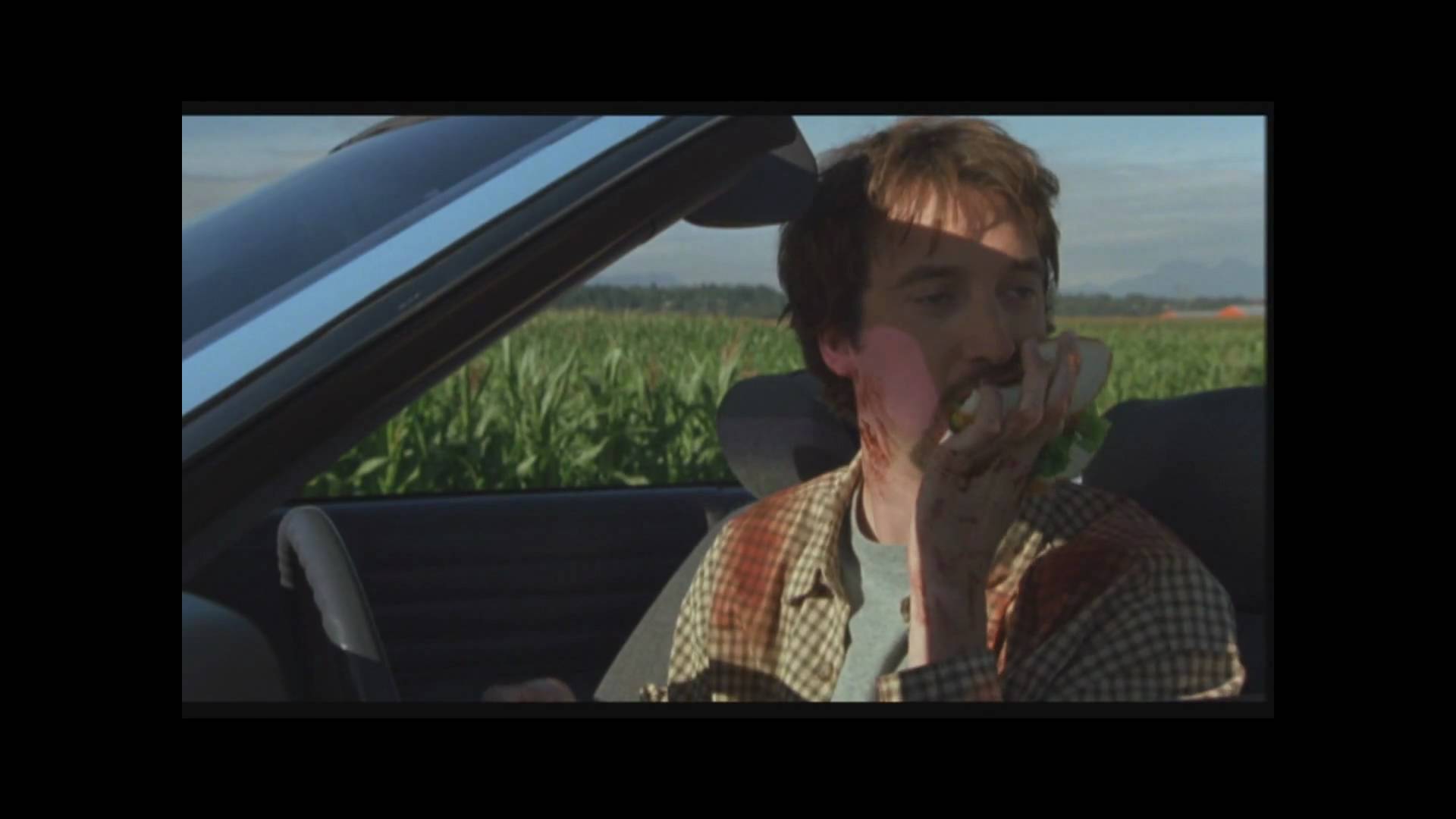 Tom Green, covered in deer blood, in Freddy Got Fingered

During that time, Tom Green wrote, directed, and starred in Freddy Got Fingered. The movie won five categories at the 2001 Golden Raspberry Awards, which are given to the worst movies of that year. Green is the only performer to have ever gone to claim their honors in the Awards’ twenty year history. Showing up with his own red carpet, Green explained how he had set out with the goal of earning a “Razzie,” and then played harmonica until he was physically removed from the stage. Now, comedic award shows are a thing of their own, but then, Green was smashing an implicit reverence Hollywood had for itself.

After a couple one-shot productions for MTV, and guest-hosting The Late Show with David Letterman, Green was given his own late-night talk show, back on MTV. While the show lasted less than three months, it was enough to keep Tom Green appearing on television through the next couple years.

In 2004, Tom Green released his autobiography, Hollywood Causes Cancer: The Tom Green Story, and the next year had a brief return to rap. Performing with DJ EZ Mike of the Dust Brothers, Green went on two Canadian tours and in 2006 released the album Prepare for Impact. While there were plans for another album, those have since been abandoned.

In 2006, Green was picked up by ManiaTV.com and created Tom Green Live!, which was filmed in his home in Hollywood. In 2008, Green left ManiaTV.com to rebrand as Tom Green’s House Tonight, which he hosted independently on TomGreen.com. While he initially offered the show for syndication on television, he redacted that after a couple months, preferring to retain full creative control.

With that control, Tom Green has continued to provide the same variety of content he always has, only it seems more at home in a web browser than it ever did delivered by cathode ray. Referring to his one-of-a-kind production as Web-O-Vision, Tom Green’s House Tonight ran until 2011. Green continues to produce content for his website, including a recurring podcast called Tom Green Radio. As Green’s productions have matured, so have his interview techniques. Rather than goading guests, Tom’s in-home studio encourages guests to feel a level of comfort they might not in a professional studio. 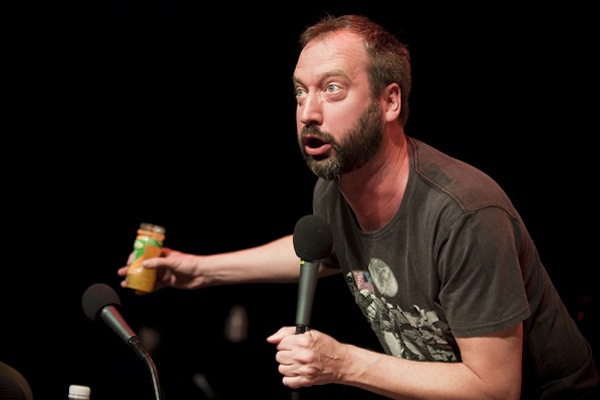 In 2010, Tom Green started to do stand-up sets, in addition to his other productions. What is notable about these is their content. Rather than focused around antics or absurdity, Green’s standup comedy is almost entirely focused on our culture’s digitization, especially the effects social media has had on our communication. While Green hasn’t seen much popular acclaim for his stand-up, he has managed to find a new outlet in an era past MTV. Combined with his live-streaming YouTube show, Web-O-Vision, Green is continuing to demonstrate his ability to keep up with the changing field of comedy, and may even be a bit ahead of the curve.