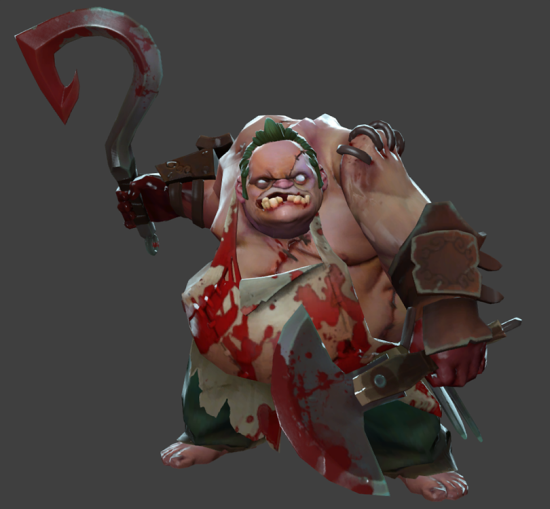 One of the most played heroes in DotA 2 is Pudge the Butcher. He specializes in isolating and killing fragile enemy heroes while gaining permanent bonuses that allow him to snowball into a very monstrous tub of lard. However, he is not that easy to play as his iconic ability Meat Hook requires a great deal of practice in order to score a hit, and certain toxic teammates tend to become quite unforgiving if a Pudge player always fails to snatch someone using the hook. If you do manage to get the hang of dismembering with the big fat Butcher, then he is truly a powerful addition to any team.

Description: Pudge launches a hook that travels on a straight line, dealing damage if it hits an enemy hero, then dragging it back to the Butcher. This versatile ability can also be used to save an ally from certain death, and it can snatch invisible enemy heroes as well. It can also go through any kind of terrain, trees, and fog, allowing skilled players to haul fleeing victims back to their demise with blind shots. Meat Hook can drag and damage spell immune enemies, but will not disable them. The hook will also not work when it is returning back to Pudge.

Normally you would want to hook fragile enemy heroes like Crystal Maiden or Pugna. Stay alert and be wary of fishing out enemy initiators like Earthshaker, as this may mean trouble for your team.

Take note that the hook has a small area of effect on its tip, so you do not really need to precisely hit someone square in the face with it. It can help with catching enemy heroes should they slightly move away from the hook’s trajectory, or jeopardize your attempts when they are next to creeps.

Description: Pudge lets loose a noxious cloud of stink that damages and slows nearby enemy units, making it a good ability for farming and dealing massive damage. However, the smell is too offensive that even Pudge himself gets hurt as well.  Since the damage Rot deals is magical, Pudge can reduce his self-inflicted pain with the use of items that boost magic resistance like Hood of Defiance. Pudge can also commit suicide using Rot to deny enemy heroes the gold, experience, and satisfaction from killing you. Take care when getting disabled or silenced while Rot is activated, as you cannot turn it off for the whole duration of the debuffs. Rot will not cancel Dismember when you activate it while channeling your ultimate.

Description: The magic resistance helps reduce the damage received from Rot, and it stacks with other sources as well. Pudge also gains the ability to receive a permanent strength bonus whenever he kills an enemy hero or when one dies around the given radius. By having an active participation in kills, Pudge can amass good amount of strength that will prove quite useful in the late game. You don’t need to put a point in Flesh Heap in order to gain strength from dying enemy heroes.

Description: The Butcher’s ultimate ability locks down an enemy hero or unit for the given duration, completely revealing and disabling it. Dismember deals a fixed amount of damage per second plus a bonus based on a percentage of Pudge’s total strength. To make matters worse, Pudge gains health equal to the damage he deals while dismembering the target.

Pudge is usually built to be tanky, and this offers a lot of item builds. If you are undecided on what to get, just follow this item guide for Pudge:

The Butcher’s usual starting items include Gauntlets of Strength, Iron Branch, Tango, and Healing Salve. Get a Boots next, followed by an Urn of Shadows, and upgrade those Iron Branches into a Magic Wand. If you are laning mid, don’t forget to buy a Bottle before Boots for sustenance and easier ganking through rune control.

Pudge can benefit from the bonuses given by every kind of Boots, but of course that mainly depends on your play style.

Power Treads: If you need additional strength for survivability and if you are well-versed in the art of tread switching.

Hey Anthony, what is this “tread switching” thing?

Basically it involves changing the Treads’ attribute depending on the situation. Treads gives a bonus of 9 for the primary attribute that is set, and attributes give a specific bonus per point, right? So if you set it to intelligence, whose bonus gives an additional 13 mana per point and 0.04 mana regeneration per second, you will get an extra 117 to your maximum mana (13 x 9 =117) and 0.036 mana regen (0.04 x 9 = 0.036).

If you set it to strength, you gain 171 additional maximum health and 0.27 health regeneration (1 point of strength = 19 health and 0.03 health regen), and since Pudge is a strength hero he will gain +9 attack damage. This little bit of extra health might be the deciding factor between a successful escape and certain death.

Agility gives armor and attack speed (0.14 and 1 per agility respectively). Setting the Treads to this attribute before using a consumable regeneration item or Bottle will give you more health or mana, although miniscule but still it can be quite useful in the early game.

Arcane Boots: If you are not yet confident with your skills in using Meat Hook then go for this one. The extra mana pool and replenishment will give you more chances of landing that skillshot. Later on you can disassemble Arcane Boots for Aether Lens (more on that later).

Phase Boots: An extra burst of speed plus phasing can help you outrace your opponent when going after those runes, or chase down your fleeing quarry for a Dismember.

Tranquil Boots: Gives extra armor and health regeneration, plus that huge movement speed bonus might be what you need to control the runes and gank faster.

Boots of Travel: Usually the late game choice, but if you are swimming in gold then go for it, as long as you have completed other needed items. Nothing beats that huge movement speed bonus and you no longer need to buy town portal scrolls.

Blink Dagger allows a more precise positioning and chasing for Dismember and Meat Hook, especially when you are emerging from fog. Unfortunately it will be disabled once you take damage including Rot.

Force Staff gives extra intelligence and health regeneration, and it does not get disabled by damage, allowing you to escape from certain abilities. You can also save allies or jeopardize enemy positioning with it. However it has a shorter range and longer cooldown.

Drum of Endurance is a viable option if you need extra mobility and survivability, especially if you were forced to purchase a Bracer.

Aghanim’s Scepter has become an important item for the fat guy thanks to its massive reduction to the cooldown of Meat Hook, making hero hunting look like a Saturday afternoon fishing trip. Add an Aether Lens for a much longer hook range and better damage.

Heart of Tarrasque drastically improves your health, health regeneration, and strength. This also increases the damage dealt by Dismember and the heal you gain from it. Usually a late game item, some Pudge players don’t even let the match last that long to buy one.

Hood of Defiance gives additional magic resistance and health regeneration, making Pudge a little bit tougher especially against magic users. Upgrade that into a Pipe of Insight later on if the magic-oriented enemy lineup is getting a lot pesky.

If you are having a hard time channeling Dismember or if the enemy is getting ahead of you with disables, consider buying a Black King Bar. This will give you additional strength, damage, and magical immunity. Alternatively you can get a Lotus Orb instead to reflect their spells, and you can use it on your allies as well.

If you are getting the brunt of burst damage or hacked to pieces by their carry, get a Blade Mail. Crimson Guard will help reduce physical damage for you and your teammates.

If these physical damage carries are still causing a lot of trouble for you then you can invest on a Ghost Scepter.

Shadow Blade can be effective if nobody else in your team’s lineup relies on invisibility. You can easily sneak up on enemies and Dismember them, or activate Rot before going invisible to damage unsuspecting foes.

Shiva’s Guard grants an area of effect nuke and slow that goes well with Rot. Also, your enemies will have a harder time killing you thanks to their reduced attack speed and your huge armor.

This item build should not be followed based on its order, but based on how the game goes for your Pudge.

Don’t be afraid to try out Pudge. He is quite fun to play, and snowballing early game can almost ensure your dominance through the late game. Just learn how to properly land Meat Hook, and always coordinate with your teammates.