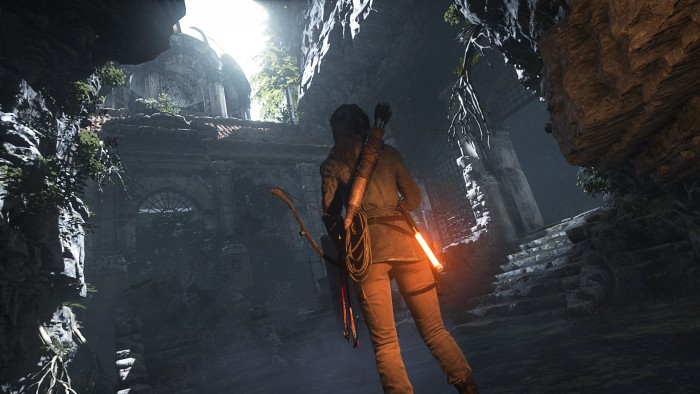 I first played Tomb Raider way back in the late nineties. So that was a while back now that it’s 2017… Anyways the graphics were astounding for the time. The combination of exploration, puzzle solving and gun play enthralled me. Fast forward nearly two decades and Lara Croft as been reinvented at least three times. In her latest incarnation the graphics are better, combat is tighter and the puzzles are as mind bending as ever, but it is still the same kind of experience underneath. That’s a good thing, believe me, when I first started compiling this list of five games in the same vein as Rise of the Tomb Raider it struck me that so few are made these days. I guess designing so many disparate elements and forming one cohesive package requires a huge amount of work, unlike, say, an FPS where the core controls and game play are already set in stone.

Back again as the young Lara Croft, Rise of the Tomb Raider picks up where the previous game left us. One year after the harrowing events of the previous game our hero is back putting herself in all kinds of unnecessary danger. The story is very well written, courtesy of Rhianna Pratchett, daughter of the now sadly deceased British author Sir Terry Pratchett. The combat this time around has been further refined, though the combat in Tomb Raider was top notch, with stealth elements and insta-kills. The puzzle platform sections are all characteristically tight, maybe a little fiddly in a few places, but the new weapons and gadgets make exploration a joy.

All in all the game is great, but it is a linear adventure game. You’re not going to be spending hundreds of hours on it, unless you go for all the collectables. So what to do when you’re finished with Lara’s epic quest? Play one of the games I suggest of course.

I’ve been leaning on the crutch that is “The other games in the series” for a while now I think, but I would stand by this recommendation more strongly than most. The Tomb Raider franchise is a mess of reboots and sequels and playing all of them would likely take the better part of a year. The original series ran from the first Tomb Raider back in 1996 all the way to the utterly terrible Tomb Raider: The Angel of Darkness in 2003. That’s six games, all of which average out as pretty damn good. My personal favorite was Tomb Raider II. Game play wise expect clunkier controls, the platform sections will make you pull your hair out in frustration until you get used to the precise geometry required when controlling old-school Lara. The stories are a little bare bones for the first few, but still engaging adventures in their own right.

The second series of games were technically remakes, making them more like soft reboots of the franchise. The first of these was Tomb Raider: Legend, a prequel to the previous games. It has an all new engine, for the time, some excellent story-telling and more refined movement. The movement was crucial in my opinion, getting through the platform sections is much more fun than in previous entries. It was followed by a straight up remake of the first game and a final game to round out the new trilogy. Overall these games are much more palatable for a modern gamer.

Of course there is also 2013’s Tomb Raider, in the same series as the latest game. Be sure to check them all out if you want to enjoy something of a history of video games lesson.

4 – The Legend of Zelda: Link Between Worlds

Nothing like Tomb Raider in terms of aesthetic, but they both share something at their core. The Zelda games are not RPGs, regardless of what some people might tell you. They are, with the possible exception of Zelda II: The Adventure of Link, action-adventure games. Much like the Tomb Raider series, you explore, you fight, you solve puzzles and very occasionally do some platforming. While the earlier games in the Zelda series share more in terms of look withe the Tomb Raider games, A link Between Worlds is the latest entry into the franchise, and also the one I completed most recently. So let’s sell you on it.

Released in 2013 for the Nintendo 3DS, A Link Between Worlds is a sequel to A Link to the Past, released back in 1991 for the Snes. It’s an isometric adventure game where you travel a fairly expansive world map solving puzzles, interacting with NPCs and, most importantly, raiding tombs. See? Told you there was a connections. The games core conceit is that Link can now become two dimensional, merging with a wall to become a painting of himself. It looks amazing, and the puzzles that revolve around the mechanic are some of the most original in the series yet. I cannot recommend this game enough, though if I were to lay any issues at its feet I would argue that it is a little short.

There were Batman games released before these ones, and there will undoubtedly be Batman games released after, but none, and I mean this, none will match the sheer genius that developers Rocksteady were able to create with Batman: Arkham Asylum. With Mark Hamil and Kevin Conroy back as The Joker and Batman respectively, and the legendary Paul Dini writing the thing, Arkham Asylum was one of the best written games I have ever had the good fortune to play. Combine that with one of the most fun third person combat systems and some excellent stealth and you are on to a winner. Now I know that the whole game can be beaten by mashing the A button, but doing so misses the point. The combat is essentially a waltz, and I mean that literally. You rhythmically play in a 3/4 time signiture, weaving different gadgets and moves as you go, making you feel like the Dark Knight himself.

The combination of combat, puzzle solving and platforming put this game in the same broad genre as Rise of the Tomb Raider, but honestly this game is a cut above the rest. It is not the most similar game to Tomb Raider, which is why it isn’t number one. The other games in the series went open world and while they improved the combat with each installment, they were never able to match the atmosphere and story quality of the first game in the series. Don’t get me wrong, they are good games, just not as good. So if you’re looking for something that makes you feel powerful, instead of vulnerable, then check out the Arkham series.

While is shares more with the Resident Evil series, The Last of Us‘ connection to Uncharted is the main reason it’s on this list. Well, that and it’s a story driven action game with a focus on gun play and stealth. The Last of Us was released in 2013 for the PS3 and received much critical acclaim for its deeply emotive story line and some excellent acting from the two leads, Troy Baker and Ashley Johnson. I have to admit the premise is excellent. Taking the zombie concept in a fresh direction, by re-branding them as fungal infected humans, and taking the core game play from Resident Evil 4, The Last of Us depicts a world after the disaster in a far more human way than games like Fallout 3 or 4 have ever done.

I am fond of crafting systems in video games, their allure has not yet lost its luster for me, and The Last of Us’ rudimentary take on the concept is very satisfying. Improvised weapons are the order of the day and the animations associated with each kill are fantastic. The ending is superb, and I realize I say this a lot, but it completely altered my perspective on the lead, I’ll not say which. I will ask Naughty Dog to not make another game in the series, though fat chance of that. Another game would invalidate much of the emotions I felt during the ending of this game, which I wold argue lessens its impact as a piece of art.

Still, if you like great story telling and excellent performances, on top of refined, if not ground breaking, game play, you can’t go wrong with The Last of Us.

When Tomb Raider fell Uncharted was there to pick up where they left off. There has always been an element of Indian Jones to the Tomb Raider franchise, but Uncharted really runs with thew concept. I first played Drake’s Fortune back in 2009, yes I know, the game had been out for two years by that point. I fell in love with the story and characters. There was that same snarky dialogue you heard back in “Raiders of the Lost Ark” between Marion Underwood and Indy, between Nathan and Elena. It really did feel like a video game movie for much of it. There was one major issue with the game though., The combat. head shots were notoriously difficult to pull off, for me anyway, and when you unload seven or eight 7.62 rounds into someones mid section you’d expect most of them to come exploding out from their back. Not the case here, and it drove me nuts. Thankfully the puzzles and platforming, not to mention that great story, kept me interested all the way to the credits.

But it didn’t end there. There are two other games in the franchise that came after, with a fourth game on its way too. Uncharted 2: Among Thieves took all of the issues I had with the first game and fixed them. Add to that an even better story, as if such a thing were possible, and some excellent direction and we have a game that captures the spirit of film better than any other before it. I really cannot overstate the importance of this one, probably the best in the series. Uncharted III: Drake’s Deception is a great game too, though less so than the second game in the series. All of the Uncharted Games have cutting edge graphics for the consoles that they appear on. If you want more Tomb Raider-esque action adventure then pick up the Uncharted series.

There we have them, my top five games like Tomb Raider. Each game on this list is fantastic, and well worth playing even for non fans of the Tomb Raider series. There are other games that have a similar feel to the franchise, but many of them were made years ago, during Lara’s hey day. And if you’re going to g that far back in time, surely it’s better to just play the original TR games. If you can think of any other games that deserve to be on this list then please, leave a comment and let me know. Happy gaming everyone.