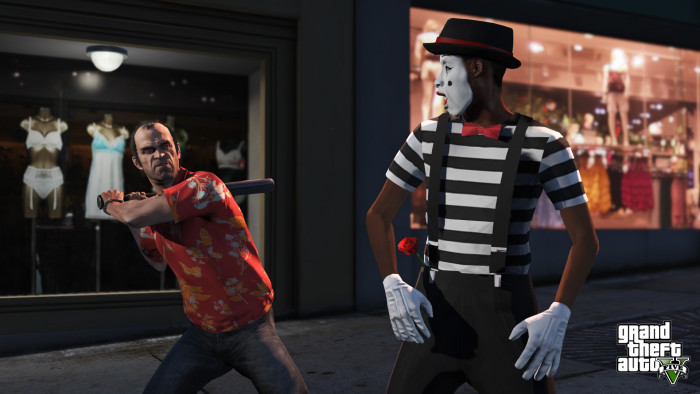 Few games can match the unbridled freedom and wanton destruction of the “Grand Theft Auto” series. From the top down police chases of old to the fully realized worlds of the newer games nothing comes close to their attention to detail. Beginning as a top down crime ’em up way back in the nineties the series didn’t really take off until the PlayStation 2 era.

The development team used what they had learned developing Body Harvest on N64 and applied it to the setting of GTA to make Grand Theft Auto III. A fully realized 3D pastiche of New York. The 2001 game was a watershed moment for the games industry, for while the game was crude and occasionally juvenile, there is doubt in my mind that it was truly an Adult experience.

After a few minor missteps we arrived at Grand Theft Auto V. It’s been three years since the game was released and we are still finding new things in Rockstar’s densely populated State of San Andreas. But what if you want something new? Something that captures the magic you felt when you pulled off the jewelry store heist? Or the manic intensity of the assault on the O’Neils farm? Well I have some good news for you. I have compiled a list of five games that should scratch the itch, and hopefully last you until Rockstar announce their next big project, rumored to be Red Dead Redemption 2. So lets count them down. 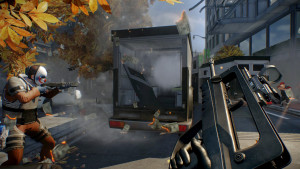 Let’s start with something a little different from Grand Theft Auto V. Payday 2 is a frantic heist game where you join forces with some friends to rob banks, rig elections or even steal nuclear bombs. In many ways the game surpasses GTA V’s own heists. Payday 2 shares a few back end features with Call of Duty, leveling up your character, assigning skills and fixing up load outs etc. It’s these RPG elements that grant the game its longevity. It has plenty of DLC, though none of it is required to play, and it is currently $19.99 on Steam. 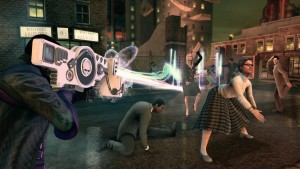 Taking the Saints Row series penchant for the ridiculous up to eleven and breaking the knob off, Saints Row IV is terrific. A game that revels in the stupid, balls to the wall fun that video games, and no other medium, provides. It’s earliest games were essentially GTA clones, crime simulators. But it has carved out a niche of its own over the years. The game’s story is a parody of science fiction film and games, with a heavy influence from the Mass Effect series. taking a leaf out of Crackdown’s book, this release features super powers. i honestly hadn’t had that much fun in an open world super hero game since Spider-man 2 on the Gamecube. You can find the game for $19.99 on steam. 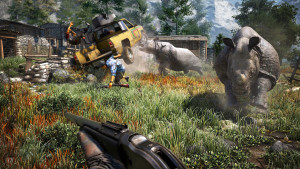 Less a crime simulator and more an open world sand-box extravaganza. Far Cry 4 builds on everything that Far Cry 3 established. The overall plot may be weaker, but the gameplay is better in a whole myriad of ways. The map is enormous and filled with things to do, though there is nothing quite as interesting as Far Cry 3’s World War 2 letters. Do you want to ride an elephant into an enemy stronghold, firing wildly from a grenade launcher while summoning bears and tigers to aid you? Then this is the game for you. Of note is a fairly terrific performance from Troy Baker as the charismatically sadistic villain Pagan Min. It can be bought from the Steam store for $49.95. 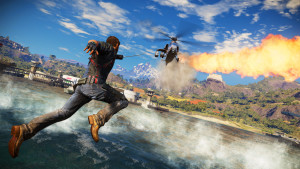 With a feel similar to Saint Row IV, that kind of madcap action and over the top set pieces, Just Cause 3 manages to be a pyrotechnic sadist’s wet dream. Run, drive and fly around a beautifully rendered tropical paradise. Strap rockets to a cow. Wing suit through the church bell tower and drop boats on your enemies through supply drops. The game is almost unlimited in terms of fun and mayhem. There is a story to play though too, but who cares about that. Rico grows a beard, liberates a people, kills a Dictator, but this time it’s personal blah blah blah. You’re not playing Just Cause 3 for its plot, you’re playing it for the cathartic experience of attaching enemy soldiers to the blades of a helicopter, fitting them with rockets, turning them on and trying to fly.

There is a wonderful word in the English language. Ambivalent. To experience two, usually conflicting, emotions simultaneously. MGSV makes me feel ambivalent. The game is astounding, some of the best open world game play I have ever experienced, but as a long time fan of the series, I was ultimately disappointed by the plot. This is a series notorious for it’s ridiculous dialogue and extended cut scenes. For it’s ability to turn camp into art and make you care. Metal Gear Solid V’s plot is a disjointed mess, with flashes of genius. That’s all I’m going to say about it. The gameplay is a whole other kettle of fish.

Back again as Big Boss, genetic father of former series protagonist Solid Snake, you must rebuild your private military to take on the villainous Skullface after he destroyed your previous base and left you for dead. You do this by kidnapping soldiers straight off the battle field of soviet occupied Afghanistan, and war torn Angola. The seriousness of the plot contrasts with the wonderfully fun, but silly, weapons and equipment you use. Roam the absolutely gorgeous environments, sneaking around soldiers with inflatable decoys of yourself, that can talk! Put pictures of scantily clad women on your cardboard box to distract them or call upon the wrath of the heavens to stun them with sky lightning.

For the gameplay alone, including the wonderful base management and weapon research, I cannot recommend this game enough. In spite of my criticisms I spent over 100 hours with the game.

So there we have it, five games like Grand Theft Auto that will keep you busy for a while to come. There are many other open world games, especially if you factor in RPGs. If you want to have a look at some of them check out this article on Games Like Skyrim. If you’re looking for a strategy fix on the go I have a few Games Like Clash of Clans you can have a look at too.

So what do you think? do you have any suggestions for people looking to get their GTA fix? Let me know in the comments.