When you buy an iDevice, it has an App Store installed. This App Store is official, straight from Apple, and every application on it goes through Apple. Unlike Android, Apple doesn’t really support third-party app stores. So, for the most part, what you see is what’s available to you. However, there are plenty of third-party iOS app stores out there. You just have to look for them. vShare is one such app store, and is a good app store alternative for someone who isn’t happy with the original store.

vShare’s most notable feature is the fact that it hosts primarily cracked apps. What is a cracked app? Basically, it’s a paid app that is uploaded onto a free app repository (like vShare) with the intention of being downloaded by other users. Apps can be cracked for a variety of purposes, to allow users to “try before they buy” or to allow developers to test out their apps on different devices without having to shell out the money for it. When I composed this list of the best apps like vShare, I looked for apps that were easy to use, offered a wide selection, and were well-supported. Without further ado, here’s a list of the best apps like vShare in 2016. 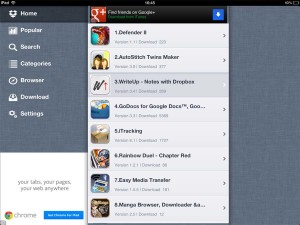 Aside from vShare, Appcake is probably the most popular third-party iOS repository that you’ll find out there. It has been around for a very long time, and it has accrued a very loyal user base. In the case of third-party app stores, it can be very helpful to have a large user community. In most cases, the larger your user base, the larger your selection will become over time, as more and more users contribute to the app’s offerings. Appcake is no exception. In my opinion, they probably have one of the more extensive selections that you’ll find in a third-party app store.

Appcake is also pretty well-supported, as far as iOS third-party app stores go. The biggest issue with these app stores is that stability and optimization can be a little shaky. It’s completely understandable. With each new version of iOS, these developers have to completely overhaul their app, while still maintaining compatibility with older operating systems. Appcake generally runs pretty well on newer devices, and it’s nearly perfect on older ones. Appcake is currently only available for individuals with jailbroken iOS devices. However, if you don’t have a jailbroken device, they have a premium app store called iPASTORE that is just as good (if not better) than its counterpart.

Back in the day, the biggest and most popular third-party app store for iOS was an application that went by the name of ‘Installous’. Installous closed down a few years ago, and people scrambled to find replacements. Zeusmos was an alternative that I heard mentioned a lot, and it remains one of the most professional-looking third-party app stores out there. In my opinion, apps like vShare and Appcake are great, but they’re not very attractive, and all of the different menus and what not can be difficult to navigate. Zeusmos looks and feels great, from a user-interface perspective.

Since it saw such a massive rise in popularity a few years ago, Zeusmos is now a paid third-party application. You can purchase the lowest level license for $4.99, and I think it’s worth every penny. Zeusmos is clean, fast, and it is packed with all sorts of features that you won’t find in other free options. My personal favorite is the ability to sign into their dashboard from your web browser, and queue future installs. It’s also available for individuals without jailbroken devices. It’s a great all-around vShare alternative, and I think its convenience and quality is well-worth the price of admission.

AppAddict is a cool tool, because it’s a desktop repository that doubles as an actual mobile application. Allow me to explain. Some third-party app stores aren’t actually apps — they’re websites that can be accessed via a browser. You download .ipa files from these websites, and use a software on your computer to load the .ipa onto your iDevice. (An .ipa is to your iDevice as an .exe is to a Windows computer.) AppAddict itself is a website, but their application, called iSignCloud.

iSignCloud is a nifty little application, and it’s available to people who don’t have jailbroken devices. It allows you mobile access to AppAddict’s entire library (which is pretty big) and also offers users the ability to apps that aren’t found in the official App Store. So, if you’re looking to download apps like Moviebox or XBMC, this is a pretty perfect fit. With all things considered, this AppAddict is probably the most versatile application on this list. You’re having to pay for what you’re getting, though. The standard license for iSignCloud costs £6.99, which is around $10. Like Zeusmos, though, I’m pretty confident in saying that it’s worth what you get out of it.

Remember when I talked about third-party app stores that were just websites? PandaApp is one of those stores. I think that a lot of people are generally biased against web browser applications, since they require a little more work than other third-party stores. However, I think that there’s definitely something to be said about the freedom that you’re given with PandaApp. In my opinion, vShare is a great app store replacement, but the .ipa installation needs work. It’s slow, and it’s kind of unstable. With PandaApp, you’re just downloading .ipas, and going elsewhere to install them. 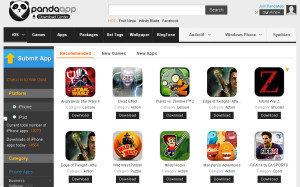 PandaApp’s selection is great, and their website is very easy to navigate. Finding the right application is just a matter of searching for it, clicking, and letting it download. This may seem like something that should come standard in third-party iOS app stores, but you would be surprised. PandaApp is simple to use, and I think it’s ideal for someone who realizes that, realistically, your computer will do a better job installing .ipa files to your iDevice than your iDevice will. (Think: It’s generally much faster to download music and load it to your iPod via iTunes than it is to purchase the music from iTunes and install them straight from the iTunes app.) However, I can understand why someone may be put-off by this store. For a more all-in-one solution, keep reading. 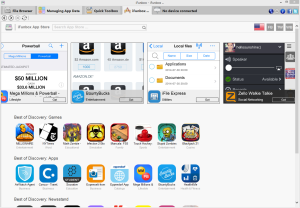 iFunBox is a really cool software, and I think that every iDevice user has something to get out of it. It’s a third-party app store that doubles as an .ipa installer, which doubles as an iDevice file manager. As someone with a lot of iDevices, I use iFunBox quite a lot, primarily to easily import and export audio files. It’s very comprehensive, and offers a lot of different uses without ever feeling too confusing.

iFunBox’s app store is the focus of this article, though. It’s easy to use, and it has a wide selection. The biggest perk of this app store, in my opinion, is that it’s very safe and stable. In a lot of third-party app stores, you will find yourself in plenty of situations where you’ll download an app that will crash, or that won’t work how you expect. iFunBox is a long-running application, and it is well known for pushing out quality stuff. Everything is double, triple, quadruple checked before it’s put out to the public. They offer convenience and peace of mind that is unparalleled in this market. I recommend it to most everyone who is looking for a good vShare alternative.