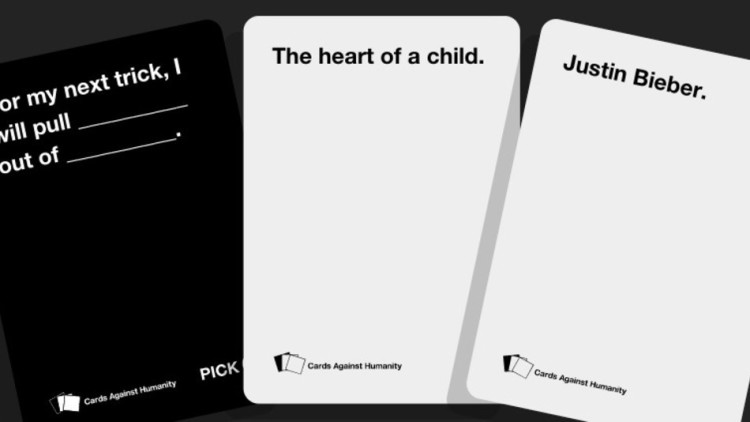 I’d love to open this paragraph with a few quotes from some of the more risque cards in Cards Against Humanity. Really, I would, but for those of us who have already played this party game masterpiece, you know why I can’t. Dubbed the party game for horrible people, playing it is simple. Each player draws ten white cards. The person who last took a dump is called the Card Czar. They draw one black card and read it out loud. All players then anonymously put in the white card that they think is the funniest. The Card Czar selects the one they like the best and the winning player gains an awesome point, symbolized by the black card. Repeat until you get bored.

At least that’s how I’ve always played. Apparently you should be playing to a certain number of points, but I never have. Those rules are the only ones you need to follow. There are a variety of house rules that spice up the core gameplay that you can try out, my favorite is letting serendipity play by putting in a random card from the white deck, always embarrassing when it wins. Cards Against Humanity is one of the many success stories to come out of Kickstarter. Initially pitched back in 2010, it managed to accumulate more than $15,000, roughly 400% of its goal. It is safe to say that it introduced many people to the joys of tabletop card games, beyond the odd hand of rummy played poorly. So now that you’ve whetted your whistle on Cards, why not give these other equally fantastic games a try. 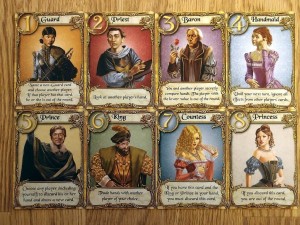 I’ll be honest, Love Letter isn’t much like Cards Against Humanity. True, they’re both card games, but beyond the painted paste-boards, they share nothing else. It’s on this list because of how fantastic it is. Playing it is simple. The deck is shuffled and one of the sixteen cards is removed from the game. Each player is dealt one card, which has a number and an effect. Each turn you must draw a new card and play a card, either the new or the old. The abilities on the cards vary, but your aim is to use them to force other players out of the game, whether by guessing what is in their hand with a guard, forcing them to compare the number on their card to your own with the Baron or any number of other ways. The winner of the round is either the last man standing, or the player with the highest value card left.

I may have made the game sound pretty dry, but trust me, in the heat of the moment, as you try to deduce what your opponents are holding based on how they have been playing, and the probabilities, you’ll see how fun it can be. The game is also pretty cheap, under $5 dollars in some places. So if you’re in the market for a new card game to fall in love with, you can’t go wrong with Love Letter. 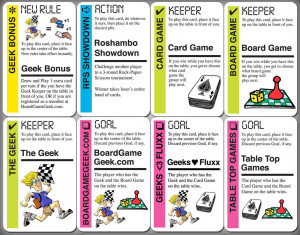 As much as I enjoy Love Letter, I know it can’t match Cards Against Humanity in the humor department. But Fluxx can. Originally developed way back in 1996 by a pair of NASA scientists, not kidding, Fluxx is ludicrously simple. Each player begins with three cards. On your turn you must draw a card, then lay a card. That is it. Sort of. There are four kinds of cards in vanilla Fluxx, Keepers, goals, actions and, most interestingly, new rules. As you play cards the rules of the game change based on the card you play. The end goal of the games changes too, usually it’s about getting certain keeper cards in your possession. It’s so easy to screw over your friends, and the fast paced, random nature of the game makes it a laugh riot.

There are loads of different theme versions of Fluxx, including Star Fluxx, Martian Fluxx, Pirate Fluxx, Adventure Time Fluxx and even Batman Fluxx. Each version has a few extra rules and card types, and all of them are immensely fun to play. If you’re looking for a funny game that anyone can play, check out Fluxx. 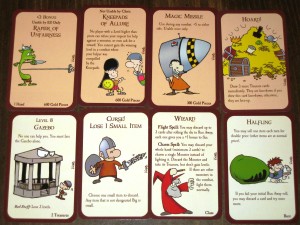 Have you ever played Dungeons and Dragons? No? Then go play that for a few months and come back to me. For the rest of us, let me introduce you to Munchkin. Now RPG aficionados should be familiar with the term. A munchkin is a DnD player who plays this collaborative game as though it is a competitive one. Tries to kill the most, have the highest level or take all the best loot for themselves. If you’ve ever played with one, you’ll know it can be a pain.

Munchkin, created by RPG legend Steve Jackson, is a wonderful pastiche of traditional role playing games. The goal of the game is to reach level ten by killing ten monsters. At the start of the game you may play however many cards from your hand as you like, adding classes or equipment to your character, or trading with another player. You begin your turn by “Kicking in the Door”, drawing a door card face up. Behind the door is a creature for you to slay. If your level plus whatever bonuses you have due to your equipment is greater than the level of the monster then you advance to the next level. Here’s where the real fun begins. Other players may downgrade the creature, in exchange for a cut of the booty, or upgrade the monster, to make it impossible for you to defeat it. The first player to kill ten monsters wins.

The game is a little more complicated than Cards Against Humanity, but it’s no less fun for it. The kind of bitter rivalries that spring up from this simple friendly game will make the worst game of monopoly look downright cordial by comparison. 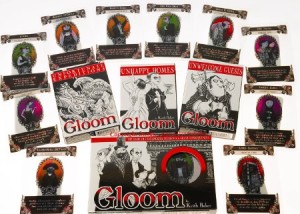 Gloom is a beautifully macabre game. If Tim Burton were to make a card game, this would be it. Its sense of humor can be as black as pitch or light and airy, it’s entirely up to the imagination of the player. Each player is given a family, each as eccentric as the last. You play transparent cards on top of them with negative or positive modifiers, and tell a story. Each modifier card has an event on it, and you must weave a tale of woe to explain why all these horrible things are happening to your family. Once you get their points to a nice negative, you kill them. The game ends once all the members of one players family are dead, and the winner is the player with the lowest score, on the corpses only.

The challenging part of the game is telling a coherent story, but you have to pay attention not only to your own series of unfortunate events, but also to your opponents. I did mention that there were positive modifiers. You can play them on the families of other players, so long as you keep their thread unwinding. The game is superb, and if you’re looking for something a little more spooky than Cards Against Humanity, this one should be right up your dark and twisting alley. 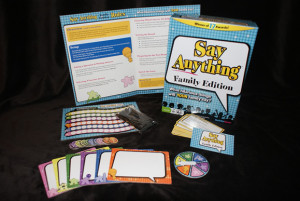 Say Anything is a lot of fun, I wouldn’t call it my favorite game on this list, that honor goes to Gloom, but it is the most like Cards Against Humanity. Each round there is a judge, who draws a card. On the card are several questions, the judge reads one out and the other players write down their answer. The players then reveal their answers and the judge secretly selects their favorite. The players then bet on the answer they think the judge will choose, with the winner receiving points. The winner is the first to twelve points. The goal of the game is very similar to Cards Against Humanity, making each other laugh, having discussions and arguing in a friendly manner.

The game is easy to pick up and play with friends and, depending on how funny your friends are, is as funny as Cards Against Humanity. Say Anything has a broader focus than Cards, which makes it a better game in many ways. If you’d like a little more freedom in your gaming, give Say Anything a try.

So there we have the, Five games you can play when the laughter dies. All of these games are a little more involved than Cards Against Humanity, which I think makes them work better as games. I love CAH, but it can get a little repetitive, especially if you’ve played it a few times. The beauty of the games on this list is that they can be played hundreds of times, and each time the results are unique. So happy gaming people.