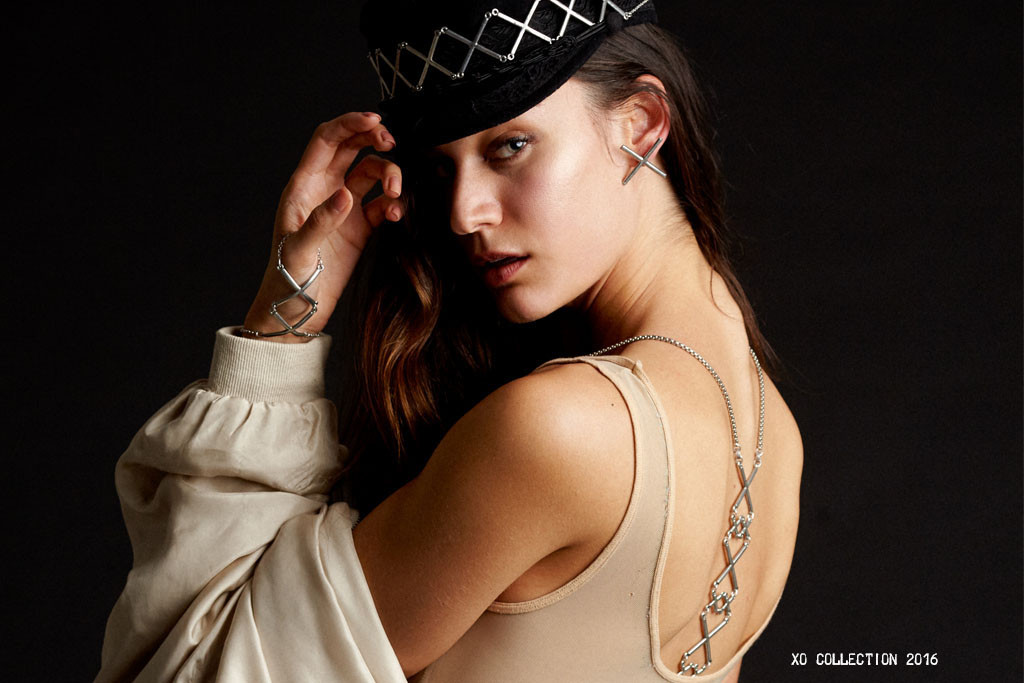 Mackenzie Burdick and Rachael Mann, designers and sisters from San Francisco, were long due for a big break. Their strengths had always been creativity and design. With backgrounds in interior and fashion design, in addition to a popular blog, the two were primed for success. They stumbled upon it when Mackenzie needed a unique fashion statement to stand out at a party. She decided to break up a necklace and retool it into a headpiece. It was a hit, and when they decided to produce fifty more copies of the piece for a local trunk show, it sold out and generated a lot of buzz. This was the beginning of their jewelry and accessory business, Litter.

Litter proved to be popular with a variety of celebrities and was featured in fashion shows and magazines. Throughout this process, they continued to rely primarily on recycled, vintage, and broken materials to produce their jewelry. However, Mackenzie and Rachael didn’t have the resources to scale the business. They designed each piece and also sourced materials, constructed the jewelry by hand, and handled social media. Needless to say, the two were stretched thin. On Shark Tank, the goal would be finding strategic partners to run the business side of things so they could do what they do best.

Upon entering the Shark Tank, Mackenzie and Rachael ask for eighty thousand dollars, in exchange for fifty-one percent of their company, very reasonable given seventy-eight thousand dollars in sales the previous year and projected sales of one hundred fifty thousand dollars in the current year. As consistent viewers of Shark Tank probably know, fifty-one percent is an important figure. Ownership of equity in a business translates into decision-making power. By offering the sharks fifty-one percent, they’re open to giving up a controlling stake in the company, meaning they’re looking for a partner to do some heavy lifting. This usually causes shark ears to perk up, but it throws a bit of a wrench into the Litter sisters’ plans. We’ll touch on that later.

Kevin zeroes in on their gross revenue thus far. He sees their product as fashionable and unique, so he wonders why they’re only expecting about two hundred thousand by the end of their second year. They respond that all of their products are hand-made, so between design, construction, and the rest of the job, they don’t have the manpower to produce more product. Mark and the other sharks are pleased to hear about their profit margins, however, as a one hundred dollar piece tends to cost about two dollars in materials. When Daymond asks if their production problem means they’re having trouble filling existing orders, they reveal an exploratory deal with Urban Outfitters, where they will produce four hundred pieces for test markets, with potential for expansion.

The sharks keep exploring possibilities for growth. Mark asks if actual construction of their jewelry requires their “special touch,” and they clarify that, while the designs are created by them (along with custom pieces), most of their product can be mass produced. Kevin still seems to have the largest reservations. He wonders whether or not their plans to hire a skilled salesperson and PR firm are the best allocation of funds. Barbara finishes his thought by saying “So you want to work for somebody.” “It’s just gotten bigger than us,” they reply, and Mark agrees. “You guys are designers; that’s your special sauce.” Why should they spend so much time on the business side when their true talent is in the design process, after all? On the other hand, Mark points out that none of the sharks are working full-time for Litter; they’re investors. Each shark has either expertise in a particular field or at least money to offer, but none of them can fill the role of a salesperson or PR firm. Mackenzie and Rachael agree, and say that they’ll use the money for sales and a new website, taking Kevin’s advice to ditch the PR plan.

Despite their flexibility, Kevin lays all of his concerns on the table. Most of all, he seems to struggle with the size of their business. This is interesting, given some of the other cases where businesses and products with far fewer existing sales have gotten good deals. As Shark Tank has become more popular, the sharks have gotten more ambitious and tend to seek out entrepreneurs with aggressive and risky plans for growth. His argument boils down to them thinking too small. “I like this stuff. I like the story, and I like you guys…and I don’t say that very often!” He calls Litter a proof of concept, but it’s not a successful business yet. He even claims that he would have been extremely interested if they had arrived with an ambitious offer, requesting two to three times the amount and promising to grow Litter into a ten million dollar business.

The back and forth is a little too much for Robert. Saying he has no passion for the jewelry business and that he doesn’t have the connections to lead them to success, he bows out. “I already have a full-time job.” After O’Leary’s speech and Robert’s exit, there’s a tension in the room, but Kevin doesn’t hate their product, and he’s probably looking to lighten the mood, so he tries to purchase a designer leg chain directly from the presentation model. Mark follows his lead and puts on a faux facial hair jewelry piece (notably absent from their current website, perhaps not fitting their high fashion image.)

Robert plays his role of narrator and refocuses the group, asking Daymond what he will do. With his presence in the fashion industry, Daymond may have the connections they need. He expresses interest but says this sort of deal is known as a “designer offer,” which typically means lower equity. He offers them the eighty thousand in exchange for seventy percent equity, versus the fifty-one percent offered. However, he will allow them to buy back to fifty-one percent equity at a later date. The other sharks shed some crocodile tears for Mackenzie and Rachael, claiming that Daymond is being greedy and sexist, as if they wouldn’t try to squeeze any other business owners for all they’re worth. Mark cautions that they may have trouble paying themselves with such low equity, so Daymond sweetens the deal to include a salary for each of them, somewhere in the range of fifty thousand to two hundred fifty thousand dollars a year. Ambiguous, but still significant.

Barbara starts to show some interest, making it clear that more offers are coming, but Daymond tries to limit competition by threatening to retract his offer if they hear the other sharks out. Barbara makes further attempts to look out for the sisters in an attempt to secure a deal herself, advising them to nail down their salaries before progressing. Before she can get another word in edgewise, Daymond offers to bring Mark into his deal, as his Internet expertise will be an asset to developing Litter’s new website. Daymond also asserts his expertise in the field, claiming relationships with the president of Urban Outfitters and the largest distributor of jewelry in the United States. Even Kevin, despite his concerns, throws his hat in the ring for their original offer, eighty thousand dollars for fifty-one percent stake, but Mackenzie and Rachael aren’t sure he brings the necessary connections to the table.

Amidst Barbara’s protests, Daymond draws the line in the sand at twenty-four seconds, borrowing Mark Cuban’s negotiating tactic and homage to the shot clock in the NBA. With three sharks talking at once, under extreme pressure, the young women accept Daymond John’s and Mark Cuban’s deal. This means that they get eighty thousand dollars, salaries, and the ability to buy back up to forty-nine percent equity in exchange for seventy percent initially. Cryptically, Barbara says their deal is “like watching the lambs go to the slaughterhouse,” but Mackenzie and Rachael aren’t so pessimistic. Clearly, they needed guidance as much as money, and they admit that Daymond and Mark were their favorites from the beginning. Even if Barbara or Kevin could offer them more money, there might not have been a magic number.

Still, one should wonder if they entered the Shark Tank too cautiously. Based on sales, their company is worth at least as much as they’re asking, if not much more, and with high potential for growth. Not meeting orders is a bottleneck easily solved by ramping up production, highly possible with shark investment money. Their strategy to move forward – sales, PR, and web development – is simply no solution to a production problem. While Mackenzie and Rachael claim that giving themselves more time to focus on their strengths and spend time with their families is the goal, Litter may still be too close to their hearts for that. They seemed open to the idea, but it’s arguable that selling out to Chinese mass production is exactly the opposite of what they want to accomplish with their inventive, trendy, and environmentally friendly business. It’s hard to say what might have happened if they entered the tank with these questions answered, but for where they are in the process, they still made out well.

A variety of sources suggest that Litter is still successful. Based on social media linked through their website, they’ve been featured in professional publications like Teen Vogue, Nylon, and San Francisco Magazine. Their products have also been worn by celebrities like Lucy Liu, Kelly Clarkson, Lindsay Lohan, and Vanessa Hudgens. Along with this, they’ve been featured on websites like Vogue and Nicole Richie’s blog. Basically, many entrepreneurs get a short bump from Shark Tank before fizzling out, but Litter seems to have a variety of press and popularity from across the fashion spectrum.

On Youtube, Litter has a featured video in which Daymond and Rachael Mann recap their first several months of doing business together. They mostly discuss a collaboration with Selita Ebanks, popular for her modeling work with Neiman Marcus, Ralph Lauren, Sports Illustrated, Vogue, Glamour, and Victoria’s Secret. Specifically, they reached a deal with her line of swimwear, shoes, and accessories called SASS, which stands for Selita’s Accessories Shoes and Swimwear. Ebanks praises Litter for its unique style and adaptability. She tells a story of pitching a custom piece to Mackenzie and Rachael, then receiving the finished product in about a week’s time. More on the style side of things, Litter has a well-designed look book and blog of images featuring their products, as well as frequent new designs.

However, all may not be as it seems. This Shark Tank episode aired in 2012, but most of the press featured on the Litter website dates to 2012 or earlier. Along with that, while Litter’s Youtube channel features references to Shark Tank, it’s difficult to find any mention of it on their website. Additionally, few direct mentions of Mark Cuban’s continued involvement can be found anywhere online. This leads me to wonder: did the deal turn sour? I did have my doubts about the sisters’ motivation to scale up production and outsource their business to other parties, so that might be one source of recent silence. On the other hand, it may just be an undeniable truth of the fashion world: trends come and go. Hopefully, with the business sense of their Shark Tank partners and their own motivation for design, Mackenzie and Rachael can push through any difficulties they may be experiencing and keep Litter afloat.