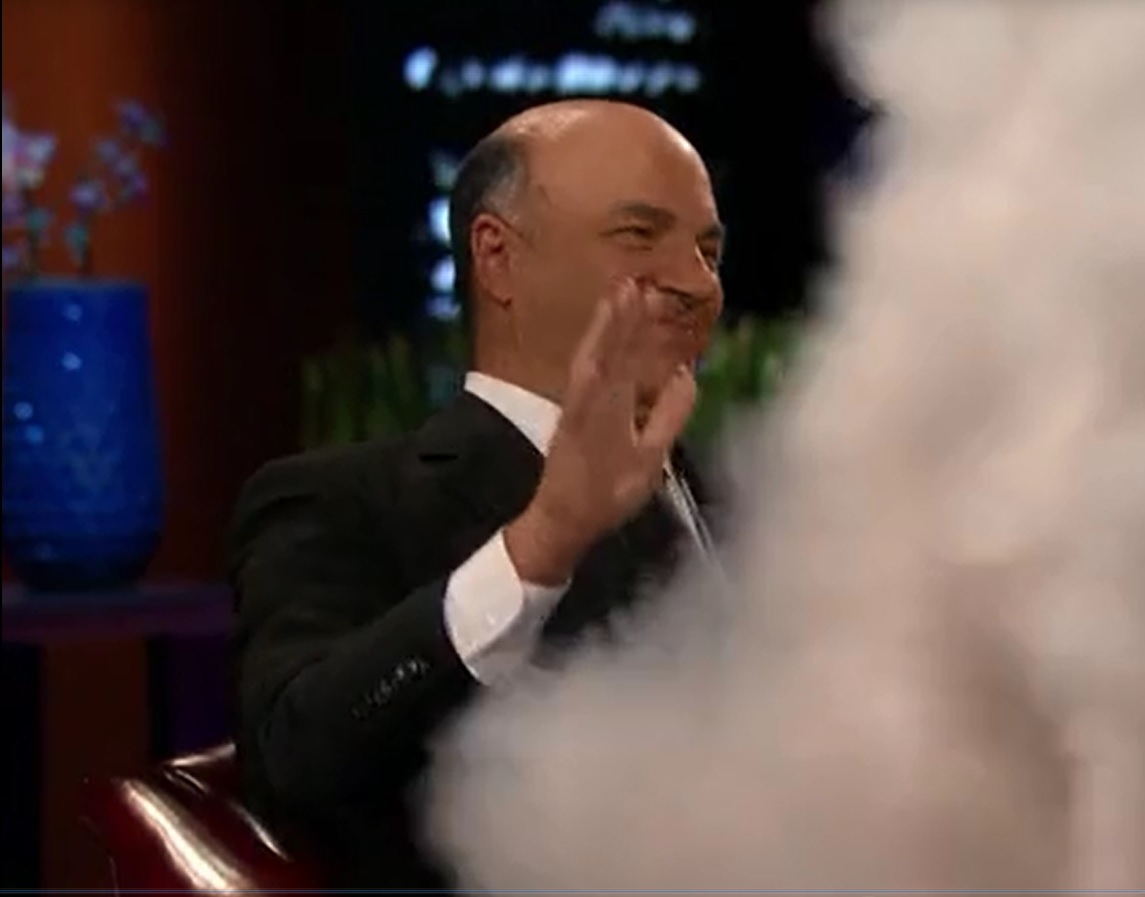 Jerry and Naomi Hancock were already running a successful business a decade before they appeared on Shark Tank, their early endeavors in the food industry had begun with a burrito franchise in 2003. During conversations with customers, Jerry noticed that there was a far greater demand for ice-cream, so the chemistry major and former software engineer started experimenting with a few novel ways to serve ice-cream with a twist.

After researching the use of Liquid Nitrogen in food production, the couple developed the concept of using it to quick-freeze ice cream, right in front of the customer. It took four years of trial and error before they finally developed a process that could make a product of consistently high quality, within a cost framework that would ensure it was profitable. They expanded their burrito franchise to include their new ice-cream range and it was an instant success with customers.

Seeing a far greater opportunity in the ice cream market alone, they left the burrito business behind. In 2004 they opened the first Sub Zero ice cream store in Provo, Utah. It wasn’t long before the couple were licensing franchises for Sub Zero to other entrepreneurs and there were five stores by 2009. By the time of their shark tank appearance in January 2013 there were sixteen.

When Jerry and Naomi appeared on Shark Tank, they were already successful by many measures. They were friendly and considerably more relaxed than many contestants who had appeared before the sharks previously. Not seeking a make-or-break investment, their confidence shone through as they announced they were looking for $300,000 in exchange for a 12% stake in their business.

After Jerry gave the sharks a cold blast of Liquid Nitrogen from across the room to wake them up, Naomi launched into the pitch while Jerry gave a demonstration of the process. Jerry was quick, and with a practiced hand used a large cylinder of liquid nitrogen to turn a dull looking bowl of cream into delicious ice cream. The demonstration looked fantastic, but it was also slightly comical at times, with Jerry almost disappearing behind clouds of dry ice like the Worlds oldest DJ. Within a minute, the ice cream was frozen solid, and the sharks sampled the product.

Naomi explained that ice cream that had been quick-frozen would be creamier than conventionally produced ice cream. The sharks seemed to concur, agreeing almost unanimously.

Daymond however, appeared somewhat cool about it, although whether it was from the blast of Liquid Nitrogen or from the ice cream it was hard to tell. He commented that the Ice Cream tasted awful, the Hancocks both looked more surprised than worried. ‘Does it?’ asked Naomi suspiciously with a grin, ‘No, I’m just messing with you’ admitted Daymond, to a round of laughter.

Naomi explained how overheads were less than traditional ice cream businesses due to the need for less freezer equipment, which also reduced the carbon footprint of the operation.

‘We’re not just re-inventing ice cream, we’re re-inventing the entire ice cream experience’ Jerry announced confidently, as the sharks devoured their samples. The pitch finished off with another blast of Liquid Nitrogen being directed at them by playful Jerry.

‘Before you freeze me I’ve got a couple of questions’ interjected Kevin quickly. He complimented the ice-cream and he liked the concept, but he was concerned about waiting times, he wanted to know exactly how long it took to process each order. Jerry confirmed it was about thirty seconds.

Kevin admitted that his first work experience had been as an ice cream seller, and remarked that his pet hate at the time had been children asking for tasters.

Jerry saw an opportunity there, ‘We don’t have tasters, because its not made yet’ he said, yet again underlining how different Sub Zero was to other ice cream retailers.

Robert Herjavec had some questions, he asked if the appearance of the Hancocks on the show was a ‘retail play’, they agreed that it was. Jerry launched into a brief history of the brand expansion up to that time. The business had steadily grown until, at the current time, there were two corporate stores in addition to eighteen franchises, across five states. There were another eight franchises that were currently being negotiated.

Robert asked about the safety implications of the process, Jerry assured him it was perfectly safe, the use of liquid nitrogen in food preparation was well established. Jerry gave the sharks another quick blast of it from across the room to emphasize the point.

‘What happens if I hire an eighteen year old and they freeze their hand off?’ asked Kevin

The responsible, likeable Hancocks were the sort of business owners who cared about the welfare of their employees. Jerry explained that safety procedures and equipment had been fully developed to negate any possible risks.

Kevin O’Leary, getting back to the numbers, wanted to know what sales figures had been the previous year. $2 million was the impressive answer, and the projection for the current year was in the region of four million dollars.

There were further questions from the sharks about initial set up costs and the costs involved in the development of the product. Eventually, needing to clarify why the couple had not expanded further by this stage, the sharks discovered that they had wanted to buy out a previous partner because of business strategy disagreements. That had cost them half a million dollars, stunting their capital and growth for a while.

Daymond looked concerned, he inquired why Jerry and Naomi wanted another partner, why didn’t they just continue developing the business by themselves as they had been doing with great success.

Jerry admitted that there had been problems with ‘growth patterns’ as he put it. The sharks pressed for more details. Jerry wanted to move into ‘A-Locations’, stadium events and large scale opportunities. He believed that the sharks could provide contacts that would enable him to move into that lucrative market.

Things stayed warm and friendly, but the interest of the sharks cooled off quickly from that point on. The reason might have been Jerry’s admission that the couple primarily wished to obtain valuable contracts using contacts provided by the sharks, or perhaps there were nagging worries regarding the previous business partner who had been bought out after management differences, but either way the sharks were ready to give Jerry and Naomi the cold shoulder

Daymond professed that he was unwilling to devote a lot of time to assisting the company in that way, and dropped out of negotiations with little further explanation.

Kevin O’Leary spoke up, he liked the product and thought the concept was interesting, but not interesting enough for him. He felt that the ice cream market was ‘incredibly crowded’ and couldn’t see the value of the company. Kevin dropped out too.

Robert was skeptical about the whole idea, Jerry and Naomi had lost half a million dollars previously due to buying out a partner, now they wanted another one. Stating that ‘it doesn’t make sense to me’ he politely but firmly refused to let Jerry make a last minute appeal and he left the negotiations.

Lori professed great admiration for the product, the Sub Zero business model and the couple themselves. But she couldn’t see why they needed anyone else, they could succeed on their own. For that reason, she was out.

Mark Cuban was the last shark involved, but not for long. In line with all the other sharks, he loved the idea, and he loved the ice cream, but he wasn’t interested in a deal. He left the negotiations and made it a full house.

Jerry and Naomi may have been unable to secure an investment with the sharks but they didn’t seem too upset at the news. The couple were confident they had given the opportunity their best shot and were fairly unconcerned as they left the tank.

Things have been getting a little heated in the world of ice cream in recent years. It has witnessed the emergence of a growing market for healthier snacks, particularly those aimed at the younger generation. The frozen yogurt market has grown as the ice cream market has declined, but Sub Zero have continued to expand in spite of this economic downturn. The eighteen franchises the brand had in 2013 have grown to 49 in just three years, including locations in China and The United Arab Emirates.

Business publications and comparisons of suitable franchise opportunities consistently rate the Sub Zero Ice Cream franchise as an excellent opportunity available to investors. Jerry and Naomi’s supportive style of management is paying off. Employees have endorsed the business widely, as have the customers. Feedback on the quality of the Ice cream itself is overwhelmingly positive, its fairly unanimous amongst ice cream enthusiasts that Sub Zero has a fantastic product. There are a few negative comments amongst all the praise, mainly about the prices being slightly high, but overall there seems to be a general consensus that the chain is ‘reasonably’ priced.

Jerry and Naomi didn’t face a make or break situation in the shark tank, and ultimately came away without a deal. Perhaps just as valuable to them however, was the huge amount of free publicity they received for both their product, and their franchising opportunities. The business has grown steadily and healthily throughout a difficult time for the market, undoubtedly aided by the exposure the show gave them. Even though the Sharks left them out in the cold, they’ve turned a cool business idea into one which turns an even cooler profit.