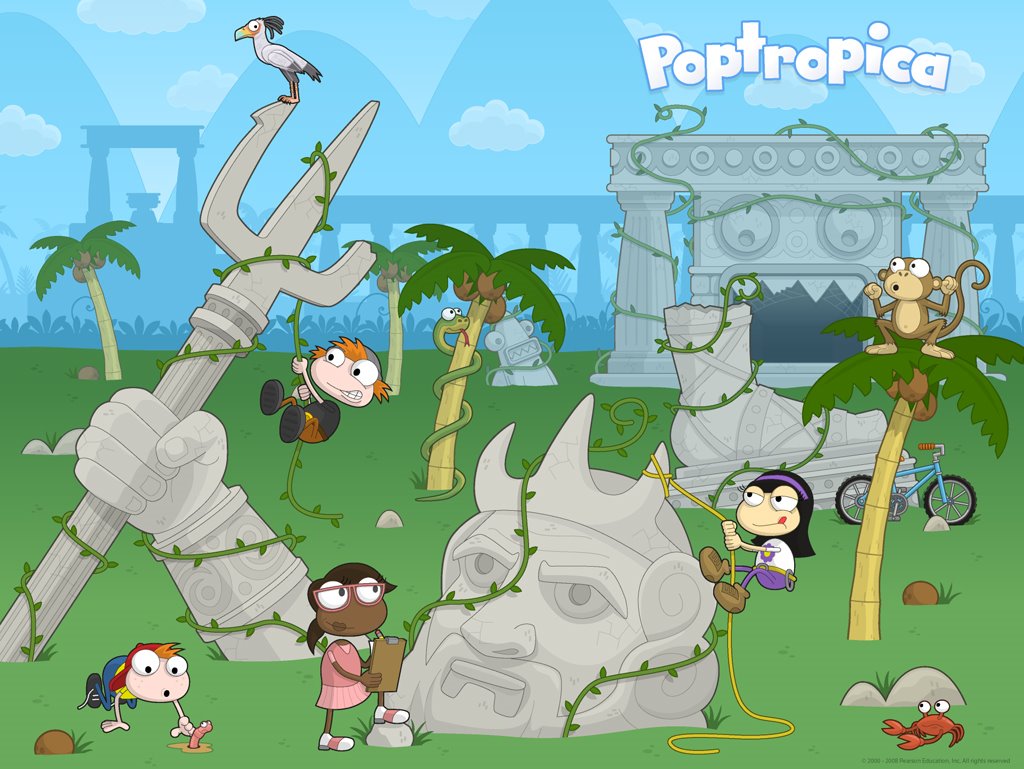 Poptropica is a social, browser-based multiplayer game that hit the Internet in the autumn of 2007. The game was partially developed and written by Jeff Kinney, author of the wildly popular Diary of Wimpy Kid book series. The books are pretty popular now, but I definitely think that they saw their peak around the time that Poptropica was most popular. This was hardly a coincidence, in my opinion. People were drawn to the game’s fun art and zany, subversive writing. It’s unusual for browser-based multiplayer games (especially those aimed at a younger crowd) to be so intelligently written and designed, but this game definitely hits all of the marks.

In Poptropica, you create a character who goes on all sorts of different adventures. These adventures usually involve some sort of story, which winds and twists and takes the player all across the game’s island. In order to reach the end of the story, you have to complete all different kinds of puzzles and mini-games. It may not sound like much, but some of the stories are surprisingly challenging. This higher skill ceiling means that Poptropica is popular across a fairly wide range of demographics.

This game also has all of your standard browser-based multiplayer features — avatar customization, chat, and multiplayer mini-games. However, I think that this game places a much larger focus on story over multiplayer encounters. This game is also updated pretty often, so it always feels fresh. Still, if you’re starting to get bored of Poptropica, you’re in luck. In this article, I’ll talk about some of the top five best games like Poptropica, and why I think they deserve their spot. Without further ado, let’s get right into it.

Like Poptropica, Puzzle Pirates is a game that takes place on an island. Players create a character and are thrown right into, with a lot of different choices as to where to take their gameplay. And the choice is all up to the player. You can make money by playing parlor games, like poker, spades, or hearts. You can join a crew and go on pillages with them, completing puzzle mini-games to increase the power of the ship. You can purchase a shop and hire laborers to make you money. If you’ve ever heard of EVE Online, Puzzle Pirates is a lot like EVE Online, but pirate-themed and for a younger crowd. 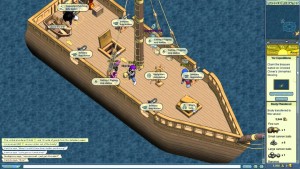 As you can probably guess from the title, the majority of Puzzle Pirates’s gameplay is puzzle-oriented. If you like how Poptropica’s different levels stretch your brain, you’ll probably love this. However, I should note that this game isn’t nearly as story-based as Poptropica is. Puzzle Pirates is more like a true MMO, where the majority of players spend their time grinding for money or experience, or chatting with friends. There isn’t much in the way of an actual campaign, which I why I decided to place this game so low on this list. Plus, there are a few disadvantages that come with having a player-run economy. There are a couple of tiny issues that lead to the game being a little too challenging for people who pillage, which means that the game’s population has died down quite a bit over the years. However, it’s still a really good game, and if you like puzzles in Poptropica, I highly recommend it. 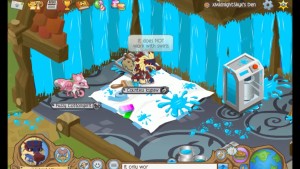 Brought to us by the fine folks over at National Geographic, Animal Jam brings a browser-based multiplayer experience that is as educational as it is fun. In Animal Jam, players choose an animal and create a character. They are then set loose in an island, where they can make friends, play games, and dress up. How is this like Poptropica, you ask? In this game, players are able to complete adventures, which are pretty similar to the different missions that you can complete in Poptropica. There are several adventures available, and players are awarded in-game currency for completing them.

The actual mechanics of the adventures make them slightly different from Poptropica, however. Poptropica’s missions feel a little bit more like point-and-click adventures, and there isn’t much actual gaming involved. Although there are exceptions, you spend the majority of your time thinking, walking, and completing little puzzles. The adventures in Animal Jam feel more like quests in an RPG, having the users consult NPCs to accept the adventure. The actual gameplay plays out like an action RPG, having players attack different monsters to progress through the level. At their core, the “campaigns” are pretty different. Like Puzzle Pirates, this game isn’t quite as populated as some of the other games on this list. It’s on the way up, though. If you’re looking for a good Poptropica alternative, you will probably have a lot of fun in Jamaa. This particular genre of game has always been kind of popular, and I wrote another article similar to this one on the top five best games like Animal Jam. If you like the sound of the game but you want to explore other options, I suggest that you take a look!

Yeah, Neopets is a really old game, but you might be surprised to hear that it’s still active. The game initially released in the early 2000s, and it’s still going strong today. Neopets is a virtual pet game, where players adopt different pets, take care of those pets, and complete different tasks to earn money. This money can be used to purchase furniture for the player’s Neohome, to purchase rare new pets, or to customize the appearance of pets that they already have. It’s a simple premise, and the player doesn’t receive much direction, but this game is popular for a reason. It’s addictive, easy to get into, and gameplay can be mentally stimulating. 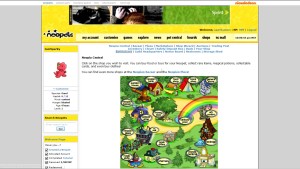 I hesitate to call Neopet’s gameplay actual gameplay, because it doesn’t always feel like a game. There are mini-games that can be used to make money, but the average Neopian makes the majority of their money by managing a storefront or trading. The economy is pretty comprehensive, which I think may be welcomed by someone who enjoys the complexities of Poptropica. Not to mention, Neopets also features a couple of different plots, which are difficult stories that take the player on winding, crazy adventures around Neopia. These plots are roughly on par with Poptropica’s missions, difficulty-wise, and they’re a blast to complete and work out with the player community. This game is still pretty popular, and it’s practically coasting off of its own reputation at this point. If you want a fun, in-depth, active gameplay experience, I recommend Neopets.

In terms of demographic and general tone, Poptropica and Wizard101 are really, really similar. Both games are primarily aimed at early teens, and feature story-based quests as their primary “draw”. In this game, the user creates a young wizard, who completes various quests in the game’s world. The writing in Wizard101 is similar to the writing in Poptropica, in that it can get kind of silly. In terms of gameplay and mechanics, this game is in an interesting place, between Animal Jam and Poptropica in terms of gameplay. Although there are a few puzzles to solve in Wizard101, the bulk of your gameplay will consist of combat, which is turn-based and strategy-based. 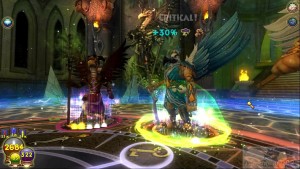 This means that the combat becomes sort of like a puzzle in itself. It requires more thought than you would expect, and some of the quests are quite difficult. Despite this, Wizard101’s emphasis on making the game as family-friendly as possible alienates some of its older users. There are plenty of older teens who play Poptropica, but there aren’t as many older teens who play Wizard101. Fantasy-based MMORPGs are a dime a dozen these days, and most older people will opt for more mature options. A game like Poptropica is so unique that it doesn’t really have problems like that. So, while it’s a great alternative, and very similar in tone to Poptropica, I think that the next item on this list is a little more broadly appealing to someone who may be looking for a new game. If you like what you’ve read about Wizard101, but you’re interested in something a little different, I wrote a piece on the top five best games like Wizard101 that you’re free to take a look at.

Like Poptropica, Club Penguin was pretty much at the top of their game during the mid-2000s. Unlike Poptropica, Club Penguin has been able to maintain that peak. The game has always been pretty popular, but since it was acquired by Disney several years ago, it has only continued to grow and expand. In this game, you create a penguin, who waddles around an island in search of adventure. (What is it with these games and islands?) Players are able to make friends and play games, and use the money that they earn to purchase new clothes, or furniture for their igloo. The reason why Club Penguin was able to reach the top of this list, however, is with their secret agent missions.

Club Penguin has a secret agent storyline, which allows users to interact with different point-and-click style mystery adventures, and they’re really fun. In terms of tone, difficulty, and actual gameplay, they’re pretty much identical to the different missions that you’ll go on in Poptropica. Out of every other game on this list, Club Penguin is probably the most similar to Poptropica, by a large margin. Plus, the game stands on it own pretty well. Although most players are on the younger side, you can always expect full servers. The game is being very actively developed, which means there’s always new stuff to do. I wrote a piece on some other games like Club Penguin, if you’re interested in checking it out.

And that’s that! Those are some of the best games like Poptropica, in my opinion. There are a couple of other non-computer games that I considered putting in, but I decided against it. I tried to stick to the same platform. Did I snub one of your favorites? Feel free to leave a comment below and share your opinion.