Summoners War is an online role-playing game where you can assemble a team from hundreds of characters and do battle with other players or in the campaign mode. Many similar games have appeared on the mobile platform with the same core concepts, so we’re going to check out our top 5 picks for 2018. To others it may sound pretty repetitive with all the collecting and grinding with barely any plot progression, but these games have their own unique twists and surprises to keep things interesting.

Or probably you are out of energy and you’re looking for another game to try while waiting for it to refill. If that’s the case then here are the top five games like Summoners War: 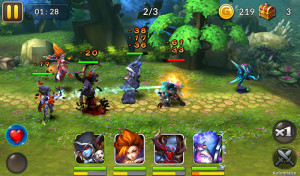 Heroes and Titans Battle Arena is another entry to the turn-based mobile RPG series whose characters look pretty familiar especially if you are a fan of Defense of the Ancients (DotA) or World of Warcraft.

Axe, Sven, and a scantily-clad Rylai are present in the introductory dungeon but with different names. As you progress you’ll see that their abilities are almost exactly the same as their original counterparts. To be fair there are some original characters as well. These heroes start with one ability and can unlock three more later on. Equipment works a bit different in this game. Once you fully equip a hero with all six slots of gear then he / she can be promoted. Promotions unlock a new ability and provide additional health and power but at the cost of destroying all the six equipped items.

Campaign levels become increasingly difficult so you have to ensure that your heroes grow stronger. More of them are unlocked with the use of Hero Spirits obtained from battles or with real cash. Some boss fights have certain phases that require different strategies so picking only the strongest heroes without thinking of their abilities will not work all the time.

There is a dungeon that you can explore without spending energy but this can only be done once a day, same goes for the expedition mode. A guild feature in later levels allows you to team up with allies on dungeons for better rewards. 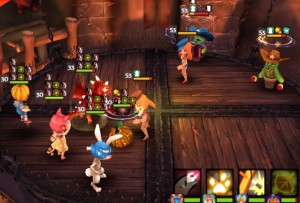 If you feel like playing a game with characters like a rattle-playing cactus or a carved pumpkin then Hello Hero is the one for you. The game features a roster of more than 400 heroes and almost all of them come equipped with two unique abilities. These heroes are ranked from 1-star to 6-star and you should be prepared to commit hundreds of hours if you wanna catch ‘em all. Gold is the primary currency and Carats are the premium ones, and Hello Hero is pretty generous when it comes to the latter.

The battle system is just your usual turn-based combat with the option of choosing what ability your hero will use or you can let the AI do the job. You can play on the six game modes to earn money or new heroes but this will cost you stamina or energy. Once you’re out of juice then you’ll have to wait for it to fill up again unless you’re willing to fork out some dough for a little bit more playtime. It has a real-time PVP mode but will not give you any sort of reward if you win. Players usually rely on that mode to try out specific hero combinations.

Hello Hero is a great if you’re that kind of person who loves collecting characters and battling with them without minding the limitations of energy and stamina. 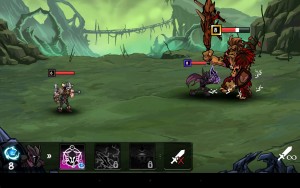 HonorBound starts with a short narration about the plot before making you choose among the five starting commanders. It then takes you through a tutorial regarding the basics of the game like the battle system and researching. The game has a wide assortment of heroes that are categorized into the typical RPG archetypes (warrior, rogue, wizard, etc.) and elemental groups, and they can be included in your squad through summoning or capturing.

The research aspect unlocks new content and abilities that will be immensely helpful for your squad. Exploring dungeons are done by tapping arrows on the corridors. You are also given control of what abilities your squad will use during battle. Aside from the single-player campaign there is an Arena mode where you are pitted against other players with rewards whenever you achieve winning streaks. Its freemium aspect makes itself quite known through an energy bar which depletes with literally every step you make in the dungeon, and the presence of diamonds that tempt you into boosting those research times that take 14 days to finish.

The impressive graphics are accompanied by music composed by Game of Thrones season 1 composer Bobby Tahouri. HonorBound can be another addition to your collection while you’re bound to wait for energy in the other games you play. 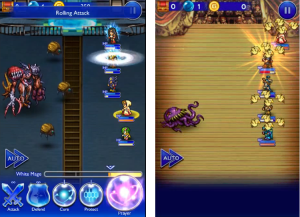 Throughout the years the Final Fantasy franchise has spawned a long list of critically acclaimed games in various platforms. Record Keeper revisits memorable places and events that took place from the first Final Fantasy game up to FFXIV.

Your party of five is composed of characters from the series so yes you can see Zidane and Sephiroth on the same posse. More familiar names and generic characters like the Black Mage are unlocked as you progress through realms. Characters that fight in their native realm while equipped with associated gear will be given bonuses to their stats. Monsters behave exactly how they were in the past games so if you still retain your knowledge on the series then you will know how to fight your enemies in the realms. Stamina is the energy bar of Record Keeper which can be permanently increased by Stamina Shards that can be either picked up or purchased with real money.

Record Keeper can be considered as the ultimate nostalgia trip for fans of the series but there’s nothing much to it. There’s virtually no interaction between characters and it has a very shallow plot. Nevertheless it can still be a good time waster during those long bus trips.

The battles are presented with impressive 3D graphics and may require good specs to run properly. If you don’t mind seeing your favorite heroes take a part-time job on a different game then go ahead and try out this game. 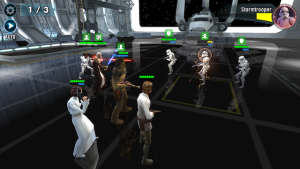 Galaxy of Heroes gives you the chance to assemble all your favorite characters and do battle in many different locations ranging from Endor to Hoth. And it all takes place in a visually-gorgeous Cantina hologame somewhere in a galaxy far, far away.

Collectible characters range from a lowly Resistance Trooper to Kylo Ren himself. As usual with similar games it involves effort or cash to unlock the big names in the franchise. These characters can be strengthened with equipment, and shards that up their star ratings with 7 stars being the highest.  It is also possible to craft gear from components obtained as you progress.

Some characters have abilities that synergize with other members of the team. Take Poggle the Lesser for example. He has three abilities that mostly benefit Droid allies so you should take note of that when composing your team.  It might be cool to assemble only your favorites but it would be better to take their abilities in consideration first especially if defeat becomes a little too frequent.

The game offers many modes that will keep you occupied until you inevitably run out of energy. The campaign is split into the Light and Dark sides with the latter being the more challenging. PVP rewards you with Tokens that can give you the chance to unlock powerful characters. The Galactic War pits you on a string of battles but their health and other statuses carry over to the next fight so you’ll have to be really careful with this mode. Limited time events give you a chance to obtain a character after completing a given challenge.

Fans of Star Wars or mobile games like this will no doubt enjoy Galaxy of Heroes. If you’re still in doubt then at least try a few hours with it and know that I am not using any sort of Jedi mind trick to push you into playing it.

Have you tried any of these games? Do you know other games like Summoners War that are available in 2017?Let us know in the comments below.