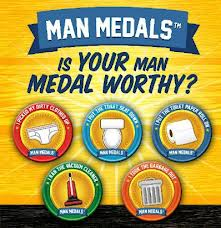 Have you ever wanted to reward your man for good work? Well, Man Medals seeks to remedy this issue. Man Medals are a series of collectible, tacky medallions that can be given to whomever (not just men!) for certain specific, mundane tasks. Read on to find out more about what Man Medals are, and why the founder, Jim O’Brien, appeared on Shark Tank to ask for an investment to create more Man Medals.

Immediately entering the room for this Shark Tank segment is Jim O’Brien, the founder of Man Medals, a company which rewards men for doing good deeds, and a hunk – a nice-looking, muscular man. The Sharks all comment to Lori, telling her to stay in her seat and not get too worked up over a new interesting appearance. Jim introduces himself and says that he is looking for a $10,000 investment in exchange for 10% of equity in his company of Man Medals.

He says that rather than tell the Sharks why he created the company, he wanted to show them why he created it, and jokingly says that he brought his body double, which is the muscular man that had otherwise been silent and looking away from the Sharks and Jim as they were introducing themselves, which elicits a humorous reaction from the Sharks. Jim says that the man would do some typical good deeds, such as flexing while picking up laundry, properly placing the toilet paper roll on the holder, and stick the toilet seat down after finished using. Jim says that his wife would then ask “what do you want, a medal?”

The body double then pulls a sheet down, revealing the six medals that Jim has had prepared, the six

original Man Medals – “I Took The Garbage Out,” “I Picked My Clothes Up,” “I Put the Toilet Paper Roll On,” “I Put the Toilet Seat Down,” “I Ran the Vacuum Cleaner,” and “I Asked for Directions.” Jim says that in the year he has been selling these medals himself, he has been receiving responses all over the world, then asks if the sharks are ready to earn themselves a medal – the body double then pulls out a specially created “I Invested in Man Medals” badge, which had been hidden behind all the other medals.

Kevin says that despite the Sharks receiving bad theater on their television show, this was genuinely entertaining bad theater. Daymond says that he likes the use of the body double, then asks for the two to raise their eyebrow in the same fashion. He has only sold hundreds for a $2,500 investment. Retail for a package is around $5, but each unit is produced for $.60 and sold for around $2.50 to retailers. Lori asks if Jim has done any trade shows or testing of the product, which Jim says is the next step for man-medals. Lori immediately folds, saying that she is out and not interested in the investment. Kevin says that he thinks the valuation of the investment is rather aggressive for such a gimmicky product, but Jim says that he knows that men like to collect random things, and there are some possibilities for the investment to pay off huge. Robert says that he likes the idea, but ultimately he is out.

Jim then uses social media as an example of the driving factor, and uses the “Pet Rock” comparison and says that he thinks there is indeed a business out there. Mark immediately brings up the fact that Jim has only earned $2,500, and also folds. Kevin says that Jim should not even proceed, and also folds.

Daymond is the last Shark standing, saying that he also started out like Jim as a small-time vendor and only made $800 in his first day, similar to a situation that Jim is in. However, at the time, Daymond did not ask for financial help from anybody; he is out of the investment, and folds as well. Ultimately, Jim leaves Shark Tank without an investment.

Since appearing on Shark Tank, Man Medals has not been picked up by any large retailers, but rather by some small souvenir shops and gift shops. Online sales have been strong, with the advent of a new pack of medals as well as expanding the number of medals from 6 to 9. Man Medals is available for retailer and wholesale opportunities, however.