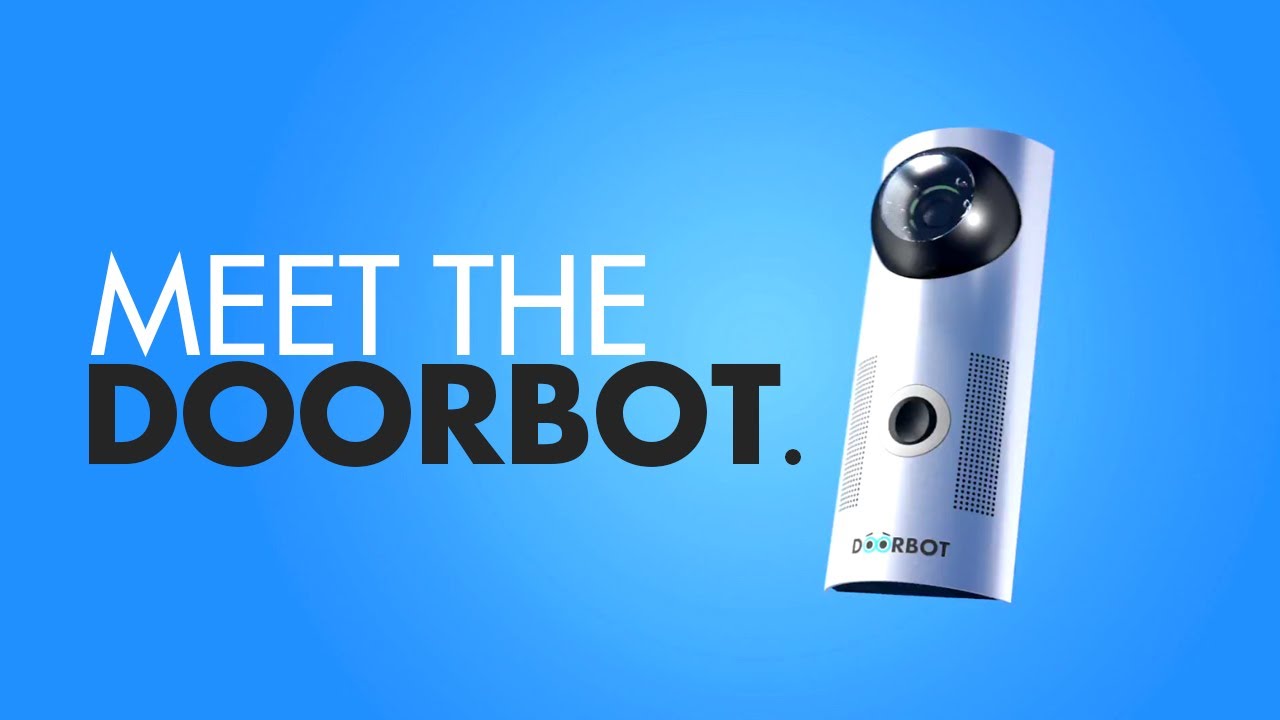 Ever want to check who is at your front door without the risk of allowing a potential intruder to know you’re home? DoorBot is a “smart” doorbell that instead of just ringing, also allows the user to not only communicate but view who is at their door with the use of a companion smartphone application. Read on more to find about DoorBot!

The introduction of this entrant into the Shark Tank is one of the more interesting ones. The music cuts to when the pitchman first steps into the Shark Tank… but then there is a knock. The sharks are visually confused, Mark asks who it is. Jamie replies that it’s him, and he’s here to pitch to the Sharks; Daymond asks who, then eventually call for him to be allowed in. Jamie starts his pitch by saying that it would have been nice to know who was behind the door before letting him in. With Jamie’s product, now you can. He is seeking $700,000 for a 10% stake in his company.

Consumers are currently spending billions of dollars outfitting their home with products that work with smartphones; however, one of the most ubiquitous technologies, the doorbell, has not changed since it was invented in 1880. The DoorBot is the first ever video doorbell built for the smartphone. With DoorBot, the user can see and speak with visitors from anywhere, as long as they have an internet connection. But Jamie didn’t invent DoorBot to just make lives easier; it also adds a new factor of security. Jamie demonstrates with a model of the front of a house next to him. When someone rings the DoorBot, the application accepts a video feed of the call, allowing for the user to speak with the visitor at the front door.

Lori wants to know what happens when the user of DoorBot hits accept; upon hitting accept, the light on DoorBot turns blue, the users’ voice then comes out of it, and it has two-way audio with one-way video. Lori also asks if the camera can be taken off the DoorBot (since the camera is just a large, very visible black ball), and Jamie says that is a great point; burglars want to usually see if someone is home, so they sometimes do ring the doorbell. However, returning to the question, the camera is incredibly hard to remove. DoorBot also has a guaranteed insurance policy, offering anyone who has a DoorBot stolen a completely free DoorBot in replacement. Each unit sells for $199, and costs $81.83 to make each DoorBot as of the filming date. They are sold directly to the consumers, and would be launching to their first retailer of Staples after only 9 months in existence. So far, DoorBot has done a million dollar in sales, and in the last month, they are sold $250,000; all online. Currently, there are no direct competitors, as well; DoorBot is the first video doorbell made for the smartphone, and while other video doorbells do exist, they are not compatible with smartphones. The lowest price competitor would be anywhere from $50 to $100, but these output to a video panel and do not offer communication.

Mark says that he likes the product, but there are bigger solutions that could come and push out DoorBot. Jamie says that the product is meant for your average middle class consumer, and gives his wife as an example; if his wife is upstairs, home alone with their 5 year old, and somebody knocks on the door at 8 PM, she can check who it is without leaving at all, and that this will last for a long time. Mark argues that competition will drive the price down, and introduce more people into the market price and drive down DoorBot’s share. Lori jumps in, saying that she thinks DoorBot has the potential to do a lot more but she is not connecting that DoorBot does enough to distinguish itself from other products with a higher price point, and for that reason, she is out.

Mark is the next shark to fold out of the deal. He explains his reasoning saying that there is not a whole lot of market to scale; the company is worth $7 million under Jamie’s current valuation, but Mark does not see a way to scale that up to a value of $80 million and beyond, therefore limiiting the return on his investment.

Daymond is the next to speak, saying that when he looks at businesses there are three markets he looks at; luxury, middle tier, and lower tier. Obviously the luxury market is $20 and $30 thousand dollar system, and the middle tier are the ADT systems of the world, which will most likely add a service like DoorBot to their repertoire in some sense. Daymond says that he is trying to find where the product goes into the market, and does not feel that this is an investment for him; he is out.

Robert says that he is a security guy, and the idea of having another access point to his house like that freaks him out because ADT and the luxury brands are all hard-wired; they can’t be hacked into by the use of Wi-Fi. A lot of value is priced into the DoorBot, but a lot of the struggle is the fact that it’s a consumer product; the price point might be $199 now, but Robert feels that over time the price is going to drop very rapidly.

Kevin is the last possible investor remaining, and says he wants to make Jamie an offer. Kevin offers $700,000 with a 10% royalty that drops down to 7% after he recovers back his $700,000, and he gets 5% equity of the company immediately. Jamie says that he wants to scale the product up and a royalty would hurt them, as they would be bleeding cash when they need it the most. Kevin points out that they need the $700,000 in order to create inventory, and Jamie says he would rather raise it through a line of credit or venture capitalists. Jamie counters with a $700,000 loan for a 10% interest rate and a 3% equity in the company, which Kevin denies. Ultimately, Jamie does not want to take Kevin’s offer, and declines the offer.

Thanks to Jamie’s previous business experience, he was confident enough to turn down O’Leary’s offer. Since then, the product has moved into Staples, and is being sold through both online and retail locations at a brisk pace. It looks like Jamie even without the investment of the Sharks, Jamie and DoorBot should be doing just fine. If I wasn’t in an apartment complex, I would probably already have one.