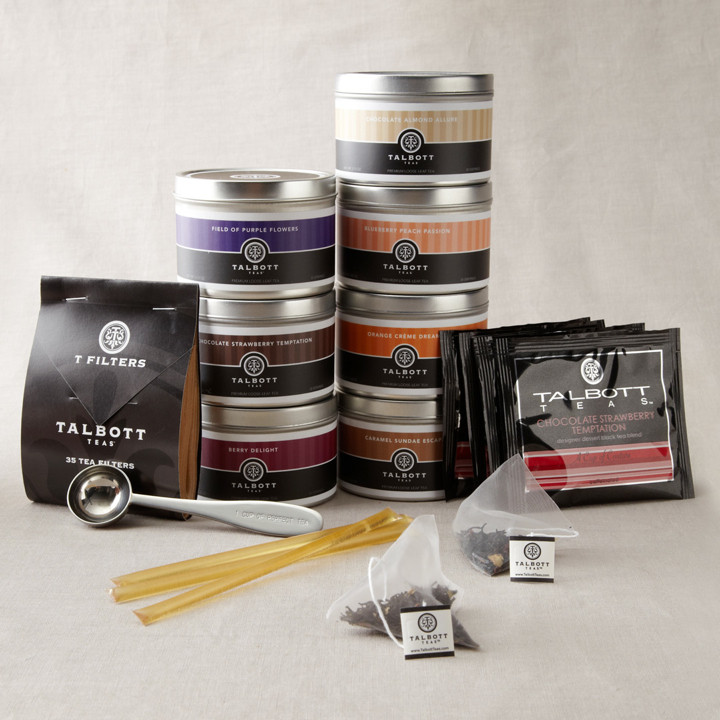 Steve Nakisher and Shane Talbott are long-time business and life partners hailing from Chicago. The two have varied professional backgrounds. Steve is a psychologist, and Shane is a hair colorist, but despite their different career paths, they’ve developed a product they both believe in. Talbott Teas is a designer tea and tea accessory brand that adds relaxation and pampering to people’s everyday tea routines.

The idea was born in the couple’s salon and spa. As part of the pampering experience, Shane served his own blends from a tea bar inside the salon. Customer demand grew along with his repertoire of flavors, to the point where Steve and Shane decided to start packaging and selling the tea. Shane’s relationship with a major celebrity led to Talbott Teas’ big break, but they still needed the sharks’ help to take the business to the next level.

Steve and Shane entered the tank and endured that intense first moment in the spotlight. They held up better than most. After a beat, Steve offered the sharks twenty percent equity in Talbott Teas for two hundred fifty thousand dollars, a one million two hundred fifty thousand dollar valuation. While they both had good chemistry and presentational skills, Shane clearly had a knack for the art of the pitch. To him, brand identity was everything. Talbott Teas is a “cup of couture.” It is glamorous, elegant, and, most of all, indulgent. Their line of products is “steeped in style.” Ever the businessman, Steve chose to launch into the market size. According to him, the industry was large but with few exciting options. The niche of Talbott Teas was a unique combination of luxury and affordability.

After each judge was handed a unique tea sample, they inquired into sales. Did these entrepreneurs mean business, or was Talbott Teas all talk? Kevin was impressed to hear about high and growing sales of one hundred thousand, three hundred fifty thousand, and well over five hundred thousand dollars in the company’s first three years. An appearance on Oprah’s list of her favorite things of 2010 led to a surge in sales and interest from retail stores. As a regular patron of their salon, Oprah discovered the brand through Shane, her personal hair colorist. This wave of opportunity led to the Talbott Teas’ first appearance on QVC. The shopping network submitted an initial purchase order of twenty thousand dollars. After a successful first appearance, this grew ten-fold to two hundred thousand dollars!

Talbott Teas was off to a great start. They had not only convinced the sharks of their professional image and high product quality, but they had also proved that the business worked. When Mark asked where the investment would go, Shane was slightly vague, citing a need for capitalization of growth and business connections, but the sharks seemed to let this go. Instead, they focused on more specifics. Steve estimated their profit margin at fifty percent (before paying themselves), and Shane quoted their retail prices at between ten and fifteen dollars per tin. Kevin was interested in exploring alternate price points, which unveiled the inner workings of Steve and Shane’s business relationship. To Shane, a fan of luxury, marketing their tea as a worthwhile expense was the right move, but Steve was a greater believer in the affordability model.

The sharks were about to learn more. Steve and Shane had invested three hundred thousand dollars of their own money into the business. “You BELIEVE,” Mark remarked. Furthermore, as fifty-fifty partners, they joked that a special system was in place to resolve disputes. “I win!” Shane said proudly, as Steve agreed. More seriously, Steve laid out the division of labor, claiming the business side for himself and the creative side for Shane. Since Shane was now the idea man, Kevin asked him about his five-year plan for the future. Talbott Teas would eventually become an entire lifestyle brand, encompassing more tea accessories and licensing opportunities. When Kevin, as he is known to do, asked where his money would come from, Steve immediately answered with a liquidity event, where the business would be sold for four to five times earnings. Kevin and Steve were on the same page. He was impressed with their business acumen.

Anyone could see the regret on Daymond’s face as he hesitantly left the negotiations. Although very interested in Talbott Teas, his time was spent elsewhere on another similar business, one where he was “losing his shirt.” Mark respectfully backed out as well, saying tea simply wasn’t his area of passion or expertise. Kevin wanted to return to Daymond’s comment. He was concerned with his own potential investment, wondering if the tea business was more difficult than he thought. On the contrary, Daymond called it a great space, saying that “caffeine is the number one drug in the world” but that the owner in his other business was “a bozo.”

After this reassurance, Kevin came back with some measured praise for Talbott Teas. He admired their growing business, as well as the fact that tea is recession-proof. On the other hand, he disagreed with the valuation. To him, the growth trajectory of Talbott Teas was promising but not a sure thing. At five hundred thousand dollars of sales in the current year, he claimed the business was worth half as much as they asked. His offer was two hundred fifty thousand dollars for forty percent. While clearly not enjoying it, Robert agreed with Kevin. To him, Kevin’s current valuation was correct, although several years of growth could change things. He also cited the fact that profits would seem less impressive once Steve and Shane paid themselves, especially considering their large initial investment. Robert bowed out.

Lori was the final domino, also calling into question Talbott Tea’s valuation. The two were forced to return to Kevin, along with his demands for double the equity they offered. “Come to Daddy,” he smirked, relishing being Talbott Tea’s last chance for a deal. Steve reinforced the work he and Shane had done in building a line of products, a brand, and business connections already. The path was laid. Steve, Shane, and Kevin were all in a tough spot, where the business partners weren’t willing to give up forty percent equity, but Kevin wouldn’t budge.

Or would he? In almost a career first, Kevin second-guessed himself on the final offer of forty percent. “I rarely ever, ever change my mind once I make an offer…because I’m a disciplined investor.” The room was absolutely silent as Kevin made sure he had fully considered his options, and no one in the room could believe what they were hearing. Finally yielding, he offered to do the deal at thirty-five percent. Knowing this was the best they could get, without any further discussion, Steve and Shane accepted.

Mark did his best to drive home how this was a groundbreaking event. He called the men behind Talbott Teas “safe-crackers,” since they had cracked the safe where Kevin carefully guarded his riches. Steve and Shane couldn’t believe it, either. With an admiration for his business sense and past successes, Steve called Kevin the best partner that Talbott Teas could hope for. “I did not see that coming,” Shane confessed.

Despite the joy in the room, this deal may be less amazing than it appears. When it comes to investment, a company’s value is often based on a multiplier of its annual revenue. In the current year, Talbott Teas was poised to make at least five hundred thousand dollars Even this number omits their traditionally high results in the fourth quarter. The sharks tried to drive home the company’s low net income, but at profit margins of fifty percent and improving, this seemed like a weak argument. Plus, Talbott Teas had no real weak points in its presentation. The professionalism, design, product quality, and low volatility of the tea business were all points in its favor. So why, after several long minutes of nail-biting negotiations, why did Steve and Shane give up nearly double what they had hoped?

Perhaps Kevin influenced the tone of the room. The situation is reminiscent of the Esso pitch, where Ryan Naylor attempted to sell equity in a line of watches with “negative ion” technology. Despite the blatant pseudoscience, the business had high sales numbers, usually the only thing that matters to Kevin O’Leary. However, Mark Cuban backed out immediately, calling the business a scam. During the Esso pitch, Mark was pivotal enough to dissuade Kevin from investing in a profitable company. In Talbott Tea’s case, Kevin had a major part in discussions and negotiations. He was also the first to give a counter-offer, and since Daymond was the only other shark highly interested in the business, there wasn’t much competition to drive this number down. What we saw was a monopsony, an economy with a single buyer, and, like it or not, Talbott Teas was at his mercy.

A lot has happened since filming Talbott Teas’ original appearance on Shark Tank. Evidently, Kevin has brought a few sharks on board. Daymond was excited about Talbott Teas’ prospects from the beginning, but his hands were tied due to a rocky relationship with a similar business. It looks like he finally escaped from that headache, and along with Barbara, who didn’t appear on the original episode, he’s now happily doing business with Steve and Shane.

With the power of three sharks, Talbott Teas quickly gained attention from Jamba Juice, a large smoothie, fruit juice, and natural food chain. Jamba Juice, particularly its CEO James White, liked Talbott Teas enough to pursue a total buyout. He even allowed Shane to stay on as Vice-President of Innovations, so he can put his creative energy to work in developing new products. While the amount of the sale has not been disclosed, Kevin’s insistence that Shark Tank has made the couple rich speaks for itself. Steve and Shane seem delighted to see their little idea grow into a successful product sold worldwide.

Since the buyout, prospects seem good for Talbott Teas. It can now be found in traditional retail stores like Whole Foods and Wegman’s, as well as Jamba Juice restaurant locations. Since the buyout, Jamba Juice seems to have continued the brand’s image of Zen relaxation, judging by posts to social media and the company’s blog. Recent updates include a personality test to match the test-taker to their perfect cup of tea and a list of tea rituals from around the world. For any other entrepreneur, a total buyout might be bittersweet. Some business owners get so attached to the success of their companies that they can’t let them go. However, for Shane, Talbott Teas always seemed more about expression than building a business. Talbott was simply his vehicle for creation. Only time will tell if the buy-out means a return to life in the salon for Steve and Shane or if they will try their hands at another venture.